Today’s post is the final essay in a four part series that began as different conversations about teaching Mary Jane Logan McCallum and Adele Perry’s Structures of Indifference, winner of The Indigenous History Book Prize, awarded by the Indigenous History Group of the Canadian Historical Association. Each week will will focus on one professor’s experiences teaching the book to undergraduate students and – in the final week – we conclude with a reflection on teaching the book to graduate nursing students. Because we were teaching students from different academic backgrounds and stages of career, we used different teaching strategies. But we shared the pedagogical goal of using an individual tragedy – Brian Sinclair’s death – to encourage students to grapple with the ongoing impact of settler colonialism on Indigenous communities and the structures that shape their lives. 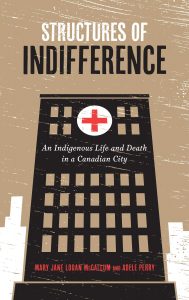 I taught Structures of Indifference to a graduate level seminar (Masters) on the nature of nursing knowledge, in which a central goal is for students to become more familiar with the nature of knowledge development in nursing, including developing critical stances in relation to concepts and issues relevant to knowledge development more generally. The course materials include readings from multiple disciplines including nursing, sociology, history, and philosophy. My approach to teaching is influenced by Foucault’s strategy of problematization and effective history, using both historical and contemporary materials to begin to see and understand the processes through which the past becomes the present. In this context, the critical concern is not so much to understand the past but to understand the present (of nursing specifically). The students are practicing nurses who have returned to school for advanced degrees.

In this seminar we were concerned with the social and situated nature of knowledge acquisition, and with attending to the ways that structured differences influence the production and circulation of knowledge and ignorance. The question that focused discussion of this text was whether ignorance is better understood as a lack of knowledge or whether it is related to specific practices of ‘not knowing’ i.e. is itself a knowledge practice. In exploring the latter stance, Structures of Indifference served as an exemplar of relations of politics, structured power and privilege in consequential and active practices of not knowing. Alongside this text, we read theoretical texts related to epistemic injustice. The goal was to understand Brian Sinclair’s experience and treatment as part of a broader system or collective structure of ignorance and domination informed by the ways that colonialism is lived in the present.

Prior to this seminar, students wrote and submitted guided reflections related to Structures of Indifference, responding to a series of questions intended to support careful reading as well as an opportunity to reflect on their initial responses to the text. I found that this helped students to come to class prepared to discuss events, actors and health system processes that, as experienced practitioners, were highly recognizable to them yet made to appear strange through a less familiar telling. In part it was the careful descriptions of events, what one student described as the ‘telling details’, and the clear analysis of the broader colonial contexts of health care that helped open discussion, prevent falls into defensive postures and focused us on the question of how these events were actually possible. Because, as practitioners, we all knew they were.

Structures of Indifference is effective in different disciplines and stages of academic study for many reasons. The authors’ political commitment to justice for Sinclair’s family and Indigenous communities is among them. Rooted in the histories of a particular place within the context of broader settler colonial patterns of dispossession, prejudice, and marginalization, Professors McCallum and Perry demonstrate that events portrayed in the media as extraordinary are far too ordinary. And students – we have learned by teaching this book – are eager to know these tough histories so that they are better equipped to imagine a different future to guide their work and politics in the present.

Christine Ceci is associate professor of Nursing in the Faculty of Nursing at the University of Alberta. She teaches in Treaty 6 territory, a traditional gathering place for diverse Indigenous peoples including the Cree, Blackfoot, Metis, Nakota Sioux, Iroquois, Dene, Ojibway/Saulteaux/Anishinaabe, and Inuit. She lives Calgary, which is in Treaty 7 Territory.