Ida Martin, a working-class housewife from Saint John, New Brunswick, kept daily entries in a series of five-year diaries from 1945 to 1992. These diaries are the basis of a manuscript for McGill-Queen’s University Press that we are currently revising. They are the focus of the reflections here, which also consider the importance of “life writing” and inter-generational writing contributions to what might be termed a family diary project.   Although the diaries provide a unique glimpse into the social and working-class worlds of post-war Saint John, we initially approached the idea of a monograph with some trepidation, for Ida Martin is Bonnie Huskins’ maternal grandmother. This project has become a manifestation of what Ruth Behar calls “vulnerable writing,” in which one feels more exposed than usual by drawing attention to the personal.Historians have been more reticent than scholars in other disciplines to incorporate the “I” into their research and writing. So how have we overcome this dilemma? How have we negotiated our personal connection to the diarist? 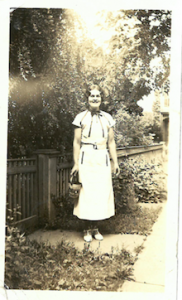 In our interactions with the diaries, we have found it useful to borrow insights from feminist literary scholars. Helen M. Buss argues that having a “special passion” for the “archives of those close to us…encourages the full revelation of bias.”  Literary scholars also point out that “each of us has a certain autobiographical impulse” and that we have an “ethical responsibility to acknowledge and respect” our personal interactions with the source material.

We have found the concept of “life writing” to be a helpful framework for describing our analysis of Martin’s diaries. Diaries allow readers to “explore how women, otherwise often silent in the public realm, represented themselves through writing.” Life writing is an interdisciplinary feminist approach that encourages the “writing out of a life” as well as the personal connection between scholar and subject. In essence, as Mary McDonald-Rissanen has posited, writing in their diaries allowed women to write themselves into existence. As Ida solemnly noted in her diary following the death of her husband in 1986, “I ate supper alone. Lonesome.” Life writing describes and enables collaboration in two forms: intergenerational and the partnership between the authors of this project.

As the diarist, Ida Martin is the centerpiece of this intergenerational life writing exercise. Ida’s daughter Barbara (Bonnie’s mother) has also participated directly in the process of Ida’s diary writing. When Ida occasionally fell behind a few days in recording her memories, she would turn to her daughter for help. Barbara recalls that “almost every night Mom would sit at the back of her kitchen table writing away, and sometimes she would let two or three days get ahead of her and she would…ask [me] to help fill in where she was and what she had done to catch up.” This shows thatadiary, in the words of Gail Campbell, is an “edited version of a life.”  It, and the memories contained therein, is edited by the author and by the readers, including family members and historians, which suggests that the making of memories is highly contextual and contested in terms of objectivity . 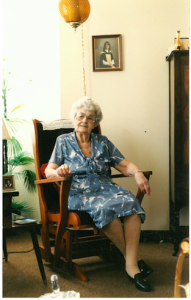 Following in the footsteps of her grandmother and mother, Bonnie represents the third generation in this life writing project.  One of the challenges of life writing, as highlighted by Jayati Lal, is “negotiate[ing] between the positions of insider and outsider.”Bonnie is an insider, and privy to intimate knowledge about family relationships. However, being a relative may blind her to what social distance may reveal about the diaries. That is why Michael Boudreau’s involvement has been so integral to this project. He provides broader historiographical and theoretical insights and a sense of balance in terms of assessing the importance of Ida and her diaries to understanding the past. He has helped Bonnie to see that Ida is more than her “Gram”: she is a multidimensional historical actor with many stories to tell. In the spirit of full disclosure demanded by feminist praxis, it should be noted that Bonnie Huskins and Michael Boudreau are life partners. Collaboration between significant others has generated much discussion and hopefully this blog will spark further debate about life writing, historical objectivity, and how best to negotiate the personal.

We often assume that diaries are intensely private documents, expressions of our innermost thoughts and secrets. We have in our minds a stock image of the diary with padlock and key. However, diaries have traditionally been “semi-public” documents, circulated between friends and family and composed collectively. In the 19thcentury, as Kathryn Carter has demonstrated, “[m]others left their journals out for the family to read; sisters co-wrote diaries; fathers jotted notes in their daughters’ diaries; female friends exchanged diaries; and men published their diaries.”  Ida’s diaries became a key reference source in her family’s efforts to reconstruct their collective pasts. The Martin and Huskins households often settled kitchen-table controversies by calling on Ida to consult her diaries to resolve these disagreements. This may be one of the reasons why Ida wasn’t more introspective: she knew that other eyes would be perusing her diaries.  Indeed, Ida may have felt that the diaries were not hers alone, but the entire family’s.

Another important phase in Ida’s diary writing occurred in the later part of her life.  When Ida became too frail to keep regular entries, Barbara functioned as an alternate recorder.  Initially Barbara attempted to write as Ida, adopting her mother’s voice.  But eventually she and Ida acted as a tag team, with Barbara writing some of the entries and Ida others. This mother-daughter compositional duo became even more intensely collaborative when both wrote the same entries, with Barbara usually beginning the entry and Ida finishing it.  In 1992, at the age of 86, Ida relinquished her role as recorder of the family’s history. Barbara, now in her 80s, is maintaining the tradition by keeping her own journal. Grand-daughter Bonnie admits that she lacks the desire to do so, despite her passion for the past. She hopes, however, that her work on this diary project is an acceptable proxy.

Bonnie Huskins is Adjunct Professor and Loyalist Studies Coordinator at the University of New Brunswick, Fredericton, which is located on the unceded and unconquered territory of the Wolastoqiyik, a place bound by the Peace and Friendship Treaties of 1725-1779.  In addition to the Ida Martin manuscript, she is working on Loyalist Freemasons and eighteenth-century British military engineer William Booth.

Michael Boudreau is Professor of criminology & criminal justice at St. Thomas University in Fredericton, which is situated on the traditional territory of the Welastekwiyik (Maliseet) whose ancestors along with the Mi’kmaq and Passamaquoddy Nations signed Peace and Friendship Treaties with the British Crown in the 1700s. In addition to the Ida Martin manuscript, he is examining executions in New Brunswick, 1869-1957.