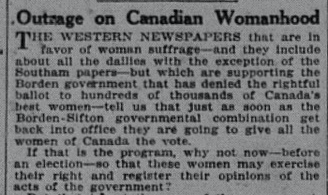 Editor’s Note: As a follow up to our special election series that ran before 21 October, this post is a focused reflection on elections, politics and gender.

We heard a lot about concerns and even scandals around voting and the manipulation of the electorate in the lead up to, and aftermath of, the 43rd federal election. As Colin Grittner noted here before the election, the question of who should be entitled to vote has long been a source of conflict, especially over the question of who should have a say in determining a polity’s future. Women have been central to these debates.

Women first voted federally in Canada in December 1917 under the provisions of the War-time Elections Act, which received royal assent the previous September. This statute and its companion, the Military Voters Act, 1917, are often framed as milestones on the road to universal suffrage. What is often forgotten or ignored in the process is that they were drafted to sculpt an electorate to produce an electoral outcome that the drafters framed as necessary for winning the war. The main goal was to neutralize Liberal support in western Canada, where women were believed entitled to, or indeed already had, the franchise, as did naturalized citizens with roots in places under the control of Germany and the Austro-Hungarian Empire. A combination of militarism and self-interest – the commitments of Robert Laird Borden, Arthur Meighen and others – pushed aside concerns about unfairness, discrimination, empirical evidence and the integrity of elections. Only thus did a select group of Canadian women vote federally for the first time.

This electoral manipulation hasn’t been exactly forgotten in scholarly circles (Carol Bacchi’s 1983 analysis in Liberation Deferred? is dead right), but it is generally omitted from popular narratives about women’s enfranchisement. Instead, we learn that the wives, sisters and daughters of the men who had gone overseas voted federally for the first time in 1917, one more way in which they fulfilled their patriotic duty. We may also learn of  the manipulation of the military vote. However, the rationalizing and the scale of these efforts, along with the almost wholesale disenfranchisement of women in the West and Ontario who expected to vote, generally escape note.

In 1916, Laurier’s Liberals agreed to extend Parliament for a sixth year, but in 1917, in the midst of profound public concern about profiteering on military contracts and the neglect of soldiers’ families, the Liberals refused the Conservatives a seventh year. The Conservatives resented this move as an opportunistic interference with their war efforts. Moreover, with deaths well outpacing enlistments, Borden promised Britain another 100,000 troops and, in May, broke his promise never to introduce conscription.

Westerners strongly supported conscription but worried that they would be forced to send their last sons, and their fathers and husbands (all of whom were necessary for bringing in the harvest as the world teetered on the edge of a food crisis), while manufacturers in central and eastern Canada would keep their war-aged men (and women) busy, safe and gainfully employed in munitions factories. On July 10, 1917, Edmonton’s MP Frank Oliver told the House of Commons that Alberta had sent 55% of its military-aged Canadian- and British-born men, while Saskatchewan and Manitoba had sent 45% and BC 43%. Ontario had sent 36%, and the four eastern provinces ranged from 13% (Quebec) to 29% (New Brunswick).

The western provinces were forcing the Conservatives’ hand on women’s enfranchisement. By early 1916, two federal seats in Manitoba awaited by-elections, and Manitoba had enfranchised women. Subject to differential treatment for individuals specifically disqualified, the Dominion Elections Act gave the federal franchise – outside Alberta, Saskatchewan and the Yukon – to “persons” who were provincially enfranchised: could Manitoba women therefore vote federally? Alberta and Saskatchewan were about to enfranchise women as well. In the House of Commons debate on February 28, opposition members urged the government to clarify matters by enfranchising all women, or at least those who were provincially enfranchised. They reminded Borden that he had encouraged women to seek the provincial franchise when they asked him about the federal one. Nonetheless, Conservatives stalled, with the party whip, Robert Rogers, more or less suggesting that Manitoban women might resort to extralegal ballot-stuffing, as, he alleged over considerable protest, had taken place in Saskatchewan in 1912.

On May 12, 1917, pursuant to regulation, Ontario became the fifth province to enfranchise women (BC was fourth). Four days later, after the Conservatives had repeatedly postponed debate on the issue, Justice Minister Charles Doherty told the House of Commons that in his view, women were not “persons” under the Dominion Elections Act. He rejected Wilfrid Laurier’s argument that in a federal system, the electors in a province should be a uniform set of people, who targeted their complaints and proposals at whichever level of government had jurisdiction. Debate ended inconclusively. Two days later Borden opened the conscription debate, and the question of women’s enfranchisement was postponed until September 6, when debate on the War-time Elections Act began.

By the time Secretary of State and Solicitor General Arthur Meighen introduced this Actand the Military Voters Act, 1917, an election was on the horizon, Quebec was deadset against the Conservatives over conscription, and western votes mattered. Leading western Liberals who supported conscription had been drawn into Borden’s “Unionist” cabinet, fortifying its appeal. Linking voting to fighting, Meighen framed the statute as necessary for ensuring that the opinions of the true voters of Canada – the men who were fighting overseas, convalescing in hospitals, being held as POWs, or indeed buried in France and Flanders – were expressed. Even though Canadian women had admittedly served the war effort heroically, enfranchising only the soldiers’ female kin was “the best way to repair [the] injustice” of having an election when some of these true subjects could not vote.

The War-Time Elections Act was “class legislation,”[1] historically considered constitutionally objectionable in Canadian thought, as it singled out particular “classes” of people for differential legal treatment. Only women who were the wives, widows, mothers, sisters or daughters of people serving or killed overseas or in the navy would vote. Those other women in the West and Ontario, whose sympathies were suspected to lie with the Liberal governments that had enfranchised them (other than in Ontario, where the Conservatives suddenly jumped on the bandwagon in the spring of 1917), could just keep knitting, sewing and donating for the “boys” abroad.

Also barred from the polls were conscientious objectors, Mennonites and Douhkhobors (actually exempt from military service), and most men naturalized since March 31, 1902 who were born in territory under the control of the Central Powers, but not Syrian or Armenian Christians or immigrants from France, Italy or Denmark who came to Canada before their territories were occupied. The Act also disenfranchised on the basis of mother tongue. Disenfranchising conditions were lifted for those who served in an allied military or whose grandchild, child, sibling, spouse or parent did. Western members protested strenuously about applying the stigma of disloyalty to their constituents, many of whom, such as Ukrainians, had no sympathy for Germany or Austria, but the Conservatives maintained that as such people were ineligible for the draft, they would be barred from voting. Laurier Liberals called this nexus between citizenship and service militarism.

The disenfranchisement regime was so complicated that the Edmonton Bulletinran a regular “Dear Abby”- type column called “Have I a Vote?” The enumeration process drew complaints about Unionist enumerators asking for political views and refusing to list Liberal-leaning voters. Naturalized Americans were warned to carry their papers with them to the polls. And on it went. The Military Voters Act had enlarged the earlier 1915 military franchise, so that British subjects who had never lived in Canada but served in Canadian forces could vote, and the voting mechanism provided enticing opportunities to pressure soldiers in marking their ballots and to encourage them to choose advantageous ridings in which to have their votes count. Between them, the two statutes excluded women who might have voted for the Laurier Liberals and enabled the soldiers’ votes to stretch farther.

The Unionists ultimately won because Liberals had joined Borden: Liberals well outnumbered Conservatives in the new parliament, but Unionists outnumbered Laurier Liberals. Unionists proceeded with conscription, and wedges were driven deeper between French- and English-speaking Canadians, between the native-born and the naturalized, and between central Canada and the West.

It is true, then, as the websites tell us, that women first voted federally in December 1917, but the Conservatives’ main goal was to make sure that the majority of women in the West did not vote. That bears remembering too.

Lyndsay Campbell is an Associate Professor cross-appointed between the Faculty of Law and the Department of History in the Faculty of Arts at the University of Calgary. Her research is largely about expression, race, Canadian constitutional assumptions, and the relationship between law and social norms between about 1790 and 1914 in Canada and the British-American Atlantic world.