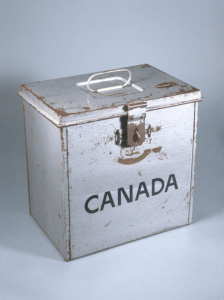 Editor’s note: This post is the final one in our special series on the history of elections in Canada.

Canada’s 43rd federal election takes place this Monday, October 21st. By now someone somewhere has probably told you why, as a Canadian voter, you really ought to vote. That person may have told you that you make your voice heard when you vote, or that you can change the future when you vote, or that it strengthens our democracy when you vote. Those are all good reasons. Noble even. As an historian who studies electoral enfranchisement in Canada, I have another reason for you if you’re looking for one. At some point over the last 200 years, and within a space known as Canada, the vast majority of you wouldn’t have had a vote. In fact, the Canadian state would have done all it could to ignore you, silence you, and keep you from the polls.

Today only a couple of restrictions remain on voting in Canada. As Elections Canada tells us, all qualified voters must be Canadian citizens and at least 18 years old on election day. Of course, this wasn’t always the case. Throughout Canadian history, Canadian legislators prevented all sorts of Canadians from voting based upon who they were, what they looked like, and how they lived. Famously – or should I say infamously – Canadian women didn’t secure the federal franchise until 1916 and didn’t vote in federal elections until 1917. During the two World Wars, many German, Austrian, and Italian Canadians had their votes denied as “enemy aliens.” Canadians of Chinese and South Asian descent suffered disenfranchisement through to 1947, and Japanese Canadians to 1949. It apparently took the United Nations’ Universal Declaration of Human Rights and Freedoms, and the debates that surrounded it, to finally make these disqualifications indefensible.[1] Two years after this Declaration, in 1950, Inuit finally received the federal vote. Even so, First Nations had to wait a full decade longer, until 1960. Undergraduate students might find it shocking that 18-to-21 year olds had no votes until 1970, even though the army would have happily accepted their enlistment (making them “old enough to kill but not for votin’”, as Barry McGuire once sang). In fact, it took until 2002 for the Supreme Court to strike down the last blanket restriction on adult citizens when it overturned the disenfranchisement of federal prisoners (unless, of course, you think Canada should drop its voting age to under 18).

If we travel back in time a little further, we can find even more restrictions heaped on to the ones listed above. Aside from these disqualifications grounded in gender, race, and age – all of which originated in the nineteenth century, if not earlier – Canadian men before and after Confederation also faced limitations on voting based on what property they possessed. After Confederation, leaseholding generally offered enough to prove a man’s contribution to society to grant him a vote. Before Confederation, and especially the further we move away from Confederation, men not only needed to own the property on which they lived but they needed to do so beyond all debts. Younger men who still lived at home wouldn’t have had votes; older men who had debts (such as mortgages) wouldn’t have had votes either.[2] As a vaguely Northern European-looking man with a vaguely Northern European-sounding name who’s spent longer in postsecondary institutions than he’d care to admit, I recognize that I occupy a position of privilege in society. Even so, I can think of at least two reasons why I myself would have faced disenfranchisement sometime over the past two centuries: whether because of who I am (that vaguely Northern European surname is actually German) or because of what I possess (maybe someday I’ll own property beyond all debts).

To bar these different groups of people from voting, Canadian legislators found all sorts of colourful ways to describe their apparent shortcomings. Women were portrayed as delicate, capricious, and weak-willed; the mention of women voting elicited laughter or worries of family instability. People deemed too young to vote were viewed as inexperienced, uneducated, and dependent on their parents. Racialized groups were presented as transient, unassimilable, and dangerous to so-called Canadian ways of life. Canadian law treated Indigenous peoples as wards of the state and legislators called them a variety of derogatory names. Even though the dispossession of Indigenous peoples’ traditional and ancestral lands served as the basis for settler enfranchisement, the Canadian state rejected Indigenous reserves as sufficient grounds for Indigenous electoral participation. Outside of these marginalized groups, men who didn’t lease or own enough property beyond their debts also received their own unpleasant descriptors: from intemperate and thriftless to dissipated and useless. Nastier legislators went further, calling these men the “refuse of society” and the “scum of the earth.”[3]

Despite these restrictions and descriptions, those without votes still looked for ways to participate electorally. Especially before Canadians adopted the secret ballot during the 1870s, early Canada had a long tradition of non-voters exerting influence at the polls. While these exertions were usually peaceful, most were loud, some were coercive, and some were even violent. For their efforts, those who simply wanted their voices heard found themselves lumped in with thugs, toughs, and ruffians. Bourgeois commentators belittled them by calling them “the masses”, “the throng”, or “the mob”. Barricades were erected to keep those without votes as far away as possible. Municipalities deputized special constables, and armed them with special truncheons, to beat non-voters away. During particularly turbulent times Canadians saw armed soldiers at the polls, ready to point rifles at those who supposedly didn’t belong. People died as a result.[4] Even into the twentieth century, elections officers took glee in denying the registration of racialized Canadians. Vancouver’s Collector of Votes, for instance, once refused to resign even after securing another job because he believed it his sworn duty to resist what he called the city’s “Mongolian hoards” (including, specifically, Won Alexander Cumyow).[5]

Elections Canada tells us these days that “It’s Our Vote.” It wasn’t always our vote. Based on Canada’s past laws, Canada would have rejected the electoral participation of the vast majority of us at some point over the past two centuries. So, if it bothers you that someone who looked, sounded, or lived like you wouldn’t have had a vote, maybe think about voting on Monday. Or at least decide why, for important political and national reasons, you might actively choose not to vote. At an earlier time in Canadian history, you might have been disenfranchised. Now that you have a vote, and free use of that vote, exercise that vote. Don’t disenfranchise yourself.

Colin Grittner currently teaches at Douglas College and is completing a book on electoral enfranchisement and civic participation in nineteenth-century British North America. In case it wasn’t obvious, he thinks you should consider voting on Monday, October 21st.

[2] In fact, before Confederation, somewhere between 78% and 95% of all inhabitants didn’t have a vote depending on time and place: John Garner, The Franchise and Politics in British North America 1755-1867 (Toronto: University of Toronto Press, 1969), 217n2.

2 thoughts on “Another Reason to Vote on Election Day”