It appeared of great importance to ascertain, if possible, the precise influence which school training exercised on the health of native children…

The Indian schools in Canada afford a total annual death rate of 12 ½ per 1,000 for both sexes; but the mortality of girls is nearly double that of boys…

Making allowance for native children dying at home, we shall be within the truth in assuming the mortality of native children at school as double that of English children of the same ages [emphasis added] …

In 1863, Florence Nightingale – best known as the founder of modern nursing – published a statistical report on the health of Indigenous students in day and boarding schools across the British Empire. As these selections from her text suggest, the situation looked bleak.

I came across Nightingale’s work over the weekend, after listening to Lynn McDonald on CBC’s Fresh Air discuss the famous nurse’s turn to statistics and her concern with the plummeting populations of peoples whose land was increasingly occupied and commodified by Britain, its emigrants, merchants, and industrialists. 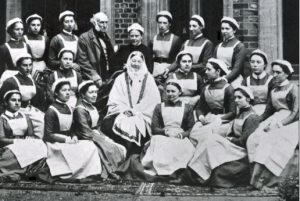 Florence Nightingale (middle) in 1886 with her graduating class of nurses from St Thomas’ outside Claydon House, Buckinghamshire (Wikimedia Commons)

What struck me most in this CBC interview was a sense of missed opportunity in the nineteenth century for a change in policy and approach. At its core, Nightingale’s argument in the report is this: colonial statistics are poor – almost useless – but what statistics she could compile suggest real health problems for Indigenous children attending colonial schools. While she does not directly blame settler colonialism for these health issues, her short report called for reform in how these schools were run.

As the TRC’s final report reminds us in vivid detail, in Canada, reform did not come until the late 1960s – over a century later.

What may surprise some readers, though, is that despite its 1863 publication date – indeed, it was penned several years before residential schools became a systematic, government-led form of oppression and re-education – Nightingale was neither the first, nor last, to call attention to the risks colonial schooling posed for Indigenous students.

Bromley’s report, which ultimately led to the school’s closure in 1826, outlined several cases of sexual assault and misconduct, the exploitation of children indentured to local settlers, a decrepit building, and – hardly surprising given the other findings – relatively little engagement by the so-called students with any actual teaching and learning.

Being brought up in a menial capacity the good effects which their education might be supposed to have upon their character are counteracted by the generally bad examples they witnessed the degradation which they naturally feel under an involuntary and indented servitude.

Like Nightingale, neither Bromley, nor West – being products of the British age of empire – rejected the idea of assimilative colonial schooling as a social good. Upon closing Sussex Vale’s doors in 1826, the New England Company turned its attention westward, opening the Mohawk Institute at Six Nations, in Upper Canada, two years later. Nonetheless, both Bromley’s and West’s reports – marking the beginnings of the very first residential school in Canada – call attention to the embedded, and structural, abuses that plagued the residential school system throughout its two-hundred-year history.

Bromley and West reported on school conditions forty years before Nightingale’s more comprehensive investigation. Forty years later, in 1907, Peter Bryce – the Indian Department’s chief medical officer of health – penned a damning report that aligned tightly (though seemingly unknowingly) with her conclusions. Of the 1,537 students enrolled in the 15 schools he examined, 24 percent had died. Like Nightingale, Bryce faulted tuberculosis, and a combination of poor upkeep and curriculum at the schools. As in Bromley’s and West’s reports, a key problem remained the dearth of “high quality” staff.

All these reports fell on deaf ears. Seeing little change over the decade that followed, Bryce wrote The Story of a National Crime. Published in 1922, this short booklet not only chronicled his earlier findings, but also the Indian Department’s suppression of them.

It would be another 47 years – in 1969 – before substantive action began to dismantle a system that had become a key pillar in the history of North American genocide.

That, from across an ocean, someone like Florence Nightingale could call attention to systemic – and life-threatening – failures in Britain’s imperial efforts at re-education, begs questions about how these institutions were understood by the public, both at home and abroad. That these critiques were made so publicly, at times directly to the very bureaucracy that administered the schools, without effecting change, should call attention to our own situation today.

We like to think that the abuses of the past might have been avoided if only decision makers and the public had known about them. In these cases, the information was available, and change did not come. The unheard voices of Bromley, West, Nightingale, and Bryce suggest that perhaps we need to do a better job of listening.

Thomas Peace is an assistant professor of history at Huron University College.

2 thoughts on “If we had only known… whistle blowers, Florence Nightingale, and residential schools”