Growing up in south western Uganda, I would hear whispers of stories told in hushed tones; stories of what the River Kagera had brought in 1994 and of the then on-going Lord’s Resistance Army (LRA) insurgency in Northern Uganda. The latter stories were relayed to us by people who had not been in northern Uganda. Going through school in the early 2000s, the curriculum was silent on the ongoing conflicts at the time. Although we learned of the rebellions leading to independent East Africa, I can see in hindsight that there was a notable silence on how the aftermath of those rebellions was handled. My young self was thus unaware of and removed from the multiple gross human rights violations that were happening in my country.

That stories need to be told is an understatement. Stories break the shackles of ignorance and tear down barriers as people gain a more nuanced understanding of their past and how it is actively shaping their future. Untold stories are like ulcers that continue to feed on the fabric of society even after the “guns go silent.” Failure to create spaces to share untold stories become active forms of silencing and a recipe for future conflict. The disruptions caused by conflict often remain unknown, which makes for an even stronger case for stories to be told. Communities need to reckon with their shared past and different experiences without negating other people’s accounts. Telling stories is a way of giving space to persons who have lived through tumultuous times and to acknowledge diverse histories whose trajectories are often otherwise erased. Acknowledging lesser-known parts of our history (whether they damn us or glorify us) is important for all generations, especially when this knowledge can inform policies, laws, practices, and frameworks that avoid repeating past wrongs.

Since 1999, our team at the Refugee Law Project (RLP) has worked with forced migrants of conflicts to help ensure that they live dignified lives. This work has taught us many lessons about what people perceive as “justice,” not least the significance of curating spaces to voice stories that are otherwise unheard or glossed over. The methodology of travelling testimonies, developed by our organization under the thematic programme of Conflict Transitional Justice and Governance, is one example of how we curate such spaces. This methodology continues to be informed and shaped by the team at the National Memory and Peace Documentation Center (NMPDC) in Kitgum, Northern Uganda, as they continue to visit and engage communities by using a range of catalogued artefacts to generate dialogue on what is, for most, a complex past. The NMPDC is a space under the auspices of the Kitgum District Local Government that front memorialization through different exhibits and cultivates discussions around the complex history of conflict in Uganda.

A key question that reverberates around many community engagements is, “Lweny dong otum?” Literally translated as “So, is the war really over?” this question also asks, When is the right time to tell stories? When is too early and when is too late? What needs to be in place for these stories to be told?

The exhibit “Ododo Wa” (“Our Stories”) is designed to draw on and sympathetically reflect the voices of Grace Acan and Evelyn Amony, two courageous returnees from LRA captivity. The drawings and artefacts, as well as two short films, appear as extensions of Acan and Amony. For me, viewing it for the first time, I felt a need to stop, draw deep breaths, and talk about these stories I was never told as a child.

The launch events in Kampala brought together Acan and Amony’s family members who were there to support and to participate in sharing their side of the story and what the exhibit meant to them. There were notable moments of acknowledgement as they watched the two short films together.

When the exhibit subsequently travelled from the Uganda National Museum to the NMPDC, the community in Kitgum engaged deeply with the content. There was a sharing and affirmation of histories that were familiar to some and unfamiliar to others. This was coupled with an acknowledgement that stories like these allow communities to collectively reflect on the past, to discuss present situations, and to be energized to face the future.

The launch of the exhibit thus not only marked a milestone in individual healing journeys, but also the resuscitation of spaces to talk in areas affected by the insurgency of the LRA and military response of the Ugandan army, the Uganda People’s Defence Forces. The exhibit echoes and affirms the fact that those with these stories tell them best. It calls us to pay attention to what that means for continuous healing journeys and processes in Uganda.

As Dr Chris Dolan (Director of RLP) stated at the launch of the exhibit in Kampala, presenting “Ododo Wa” at the Uganda National Museum was an important step in escalating attention to the story of northern Uganda onto a national stage. This mirrors the goal of the exhibit: to reflect and generate further conversations on the need for justice and reparations to the victims/survivors of war. 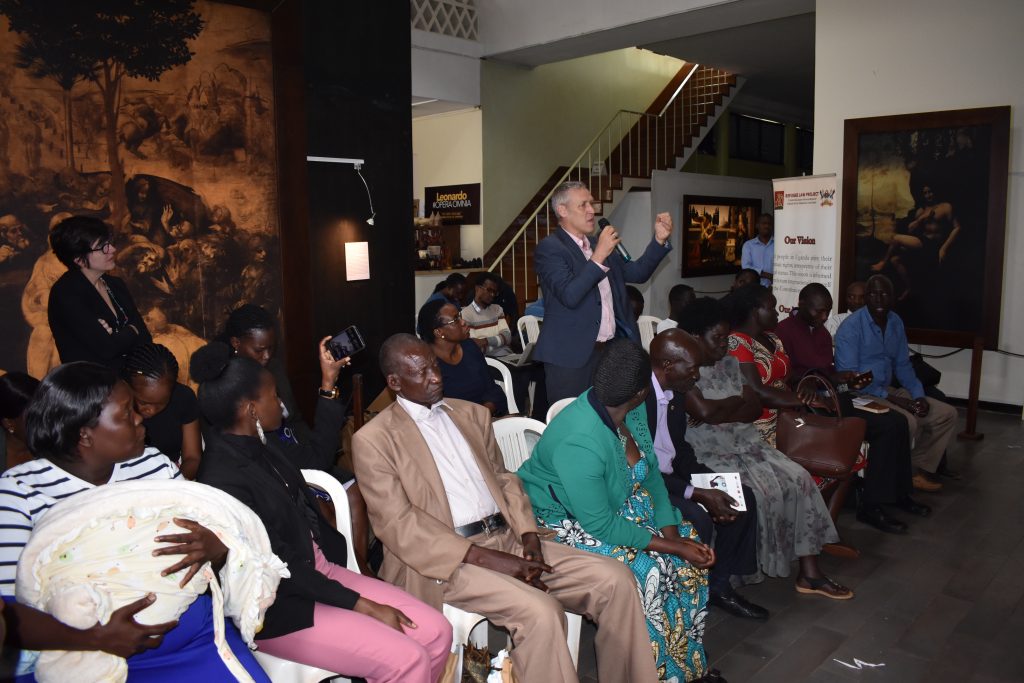 An exhibit such as “Ododo Wa” is an invitation to participate in the cartography of healing and the definition of collective justice for the areas and persons affected by conflict. It offers an opportunity to witness and even contribute to the story. During the launch, Nelson Abiiti (Principal Conservator at the Uganda National Museum) emphasized the significance of having an exhibit such as “Ododo Wa” tour through all parts of the country. As a result of his direct lobbying, the exhibit spent more time at the Uganda National Museum before being displayed in other venues. This, of course, stirs up questions on what it means to have a national perspective and narrative while also providing some answers on who should shape this narrative, namely those like Acan and Amony with stories to tell. 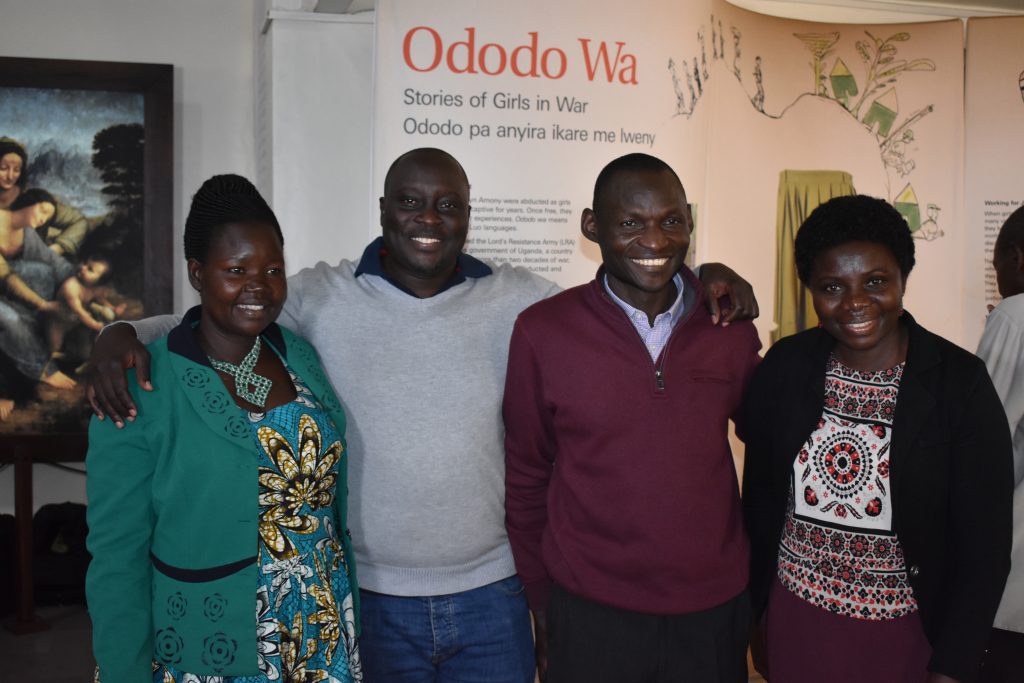 (From left to right) Evelyn Amony, Francis Nono of the Refugee Law Project, Nelson Abiti of the Uganda National Museum (UNM) and Grace Acan stand in front of the traveling “Ododo Wa” exhibit during the launch event at the UNM, Kampala, December 2019. Credit: Refugee Law Project

We must hope that, once current travel restrictions arising from COVID-19 are lifted, the “Ododo Wa” exhibit will head to other countries. When it reaches Sierra Leone, for example, we hope that it will not only bear lessons on who should tell the stories and what needs to be in place for stories to be told and listened to, but that it will also generate new lessons on how an exhibit can draw on similarities from other contexts to trigger storytelling in different locations.[i]

Gilbert Nuwagira (@gnuwagira) is the Personal Assistant to the Director of the Refugee Law Project in Uganda. He finds that his work puts him at the intersections of programming, advocacy and planning within the fields of forced migration, transitional justice and human rights. He is enthusiastic about participating in the creation of spaces that foster self-representation. You can reach him via email at padir@refugeelawproject.org.

[i] Please follow @refugeelawproj, @CSiWproject, and @CMHR_News for updates on the “Ododo Wa” exhibit as it journeys on to Sierra Leone in the coming months.

One thought on “Resuscitating Stories: Some reflections on the “Ododo Wa” exhibit and experience”