Much of my life is full of ups and downs, and I know it will keep moving on like that. At the age of 11, turning on 12, I was abducted by the Lord’s Resistance Army (LRA)—a group of rebels that fought against the Ugandan government for over 20 years. Before my abduction, I lived with my parents and went to school in Gulu, a small town in northern Uganda. I was separated from my family and held captive for over a decade. Like many other abductees, I was taken to southern Sudan where I lived in an LRA camp. And, like many other girls, I was forced to marry a commander and to bear children.

I narrowly escaped death in 2005 when I was captured with my newborn child in a military ambush by the Ugandan army. The green skirt I was wearing that day is displayed in the exhibit presented at the Canadian Museum for Human Rights (CMHR) in Winnipeg, Manitoba. It bears holes from the bullets that grazed my body as I put my arms up, holding my baby above my head.

When I returned home, I was not able to talk about my experience in captivity and the suffering I had endured. I was too depressed. I was taken as a child, raped, and enslaved. Over the years, I found the courage to speak and to write about my experience. I published my memoir I am Evelyn Amony: Reclaiming My Life from the Lord’s Resistance Army in 2015, 10 years after my return.

The drawings that make up the design of the “Ododo Wa” exhibit highlight how we first began to tell our stories. From 2009 to 2011, many war-afflicted women joined together and took part in a storytelling project by the Justice and Reconciliation Project. Each woman in our peer support group would draw something and then talk about it. For example, we would draw maps detailing the settings of LRA camps and the homes of commanders. This would lead to conversations about the strict rules that governed everyday life in the LRA. Even though our homes were close-by, we were not allowed to visit or speak to one another. We could go months without speaking to one another. 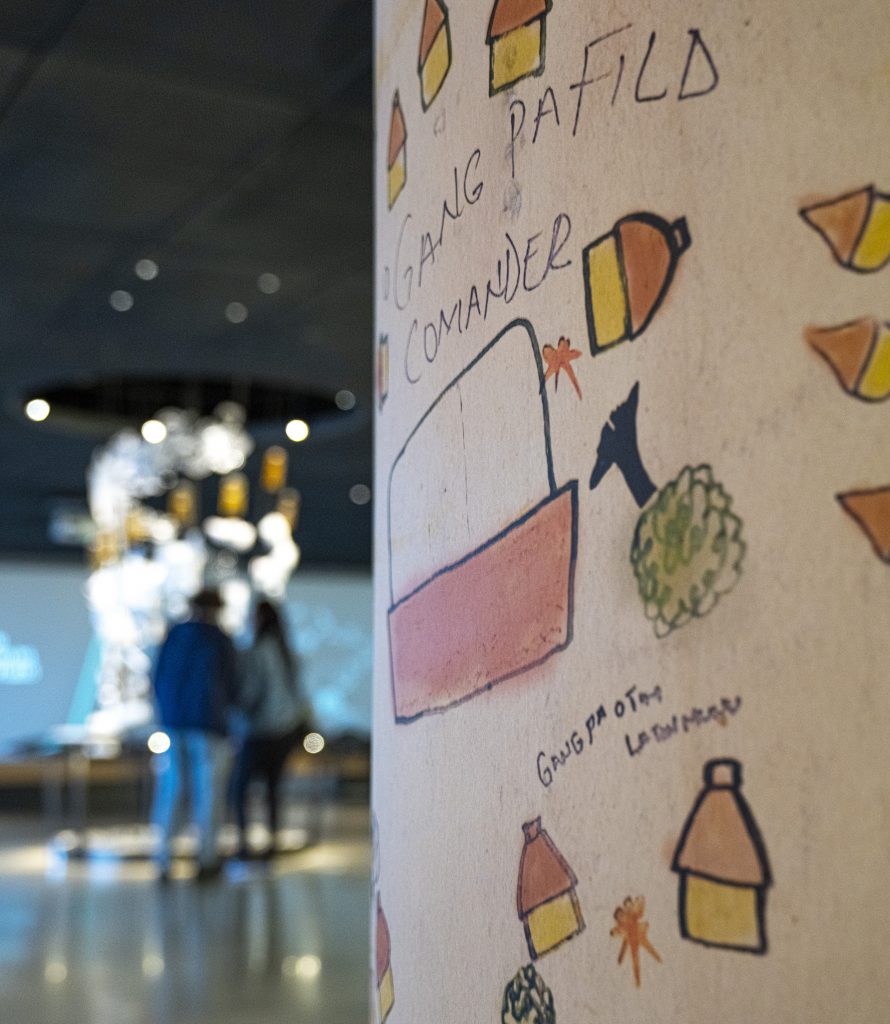 My life in captivity took an even more abrupt turn when I lost my daughter. While years have gone by since I last saw her, she is ever-present in my mind. She disappeared in a military strike against the LRA launched by the Ugandan government and a coalition of other countries after mediation efforts broke down in 2004. To this day, I still don’t know where she is, whether or not she is alive. I wrote my memoir in the hope that it would help me find her. As I was writing, I thought that somebody might read my book and know what happened to her, know where she is and contact me. I wanted the world to know the pain that parents feel when their children are taken away from them. Writing was a means to both express that pain and to contain it. I have shared my experience in interviews many times since the publication of the book. I have gained confidence and ease in expressing myself. But the pain of talking about the disappearance of my daughter hasn’t lessened. It is something that I can put in writing, but it remains difficult to say. This is something that is there, in both my memories and memoir, that I did not want to include in the exhibit.

What I did want to include in the exhibit is the ongoing impacts of the violence that we experienced during captivity. Many women injured and violated in conflicts have reproductive health problems. Women faced forced marriage and pregnancies. They gave birth in captivity and faced many other things that remain difficult and painful. I want the world to know that. 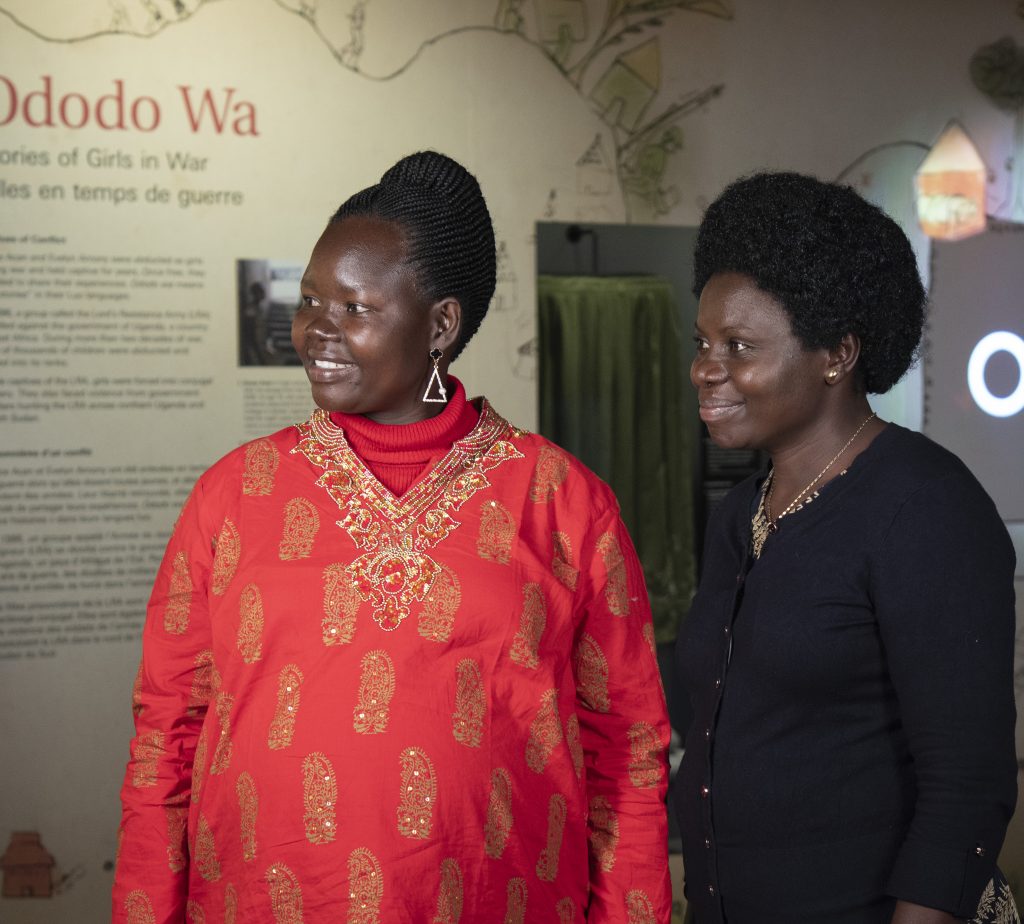 I also want the world to know the fear that we experienced. We lived in constant fear and had no one to turn to. I felt alone and desperate.

I have come to realize the value of talking about what happened. Sharing my experiences, even the most painful ones, make me feel better, relieved. Sometimes, it makes me feel free. Before I wrote my book, I was afraid that people would say: “Oh, she is useless. She was raped. She has nothing.” But after going through the process of writing about my experiences, I felt the courage to speak out publicly. It made me realize that I have courage. I have not yet gone back to school, as I had hoped to do, but it is still one of my goals. I can still change my life, still move on. I do move on. I am a researcher, a mother, an activist.

In my work as a researcher and activist, I have been working on a project that also involves men who have returned from LRA captivity. They also face challenges. Those who were commanders sometimes feel the desire to reunite with the children that they fathered in captivity. They find that there’s difficulty in contacting the family. Some have expressed being met with words of rejection: “No, you were the one who wasted our child’s time. You don’t have any rights here.” They are afraid, but feel that they should get in touch with their children.

Many of these men have returned with physical injuries, some with amputated legs, and have no means of livelihood. Some have been denied land by their family. They are told: “No, you were in the bush for too long. Your family land has been taken away.” Returnees often lack voice and grounds to make claims to land. Some men were also sexually assaulted during the war. They are scared to come forward and talk about what is affecting them.

Truth telling is very much key. I feel that the government failed to protect us.

There is a saying in my culture that inspires me in our continued advocacy for justice and reparations: “When a tree is cut down, it can still grow fresh leaves, like a newly planted tree and continue to grow.”

In 2014, the Women’s Advocacy Network presented a petition to the Ugandan parliament asking for our specific issues to be addressed, including rebuilding our lives, paying for our children to go to school, and providing medical care. Our demands have yet to be answered.

Evelyn Amony is the Chairperson of the Women’s Advocacy Network based in Gulu, Uganda. She is an author, researcher and activist.