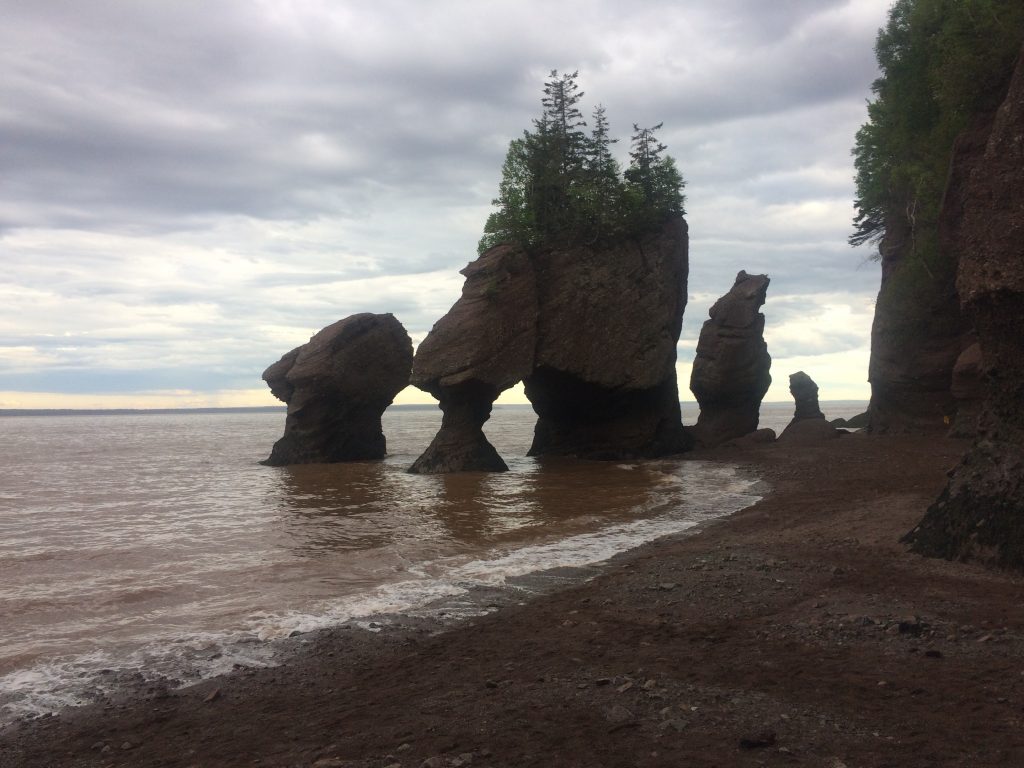 Once upon a time, I did my research in the archives, a controlled environment where weird things rarely happened. Then, I became a public historian, venturing out into the real world, and things were not always so straightforward, particularly when I was on the road with a film crew. For instance, there was the time when the director was convinced that he had lost an expensive camera, which would have destroyed my budget. We subsequently discovered that the camera had only been misplaced. Overly excited by the good news, I decided that I could race the van carrying the equipment over a short distance, not accounting for the large curb that was in my way, which resulted in my falling face first into the pavement. A tooth was cracked, but mostly my ego was injured.

That story had a beginning, middle, and end, but the one that follows — also about a missing camera — remains a mystery. It began when I set off during the summer of 2018 with a filmmaker and his cameraman to work on a documentary dealing with the environmental history of the marshlands at the head of the Bay of Fundy in New Brunswick and Nova Scotia. For nearly three centuries, various human interventions tried to control the bay’s tides, the largest in the world, so that marshes could be drained to allow farming to take place. We travelled across the region, interviewing a wide range of people connected with the landscape and capturing images that documented the human impact on this environment. Our efforts resulted in the production of Unnatural Landscapes, but the film makes no reference to the mystery.

It began one afternoon when we were filming near a dam in southeastern New Brunswick that had been built in the early 1950s to prevent tides from going upstream. The scene of the crime, if there was a crime, is pictured below. The site appeared to be bucolic, leading the filmmaker to make a decision that made perfect sense at the moment. Eager to maximize what we could do in limited time, he had had the foresight to bring two cameras, one that we would use for most purposes, but another special one that was equipped to shoot time-lapse images so that we could show the rapid rising and falling of the tides. In order to use them both simultaneously, the filmmaker decided to set up the smaller, time-lapse camera in what appeared to be a secluded location. There was a single house across a small road from our site, located along the river and hidden from view by a large mound. No one was around, we thought, so what could possibly go wrong? 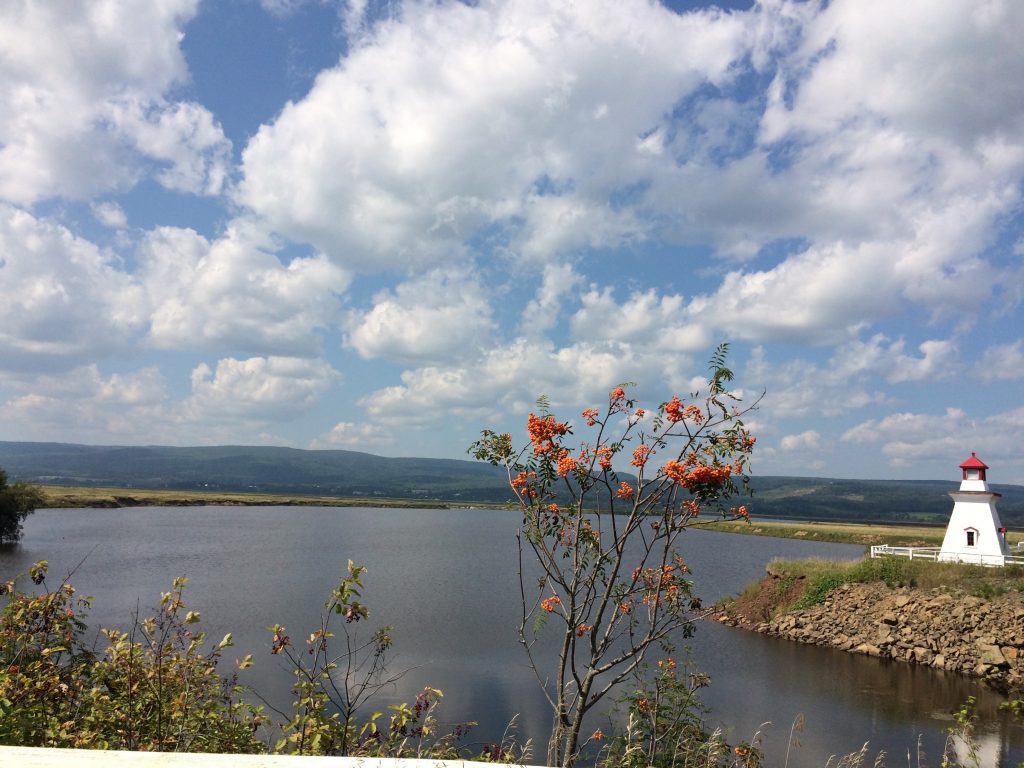 The scene of the crime. Author’s photo.

We left the camera unattended for maybe thirty minutes, but when we returned it was gone. There was no one around to ask if they had seen anything suspicious, and it all seemed pretty hopeless until a woman in a rickety red sedan approached us, and asked if we were missing a camera and a tripod. We were thrilled to hear these words, but then it got weird. First, she — let’s call her Margaret — wanted to know the model of the camera, presumably so that we could be distinguished from all the other people who had left cameras that day at that location. Having passed her test, she then returned the camera, which she said she had taken to protect it from someone with more sinister intentions.

Margaret went on to tell us how this outwardly innocent setting was nothing of the sort. The house that overlooked our site had apparently been abandoned, and was now being occupied by squatters who were using it to deal drugs; and the house next to hers — about 100 metres up the road from our site — had recently mysteriously burned down when its occupant went to live in a nursing home. She seemed a bit nervous as she told us these stories, clutching her lighter for dear life as she spoke. But we didn’t think much about this at the time, and the director — who always had bottles of wine stashed away — provided her with one as a gesture of our appreciation, a finder’s fee of sorts.

This warm and fuzzy feeling passed pretty quickly as it occurred to us that her story was odd. If she was really trying to save the camera for us from the bad guys, wouldn’t it have been better to leave a note? Otherwise, if we hadn’t run into her, then the camera would have been hers. And how did she even come into possession of the camera since no one could see it from the road, and she gave no indication that she had been out walking behind the mound that hid it from view.

This is where her son entered the picture. After returning the camera, she kept talking (and talking), ultimately explaining that she had already heard about us from her son, who — she says — had noticed us the previous day at Hopewell Rocks. A nearby tourist attraction no more than fifteen minutes away, it is best known for the rock formations near the shore, carved away by the tides, some of which resemble flower pots.

As it turns out, we had been filming the rising tides at the Rocks the night before, after the park that housed them had been officially closed. This explains why the image above is so dark. There was only one other car in the parking lot, which contained a guy and his girlfriend. So we figured that this was Margaret’s son, who probably would have taken note of the fact that the other car was a white Audi, a particularly conspicuous car in a region that does not usually see such vehicles. (I can’t possibly explain why I was provided with an Audi from the rental car agency at the Moncton airport. The car was a frequent source of embarrassment as interviewees commented on our apparent wealth; and then there was the challenge of scrubbing marsh mud off the interior of the white Audi. But I digress.)

But if our car had attracted the attention of the son, how did his mother know about it the next day, unless her son had already seen us, perhaps setting up our camera? Is it really likely that her son thought we were so interesting that he would have talked to her about our car, without any connection to the camera? In any event, the son’s involvement provided the opportunity for endless speculation, the cameraman theorizing that the son had actually taken the camera, without his mother’s knowledge. In this version of the story, she was not exactly the Good Samaritan protecting the camera. Remember that Margaret was very much aware of the model number when we first met her, and so we started to imagine that when she saw what he had done (and after taking note of the model — and the fact that it was fairly old and had little market value) she decided that it was better to try to return it than to keep stolen goods that belonged to the mysterious strangers.

In the days that followed, as we continued our shoot, I asked people from the region what they thought about the story. Everyone I talked to was quick to point out that we had been crazy for having left the camera. Fair enough. I plead guilty to believing that New Brunswick is heaven on earth (a fact supported by its general avoidance of large-scale infection by COVID-19). That said, some thought that Margaret was just being neighbourly, in her odd way, by trying to protect the camera. Still others, who were prepared to listen to my conspiratorial theories involving the son and his preoccupation with the three guys in the white Audi, were drawn in to my dark musings. Readers are encouraged to speculate further.

Ronald Rudin is professor emeritus in the Department of History at Concordia University.