We lost a towering, deeply rooted presence recently. His name was Gary Potts. He gave much to his Teme-Agama Anishinaabe – Temagami First Nation community, the Temagami region, this country called Canada and anyone whose path he crossed.

Temagami is located about 100 kilometers north of North Bay. It’s a storied region chronicled by newcomers such as Archie Belaney aka Grey Owl and the poet Archibald Lampman. It has also been site to one of the great dramas and test cases for Indigenous rights and environmental protection in modern Canada. Many of the Teme-Agama Anishinaabe reside on Bear Island on Lake Temagami which is where Gary Potts died in his home surrounded by his family on June 3, 2020. 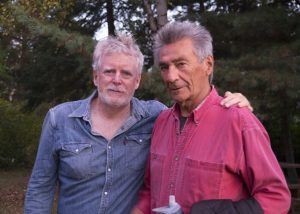 I was blessed to know him for 40 years. A relationship that began because of his political leadership and my work as a journalist and filmmaker blossomed into a deep friendship that endured long after our professional paths intersected.

Gary Potts was a self-described bushman. He was an adept hunter, fisher and trapper. He was also a miner for a period of time. He was a working man.

In the prime of his adult life, he dedicated himself to his people’s struggle for justice in their traditional lands Ndaki Menan, known to many as the Temagami region. Potts’ battle as chief of the Teme-Agama Anishinaabe took him to the highest courts of Canada, constitutional talks with prime ministers and premiers and to a blockade on the Red Squirrel Road over the logging of old growth forests where he was arrested. Potts’ resistance in Temagami, influential role with the Assembly of First Nations, and charismatic leadership style brought him to national attention. He received an honorary Doctor of Laws degree from Trent University in 1991.

Ultimately, the Teme-Agama Anishinaabe lost their case in a narrow legal sense before the Supreme Court of Canada in 1991. Thirty years later, the political and social outcome has yet to be decided. There is still no settlement of the government claim to the Temagami region. I choose those words deliberately. The government of Ontario sued the Tema Augama Anishinaabe to lift a legal caution on development of so-called crown lands in Temagami that had been ingeniously launched by a legal and research team under Potts’ supervision in the 1970s. Hence it is a government claim, not an Aboriginal one.

Gary Potts’s legacy is large. As Teme-Agama member Mary Laronde expressed on CBC Radio, the impact he had on the consciousness and pride of his people will endure. From an ambitious canoe building venture, to improved health services on Bear Island and with students attending many college and university programs, the resurgence of the Teme-Agama Anishinaabe is visible.

Potts had a commitment to environmental protection based on shared stewardship.  His vision was one of co-existence, not of partisan rivalry. In the 1990s, when it appeared that a comprehensive settlement to the jurisdictional and land title dispute was imminent, Potts and his colleagues represented the Teme-Agama Anishinaabe on the Wendaban Stewardhip Authority, a forward looking body comprised of Indigenous people, townspeople, tourism outfitters, industrial interests, canoeists, campers and cottagers that was to be a model for regional management. The potential deal and the Wendaban concept ended with the defeat of the Bob Rae NDP government in 1995.

However, Potts’ vision still has legs. A youthful cohort on Bear Island is determined to keep the flames burning culturally and politically.

I suggest that those of us who are left behind after the death of Gary Potts need to take the notion of reconciliation with Indigenous peoples seriously. What will social justice look like in Ndaki Menan? How can the Teme-Agama Anishinaabe enjoy legitimate influence over matters in their traditional lands? What actions and sacrifices are those of us who are newcomers to these lands prepared to undertake to make that happen? An answer based on respect for the human rights of the Teme-Agama Anishinaabe and our natural world would honour my late friend Gary Potts.

James Cullingham is an Adjunct Graduate Faculty Member Canadian Studies and Indigenous Studies at Trent University and President of Tamarack Productions. He lives in Nogojiwanong (Peterborough ON)

One thought on “Gary Potts – a tribute”