On June 25, 2020 Justin Trudeau announced the creation of Canada Student Service Grant, a program that encouraged young Canadians to volunteer in their communities while paying them up to $5000 to do so. Within days however, Trudeau’s feel good announcement began to turn sour as questions arose over the program’s links to the ME to WE charity, the NGO chosen to administer the program. Some of the controversy stemmed from stories about abusive behaviour by the Kielburger brothers who run it, while others have pointed to the “white saviour complex” and “voluntourism” that WE fosters in its approach to its work in the Global South. But the biggest part of the controversy stemmed from the intimate links between the charity and the Trudeau family, including his wife, Sophie, his mother, Margaret, and his brother, Alexandre. Though it turns out that the charity has fostered relationships across the political spectrum in Ottawa, somehow the controversy seems to have stuck to Trudeau and the Liberals.

Youth volunteer programs have a long Liberal history, particularly during the reign of Justin’s father Pierre in Ottawa in the 1960s and 1970s. Links between volunteer programs and Canadian governments got their start in in the early 1960s with the formation of Canada’s version of the American Peace Corps – Canadian University Service Overseas (CUSO). Though CUSO’s activities were largely ignored by the Conservative government of John Diefenbaker, they captured the attention of the Liberals when they returned to office. Minister of External Affairs Paul Martin, in particular, found ways to support its work and volunteers, including using the airlift functions of the Canadian Forces to deliver CUSO volunteers to their destination projects. The founders of CUSO, such as Dr Francis Leddy had strong links to the Liberal Party, as did the first president of the Canadian International Development Agency (CIDA), Maurice Strong. During Strong’s leadership at CIDA he hired CUSO founder Lewis Perinbam to develop the agency’s NGO Division, which provided matching grants to help fund community development work overseas. 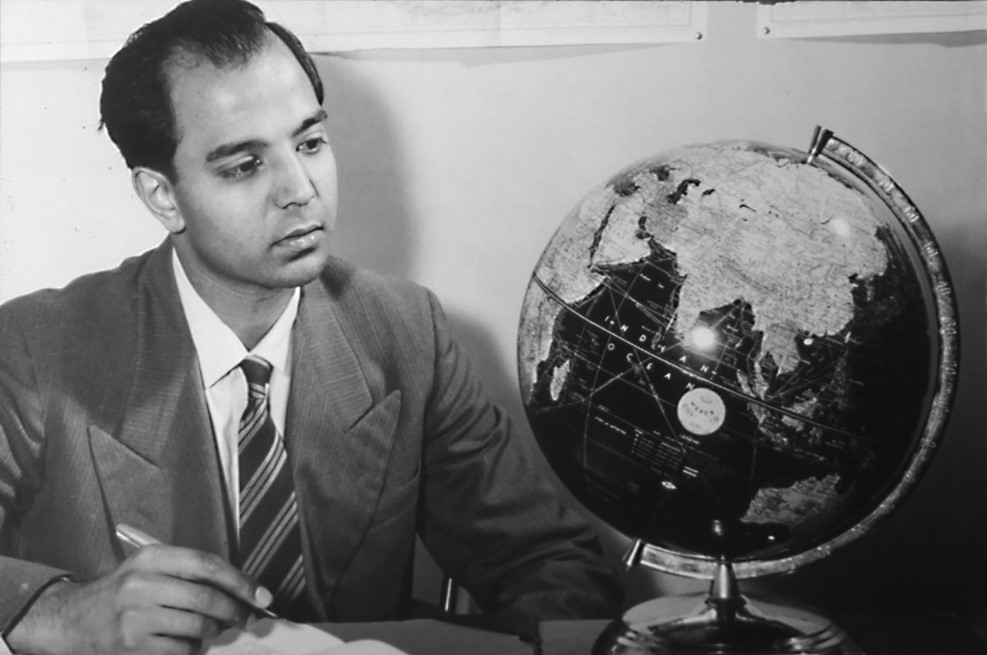 The most infamous link between the Liberals and youth volunteerism was the creation of the Company of Young Canadians in 1965. The Company was to be the domestic arm of CUSO and its volunteers the foot soldiers in Canada’s “War on Poverty,” promising the maximum feasible participation of the poor and disenfranchised in the battle in the process. Despite the radical rhetoric, Prime Minster Lester Pearson envisaged that its young idealistic volunteers would work with existing charities not to challenge the system, but to “supplement and increase their effectiveness.” Pearson’s rather mundane conception of the Company was most evident when he claimed CYC volunteers would be popularly known as “Eager Beavers.” 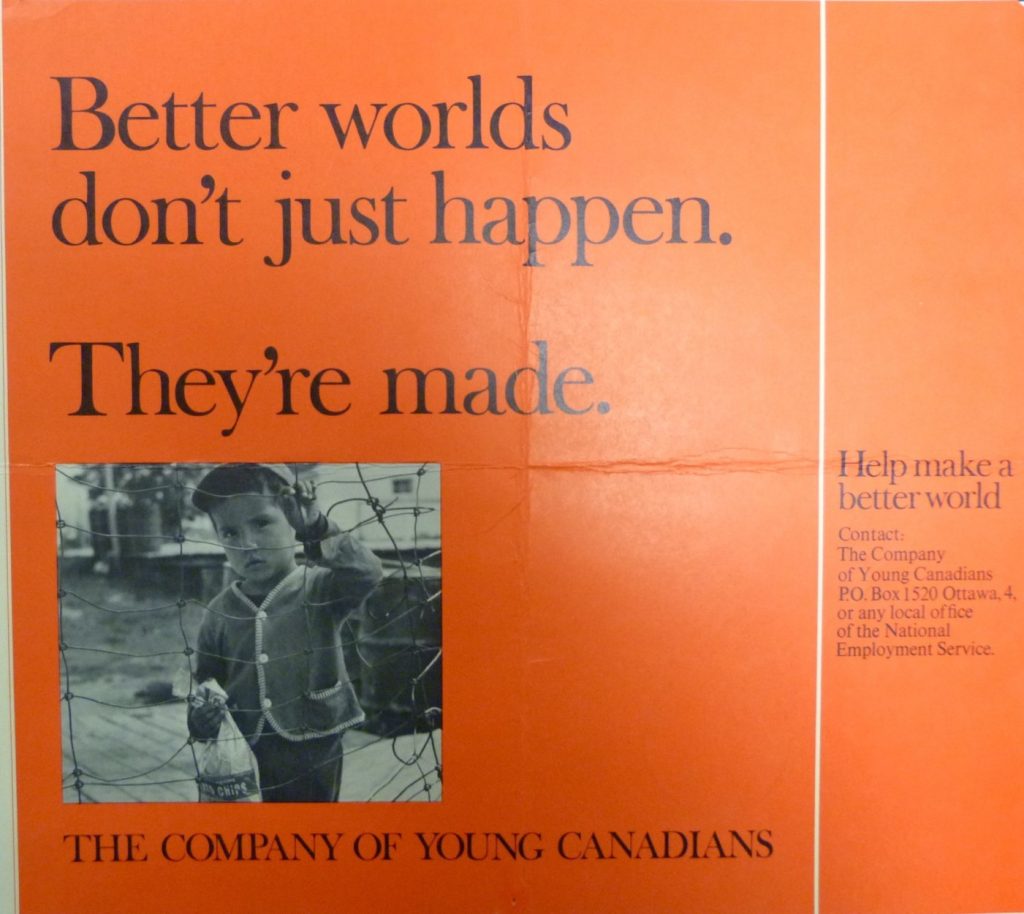 Most young Canadians interested in fighting poverty, however, were not interested in joining a Liberal “do-gooder” organization peddling “band aid” solutions to the poor and disenfranchised. By the fall of 1966 when CYC volunteers first entered their placements the Company’s governing council had maneuvered it from a social service to a social action ethos. Instead of “Eager Beavers” Canadians got “shit disturbers” who led protests among hippies in Toronto, Victoria, and Vancouver, with African Canadians in Halifax and with Indigenous peoples in Northern Alberta and the Northwest Territories. If that were not enough allegations soon arose that Company projects in Quebec were funnelling money to Quebec separatists, including the FLQ, to foment revolution on the streets of Montreal. The latter allegations led to a full scale Parliamentary enquiry and the loss of volunteer control over its activities in 1970. Nonetheless, the Company and its volunteers remained a thorn in the side of the established order helping to launch the Dene Nation, Greenpeace, and the Parti Acadien among others over the next half decade.

Surprisingly, the controversy raised by separatists and free-wheeling bearded radicals (women constituted 30% of CYC volunteers) did not dissuade the Trudeau government from the field of youth social activism. Instead, it upped the ante by initiating the Opportunities for Youth program in 1971. Ostensibly, a summer employment program for students, OFY challenged youth to create their own work. Ironically, it was also created and staffed by former CYC volunteers. Applications stressed that the program preferred “unique approaches to the provision of community services.” Trudeau Sr.’s principal Secretary Jim Coutts later claimed, “Citizens were not on the dole; they were helping to change society.”[1] OFY and the raft of other alphabet soup “citizen participation” programs (CYC, LIP…) developed some of the first co-operative day cares centres, community legal and health clinics, women’s crisis shelters, as well as environmental and recycling projects. Like the CYC however, OFY also generated controversy when the media discovered that it had funded a marijuana grow-ops and community newspapers saturated with profanity and “pornography.” RCMP security checks also led to a number of project cancellations before they saw the light of day. 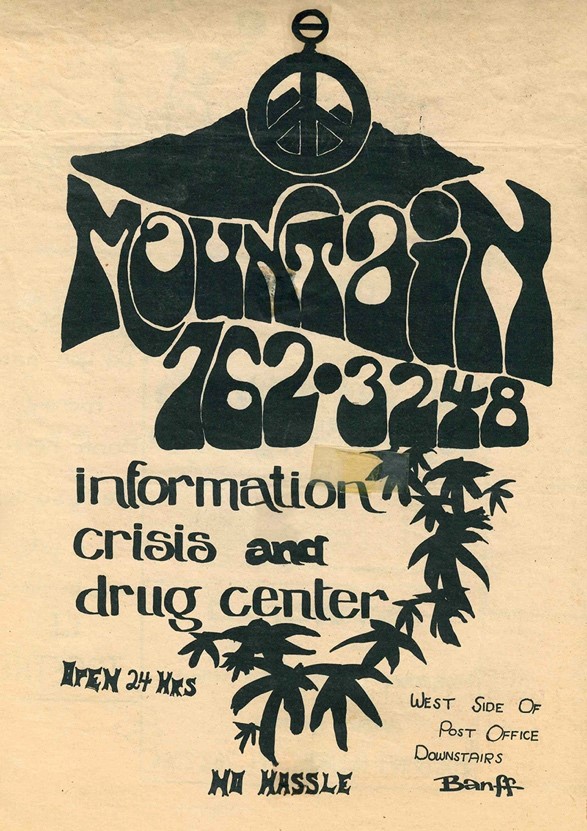 Poster for Banff Drug and Crisis Centre established with OFY funds in 1971 when young people were tramping across the country. Distress Centre Calgary.

Like the CYC that proceeded it, OFY became part of the great expansion of citizen participation programs funding through the Citizenship Branch of the Department of the Secretary of State, led by its not so young. but very “hip” Minister, Gerard Pelletier. The Citizenship Branch in particular was staffed with young people clad in jeans and called themselves “guerilla bureaucrats.” [2] Though hailed as splendid instrument[s] of social animation these programs rarely followed Treasury Board regulations. Indeed, one OFY program officer told a group of students that it employed young middle class radicals at “exorbitant salaries to give money to more young middle class radicals for projects,” because “the type of people who will come up with new project ideas and can phrase their applications in a way which will appeal to OFY staff are the middle class youth who are well schooled and have experience in this type of rhetoric.” Despite his cancellation of OFY and CYC in the 1976 austerity budget, Trudeau claimed that they were among the programs of which he was most proud 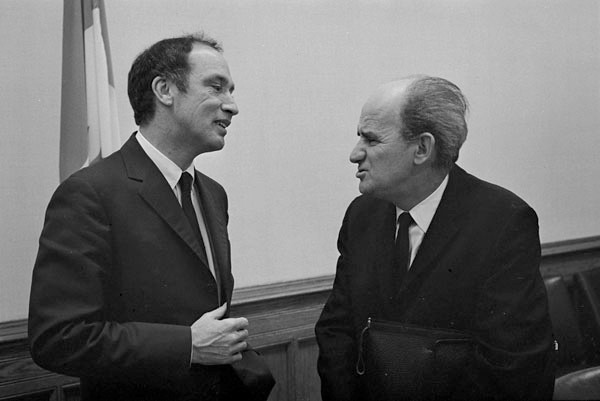 Hoping to finally get lucky on its third try, the Liberals created the Katimavik in 1977. The program was designed by Trudeau’s old travel companion Jacques Hebert and his Minister of Defence Barney Danson. Danson wanted a youth service organization that offered the opportunities he experienced as a young soldier – travel, discipline, service, bilingualism – but of course, he later added, “without the casualties.” Hebert who had started an international NGO Canada World Youth in 1971 with similar goals, balked at the military elements of the program. Eventually, Katimavik became a nine-month service program in which carefully selected volunteers served at least one term in a community from the other linguistic background, as well as one in a military environment. Volunteers were paid a dollar a day for pocket money and received a $1000 stiped to be used for their future education. In creating Katimavik, Barney was adamant that he wanted to avoid the bureaucracies that had produced the other “free-wheeling flops and the political fallout they generated.” As he remembered in his memoirs “other youth programs had ended in ‘hippie’ disasters.  I wanted no part of that.” (171-72). 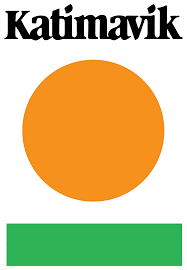 Soon Katimavik was sending hundreds of volunteers across the country and was hailed world-wide as a successful model of youth volunteer programing.  Nonetheless it was a Liberal program, and in 1986 the Progressive Conservative government of Brain Mulroney decided to place the program on the list of government cutbacks. By that time Hebert was a Senator and he used his public position to go on a very public three week hunger strike in the Senate Hall to force the government to restore at least limited funding. The Chretien Liberal government revived its budget and programming in 1994, only to see it chopped again in 2012 by another Conservative government under Stephen Harper. The latter cuts were opposed as “driven by ideology” by none other than Justin Trudeau who served as the program’s director between 2002 and 2006.

Youth, social justice, and the Liberal Party thus have a long history dating back to the party’s rejuvenation in the early 1960s. Ever since, Liberals have been concerned with creating youth programs to help them swim with the demographic tide. Of course much of this concern for capturing the youth vote, particularly the politically and social active ones, dates to Trudeaumania and its promises of the Just Society. Like his father Pierre, Justin has been hailed as liberalism’s saviour; the leader who could bridge “generation gaps” and “credibility gaps” to diminish the growing ranks of the politically alienated, particularly among the young. Now as then, many worry that Liberal outreach programs to socially active youth are nothing more than the politics of co-optation and feel good branding, rather than a serious commitment to social change. Others, particularly Conservatives, have also worried that such programs only further foster the intimate links between the NGO/charity sector and federal civil service, which many believe has not just a small l but a big L liberal bias. While both these allegations contain more fiction than fact, the current controversy of employing WE to deliver the Canada Youth Service Grant has turned what should have been an easy political score for the current Liberal government into a full-blown questioning of the Prime Minister’s leadership.  But then again, we have been here before.

Dr. Kevin Brushett is an Associate Professor and Chair of the History Department of the Royal Military College of Canada where he teaches Canadian and American social, political and diplomatic history.  He is currently finishing a full length history of the Company of Young Canadians to be published with McGill-Queen’s University Press.

Ian Hamilton, The Children’s Crusade: The Story of the Company of Young Canadians. Peter Martin, 1970.

Leslie Pal, Interests of state: The politics of language, multiculturalism, and feminism in Canada. McGill-Queen’s Press-MQUP, 1993.