With rising awareness and concern about police violence against people of colour in Canada and the United States, and following several recent instances of Royal Canadian Mounted Police (RCMP) violence against Indigenous persons — including the killing Rodney Levi of the Metepenagiag First Nation in New Brunswick, the RCMP attack on Chief Adam Allan of the Athabasca Chipewyan First Nation in Alberta, and an RCMP officer using the door of a truck to run down an Inuit man in Kinngait, Nunavut, not to mention the continued presence of RCMP on Wet’suwet’en land amid pipeline protests and the militarized raids on multiple camps therein earlier this year —  some Canadians are questioning the role of the RCMP and its relationship with Indigenous communities.[1]

For many Canadians, this pattern of RCMP violence is surprising and, though increasingly evident as protests about police aggression draw our attention to the systematic oppression that underlies these encounters, this image does not fit with the Mountie’s national image.

At first glance, the RCMP appear as red-coated peacekeepers with broad brimmed hats. It is an image that is hugely influenced by popular media. From U.S. classics, such as Dudley Do-Right, to Canadian television shows, like Due South and Murdoch Mysteries, a specific image of policing—and the Mounties, in particular — serve as a character type in our national psyche. 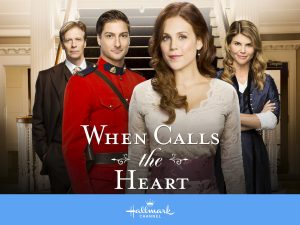 These are not the most recent offenders, however. That title goes to the hit CBC and Hallmark Channel program When Calls the Heart, which just wrapped its 7th season on April 26, 2020.

The early seasons of the show, set in the 1910s, centre around a romance between Elizabeth Thatcher, a teacher from the big city (Hamilton, ON) who chases new adventures in a small mining town in the west, and Jack Thornton, a Royal North-West Mounted Police (NWMP, later RCMP) constable who is also new in town. While Elizabeth embarks upon storylines leading her to new revelations of self-discovery, often upon reflection after helping a struggling friend or neighbour, Jack investigates minor crimes or chases outlaws who stir up trouble in their quaint frontier town. The show is, taken as a whole, cute in its neat single-episode story arcs and shamelessly romantic presentation of life on the western frontier of Euro-Canadian colonisation.

There is, however, a major problem in the way the show represents the RCMP’s purpose.

Because the show does not include Indigenous characters or storylines involving conflict with Indigenous communities, it effectively erases Indigenous peoples from the Canadian frontier landscape and sanitises the show of the violence implicit in the process of colonisation.

The polite way to describe the NWMP’s objective when they were formed in 1873 was, as stated by the RCMP Heritage Centre: “to establish friendly relations with the First Nations, enforce Canadian authority, pave the way for settlers, and maintain law and order on the western frontier.”[2] The impolite reality, as Sean Carleton writes, is that the RCMP have always been “used by governments in Canada to suppress Indigenous resistance and clear the way for continued capitalist accumulation by colonial dispossession.”[3] From their founding, the RCMP have served to monitor and subjugate Indigenous communities.

As recorded in the Truth and Reconciliation Commission’s (TRC) report on the impacts and legacies of the Indian Residential School system, in order to impose “order” on the prairies, “the [North-West Mounted] police were empowered to administer British and Canadian laws — laws that had been neither made nor approved by people who lived in the North-West.”[4]

They participated in the military suppression of the Métis resistance in 1885 and enforced the Pass System, implemented in 1885 (though never made law) that was practiced in certain regions of Canada for 60 years and sought to keep First Nations people separate from settlers by requiring First Nations persons to obtain a special travel permit from an Indian Agent in order to leave their reserve.

The RCMP also enforced the Indian Act, including by forcibly removing Indigenous children from their communities to attend residential schools or by returning escaped students to them. As shown in the TRC report, the Mounted Police were used by residential school principals and Indian agents both to threaten Indigenous parents to conform to colonial law and to impose it by force when required.

In 1914, for example, and as reported by the TRC, “Red Deer principal, J. F. Woodsworth, wrote letters to parents who had not sent their children back to school after the summer vacation that informed them that if the children were not returned within a week, ‘I shall send a policeman to bring them.’”[5]

Systemic racism within the RCMP was also a cornerstone issue for the National Inquiry into Missing and Murdered Indigenous Women and Girls (MMIWG), which sought to understand the disproportionately high rates of unsolved cases involving missing or murdered Indigenous women, girls, and 2SLGBTQQIA people in Canada.

Their report notes police failure to prevent “deaths of women in police custody” and to protect “from exploitation and trafficking, as well as from known killers.” The MMIWG report links this neglect to the RCMP’s historical interactions with Indigenous women — from the NWMP’s founding there was fear that some officers engaged in human trafficking of Indigenous women and at times had, consensual and non-consensual, relationships with them.[6]

Though these reports largely focus on events prior to or after the 1910s and 20s, When Calls the Heart’s setting was not a benign period for the RCMP. Just thirty kilometers away from Elizabeth’s hometown (Hamilton), the RCMP engaged in a notorious crackdown on Haudenosaunee autonomy at Six Nations on the Grand River. Following the First World War, the Haudenosaunee issued their own passports and Cayuga Chief Deskaheh (Levi General) began to travel throughout Europe building international recognition for Haudenosaunee sovereign-state status.

From 1922 until 1924, the RCMP actively sought to disrupt politics in the community. They raided community-member’s houses, built a detachment on the reserve, seized wampum belts, locked the Confederacy Council House, and forcibly handed control to a band council. Their goal was to void the authority of the Six Nations’ Confederacy Council and replace it with a band council as defined by the Indian Act.[7] Though this happened further eastward than the show’s western frontier setting, it is a good demonstration of the purposes for which the government felt the police were well suited.

The RCMP have consistently, throughout their history, used force and intimidation as necessary to push colonial agendas. The TRC’s report notes that “From the time of their arrival in the West, police were present at all the Treaty negotiations, serving as a silent reminder of Canada’s military potential.”[8] But these realities do not play to When Calls the Heart’s nostalgia for the Canadian frontier, which is predominately white and empty.

As we enter an era of increased awareness about the complicated and too frequently violent relationship between the RCMP and Indigenous communities, and after the announcement that When Calls the Heart has been renewed for an 8th season, we must ask ourselves if television programs that glorify the RCMP and misconstrue the past for millions of viewers should continue to be indulged.

Ignorance kills. Shows that actively misrepresent the RCMP’s original purpose in the Canadian west obscure the deep roots of our modern system of police oppression. Can we continue to abide shows that coax settlers (like myself) into feeling comfortable with our heritage or has the moment presented itself for Canadians to reject this white utopianism?

Erin Isaac (MA) is a recent graduate from the University of New Brunswick and will be pursuing a PhD in History at Western University this fall. Her research considers intersections of race, religion, and disaster.

One thought on “Missing Pieces: The Romanticisation of the RCMP in CBC’s “When Calls the Heart””