Earlier this month, the Graphic History Collective released Remember/Resist/Redraw #25. The poster looks at the Ontario Coalition Against Poverty’s successful 2009 struggle to increase access to the Special Diet benefit, an additional $250 for those living on social assistance to purchase food. With art by Rocky Dobey and an essay by John Clarke, the poster highlights the power of poor and racialized people using direct action to fight austerity and food insecurity in Canada’s biggest city.

“We won’t be quiet until we get the Special Diet!”

In December 2009, more than one hundred and fifty people, overwhelmingly Somali women, participated in a day-long Ontario Coalition Against Poverty (OCAP) occupation of the head offices of Toronto Social Services. “We won’t be quiet till we get the Special Diet!” was the chant that rang out over and over again. It was one of many actions that were organized in a range of Ontario communities during the course of a five-year campaign to increase access to the Special Diet benefit—an additional $250 for people living on social assistance. The drive to ensure that as many individuals and families as possible received this additional income was rooted in efforts to resist the driving down of social benefits going back to the mid-1990s. The campaign demonstrates the power of using a diversity of tactics and strategies, big and small, to organize and defeat austerity politics that harm the poor.

In 1995, the Progressive Conservative government of Mike Harris cut social assistance rates in Ontario by 21.6 per cent and froze them for the rest of its time in office. They did this as part of a broader agenda of austerity that provided tax breaks to the rich, while attacking workers’ rights, gutting social programs, and carrying out a war on the poor. When the Liberals returned to power in 2003, they only provided social assistance increases below the rate of inflation. By 2005, the buying power of those on assistance had fallen to the point where paying the rent and eating a nutritious diet was simply impossible. At this point, OCAP—a poor people’s organization with a history of challenging austerity and mobilizing communities under attack—became aware of the Special Diet and recognized how it might be used to fight back. It was an obscure benefit to which few had access. To obtain it, a health provider had to fill in a form saying that particular dietary items were required. Those who found out about the benefit would frequently be denied even with a properly filled out form. OCAP sought to change that.

At an OCAP planning meeting, an outline for a campaign around the Special Diet took shape. Our idea was to spread knowledge of the benefit far and wide, to directly assist people by holding “hunger clinics,” in which health provider allies would fill in the forms, and, finally, to use direct action methods on a wide scale to ensure those who applied were not turned away empty-handed by the welfare bureaucracy.

The clinics began almost immediately, and thousands of people had forms filled in at them. Outside of Toronto, people took similar action. The number of Special Diet applications dramatically increased. In response, state officials tried to deny applications, but we were ready for that. We made clear to all who attended the clinics that applications would likely be rejected and that people had to be ready to fight for this benefit. We began to respond to denials with actions at social assistance offices, the social services head office, and even the Mayor’s office and the Ontario social services minister’s office. When we took action, we brought dozens of people whose claims had been rejected to pressure the bureaucracy to provide the Special Diet.

The guardians of the system looked for ways to stop us, but we persevered. We beat back an attempt to ensure that only doctors, rather than other health providers, could fill in the forms in Toronto. A change in the forms requiring providers to name specific health conditions as the basis for requiring the benefit proved to be a problem, but our allies organized into a group called Health Providers Against Poverty and held firm. One Toronto doctor, Roland Wong, filled in a large number of forms and refused to back down, even in the face of threats of disciplinary action.

From 2005 to 2010, the campaign continued with the Somali community always playing the leading role in mobilizing and resisting. The government eventually imposed conditions on the application process that made our clinics impossible, but to this day the benefit is being provided much more frequently than when we began the campaign. Due to this struggle, the Special Diet went from a benefit providing $6 million a year to one paying $200 million, with some 160,000 people receiving it. The Special Diet Campaign was a model of collective action by poor people that challenged the austerity agenda and provided lessons in organizing that we can use in the struggles ahead. 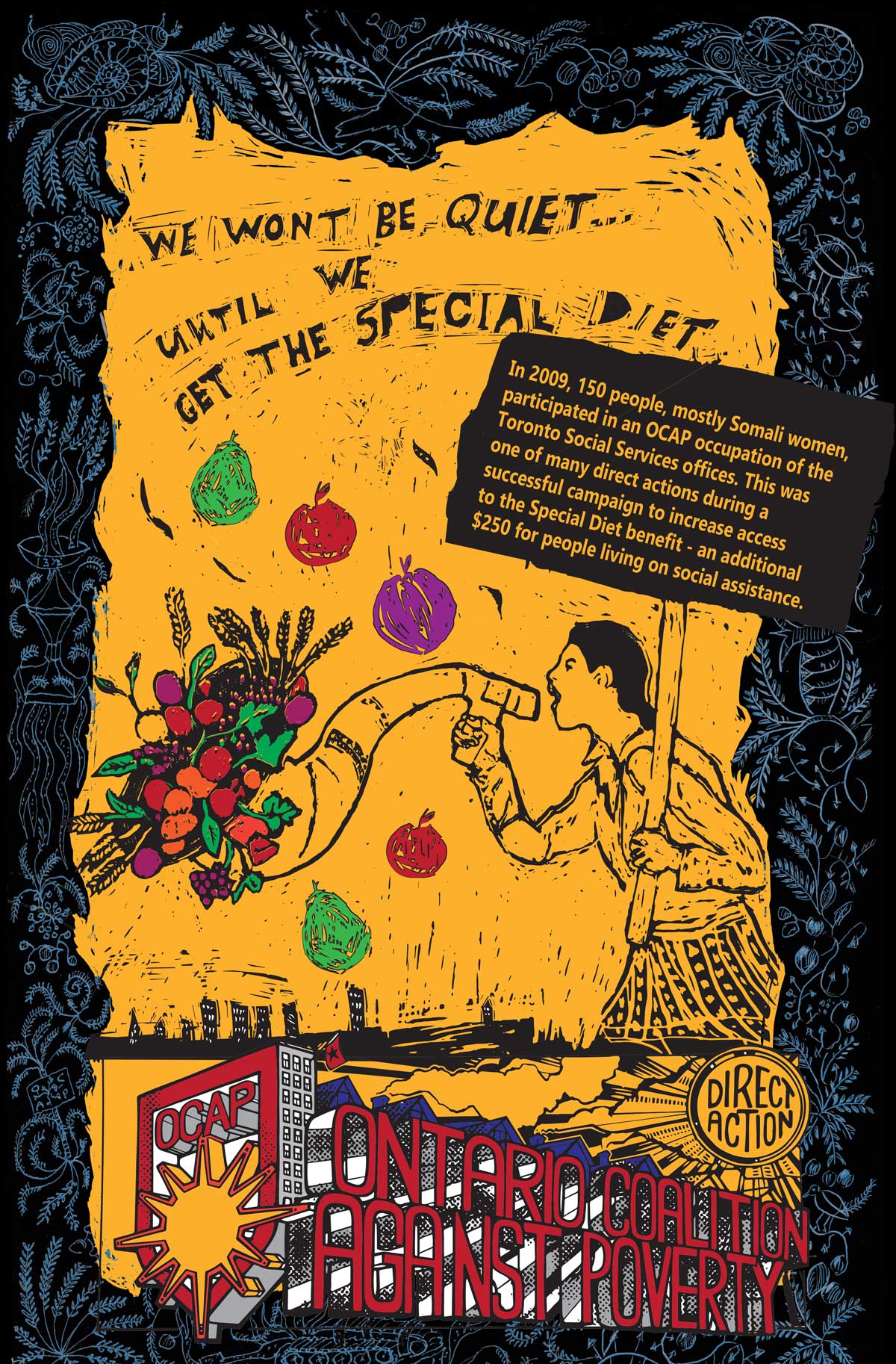 [Image Description:“The poster depicts a woman holding a horn of plenty in one hand full of fruits and vegetables. In the other hand, she holds a sign that says: In 2009, 150 people, mostly Somali women, participated in an OCAP occupation of the Toronto Social Services offices. This was one of many direct actions during a successful campaign to increase access to the Special Diet benefit — an additional $250 for people living on social assistance. Along the top of the poster the title says “We Won’t be Quiet…Until We Get the Special Diet. On the bottom in a circle it says, “Direct Action” and the Ontario Coalition Against Poverty logo. Around the outside of the poster are blue decorative designs of plants on a black background ]

John Clarke became involved in anti-poverty struggles in the 1980s when he helped to form a union of unemployed workers in London, Ontario. In 1990, he moved to Toronto to become an organizer with the newly-formed Ontario Coalition Against Poverty. In January 2019, he stepped down as an organizer but remains an active member of OCAP. Twitter: @JohnOCAP.

As a young person in the 1970s, Rocky Dobey began installing work on the street, though he couldn’t fathom calling it art. As an anonymous street artist he bolted copper plaques and books to street poles and later started making posters and prints with different activist collectives (prison abolition, anti-globalization, anti-police state). He is most proud of the sculptures he has built with various Toronto communities, like the Drug-Users Memorial and the Lakeshore Psychiatric Hospital Memorial. Instagram: @rockyzenyk. Website: https://rockydobey.ca/.

“Can Ontario Works help pay for a special diet?” Steps to Justice: Your Guide to Law in Ontario. https://stepstojustice.ca/questions/income-assistance/can-ontario-works-help-pay-special-diet.