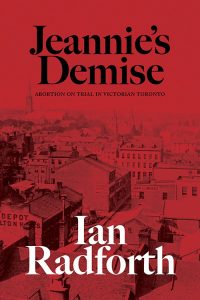 In this episode of the History Slam, I talk with Ian Radforth about his new book Jeannie’s Demise: Abortion on Trial in Victorian Toronto, which examines the murder trial following the 1875 death of Jeannie Gilmour, a young woman who had gone to Arthur and Alice Davis to have an abortion. We chat about crafting a narrative from the story, how the case was sensationalized by the press, and the Victorian idea of ‘Toronto the Good.’ We also talk about Arthur and Alice and how they advertised, Jeannie’s path to them, and how Jeannie’s story fits within the wider history of abortion in Canada.