America’s political history has been leading to the events at Capitol Hill on 6 January 2021 for a quite some time. The Cold War’s stifling impact on American politics directly shaped today’s troubling reality by slowly pushing progressive left voices from mainstream discourse. As a result, far-right critiques of the American nation-state which simultaneously avoid criticizing the country’s imperialistic foreign policy and lambast cosmopolitan elites, exemplified by McCarthyism, have been incubated by political actors for decades. A reality which is best exemplified by the personal and professional relationship Donald Trump shared with notorious lawyer and power broker Roy Cohn, who famously served as McCarthy’s chief counsel during the Army-McCarthy hearings.[1] 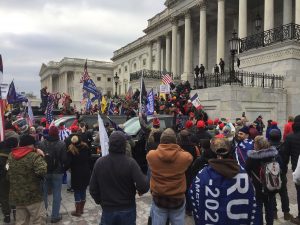 Trump supporters force their way into the Capitol Building while brandishing signs that would not have looked out place at anti-communist rallies during the height of the Cold War. (Wikimedia Commons)

The legacy of Cold War rhetoric has directly contributed to ensuring that right wing populism has remained one of the most prominent and accepted methods by which to criticize the American government’s compounding failures and slow decline from political hegemony. Trump capitalized on this in his 2016 campaign, and when he proclaimed to his supporters that they were going to march down Pennsylvania Avenue to Capitol Hill on the 6 January 2021.

It is well established that the Cold War stifled the development of progressive movements within the United States. This can best be seen by examining the Civil Rights Movement of the 1950s and 1960s. Works by Mary Dudziak and Thomas Borstelmann have already convincingly established that the Cold War narrowed the discursive range of civil rights activists in America. Existing in a world subsumed by anti-communist language, that labelled critics of American society as ‘subversive,’ civil rights activists were forced “to walk a fine line, making it clear that their reform efforts were meant to fill out the contours of American democracy, and not to challenge or undermine it.”[2]

Progressives that challenged western colonialism and its unequal distribution of capitalist gains were specifically silenced through the actions of the House Committee on Un-American Activities and the Loyalty Security Program. On a general basis however, the increasingly hostile public reception of left voices due to tensions with the Soviet Union also played an important role.[3] Any systemic criticisms being levelled against America’s unequal distribution of wealth could not be addressed, as doing so would undermine America’s ideological resistance to communism and socialism and would subsequently be viewed as disloyal and traitorous.

Attempts to limit the language of civil rights groups were a direct response to Third World critiques of American democracy, which challenged America’s claims to moral hegemony by pointing to racial segregation. The criticisms levelled by foreign nations, as argued by Dudziak, undermined the American image of a liberal and all-encompassing democracy, and challenged America’s leadership in the post war era. Fearing a loss of influence in the Third World, American officials were forced to engage with civil rights activists to re-forge America’s reputation on the international stage.[4] Despite the stifling context, room still existed for the Civil Rights Movement to exact meaningful change, but the scope of those changes was limited due to the narrow path of acceptable criticism that was left to civil rights advocates.

For example, prominent African Americans who praised America’s progress on issues of race in their travels abroad would find the US government amenable to facilitating their travel and international contacts through the State Department.[5] Critics such as Paul Robeson, known for his film and stage acting, on the other hand found themselves stripped of their passports and barred from international travel. In Robeson’s case, the State Department argued the travel ban had been put in place because his “frequent criticism of the treatment of blacks in the United States should not be aired in foreign countries… [as] It was a family affair.”[6]

Obviously, the growing disdain for progressive voices was not limited to the Civil Rights Movement. Despite the relatively short-lived political career of its namesake, McCarthyism made an impact on the contours of American political discourse both inside the halls of the Capitol Building and amongst the general public in the United States. Red-blooded American patriotism, a corollary effect of the anti-communism that swept the nation, was not just a product of propaganda campaigns. Rather, the reactionary anti-progressive dialogue that took root in American discourse relied upon local civic groups and organizations for its longevity.[7]

Growing increasingly concerned with the moral state of post-war America, both liberal and conservative Americans sought to re-establish the sense of civic unity they had felt during the Second World War.[8] Citing civic apathy, crime and juvenile delinquency, and the growing influence of ‘un-American ideologies,’ many Americans increasingly feared that a dedication to the common good had all but disappeared.[9] Thus, detailed pageantries and re-affirmations of loyalty and patriotism became common place. One of the most spectacular of these functions was the 1950 May Day Communist Takeover of Mosinee, Wisconsin.

Conceived of by members of the Wisconsin Legion, at 6 am on May Day 1950 actors, trailed by journalists from around the country, seized the Mayor of Mosinee with the help of “five gun-toting, arm banded ‘security police’” and declared the city had been taken over by the Council of People’s Commissars.[10] Over the next two days participants attempted to simulate life under Stalinist leadership in the small Wisconsin town. The dramatized events included the arrest of the community’s pastor, the execution of the local police chief, and the establishment of travel checkpoints where willing participants had their cars searched and “persons hassled.”[11]

Events of this size and complexity were rarely repeated. This was largely due to the growing prominence of television as a vehicle for bringing such spectacle directly into the home, and because of the growing political prominence of ‘professional’ anti-communists such as Joseph McCarthy.[12] Nevertheless, they were indicative of a grass root acceptance of American liberal capitalism as an unassailable truth of the nation’s political reality. Mosinee’s May Day, and the wide range of local and national events that bore similar messaging, such as the 1947 Freedom Train, formed an important foundation for political discourse during the Cold War. A context which treated criticisms of unequal capitalism or consumerism, and challenges to America’s ‘righteous’ brand of liberal democracy, with increasing hostility.

Radical voices still existed, and criticisms of American imperialism and foreign interventions still played a vital part in the Cold War’s historical narrative. In fact, despite everything I have argued, triumphalist understandings of America’s role in the Cold War, largely propagated by the Reagan administration, have failed to take hold upon the public’s memory of the conflict.

Nevertheless, as argued by Jon Wiener in his work How We Forgot the Cold War: A Historical Journey across America, triumphalist understandings of the Cold War shaped the historical memory of important political figures such as Dick Cheney, Ronald Rumsfeld, and George Bush Jr. Influenced by the rhetoric of the Cold War, these figures advocated for active displays of American power on the world stage and re-ignited a floundering narrative of American hegemony and strength.

The result has been on display over the past four years and most clearly visible in last week’s seizure of the Capitol Building. Convinced by the President’s aping of Cold War tropes, such as a refusal to accept defeat, an overuse of strong-man rhetoric, and unconditional patriotism, Trump’s supporters have been turned against the very institutions to which their rhetoric proclaims loyalty. This dissonance was on full display in the rallies that crowds attended before Capitol Hill was seized.

Speaking to a group of Trump supporters the day before the attack on Capitol Hill Pastor Ché Ahn questioned the State of California’s COVID restrictions by stating “I’m not in Communist North Korea, I’m not in Communist China, I’m in the United States of America! How dare they arrest people who want to worship god! It’s our first constitutional right.”[13] The pastor goes on to describe how he challenged the state’s restrictions in court and won a favorable ruling from the State of California’s Supreme Court, effectively praising the institutions of American democracy. Simultaneously he proclaimed the need to challenge the results of the 2020 presidential election, despite overwhelming judiciary support for the sanctity of the election.[14]

Trump’s own rhetoric has regularly mirrored these sentiments. Speaking in the lead-up to the November 2020 election, Trump asserted that his administration has always stood with the “righteous struggle for freedom” and with patriots who flee socialism to “find freedom.”[15] In the next breath the President asserted that his political opponent Joe Biden and the “radical left” were attempting to “impose the same system… socialism in America.”[16] All while Biden reminded voters that he “beat the socialist,” in the primary campaign and actively distanced himself from the progressive wing of his own party by reminding people to examine his career.[17]

Contradictions such as those contained in the words of Trump and his supporters are a result of the overwhelming hostility towards progressive voices which Cold War rhetoric baked into American political consciousness. This rhetoric has led the nation to a turning point where a discomfortingly large section of its population distrusts the results of an election based upon their distaste for the victor, who has been mischaracterized as a conspiratorial harbinger of American socialism.

In summation, Cold War rhetoric historically adopted by both parties, and the Republican party’s contemporaneous commitment to its use, has led to the disgraceful images we witnessed on 6 January 2021. Unfortunately, this rhetoric’s historical staying power has shown us that it is unlikely to fade away any time soon.

Andrew Sopko is a PhD Candidate in the Department of History at Queen’s University. His dissertation examines how the Municipality of Toronto and its citizens reacted to the prospect of nuclear annihilation during the Cold War, by focussing specifically on the development of the city’s civil defence program.

One thought on “This Isn’t Who We Are? Cold War Rhetoric and the Trump Riots”