Many Canadians watched with shock the attack on the United States Capitol on January 6. The mob’s besmirching of the halls of Congress was immediately recognized as a lesson in the dangers of conspiracy theories. Mixed among the alt right groups, militia members, and gun rights advocates who stormed the Capitol were many QAnon supporters who believe that the ‘deep state’ undermined the presidency of Donald Trump.

Canadians have had our own conspiracy theories, some of which continue to linger and affect our politics. One such theory is the idea that Ottawa secretly wishes to confiscate all privately held firearms, not just prohibit weapons deemed too dangerous for public use. This conspiracy theory has long roots.

In the late 1970s, for example, the National Firearms Association (NFA) responded to new gun control legislation by widely distributing a fake government memorandum ominously entitled “The Police Function in Canada as a Control and Enforcement Agency.” The NFA claimed that it had received the document from an anonymous source.

The memo urged that “the Public be discretely but effectively disarmed over a period of the forthcoming five years.” Authorities would disarm citizens gradually such that it “would not create alarm” and “nullify the credibility of alarmists and dissenters.”[1] One version of the memorandum was accompanied by a forged letter ostensibly signed by Ottawa police chief Thomas Welsh telling law enforcement to hold off disarming Canadians until after the next federal election.

At first glance, this ham-fisted effort to stoke gun owners’ fears is somewhat humorous. Non-believers often find conspiracy theories ridiculous. However, the alleged conspiracy found fertile ground in the late 1970s. MPs sent letters to the government asking about the document. Several newspapers reported the existence of the memo. One columnist said that the document was “obviously a statement of policy and blueprint for action by the police forces of Canada regarding the new firearms law” and that it “has to be terrifying for any firearms owner and extremely disturbing to anyone concerned with civil liberties in Canada.”[2]

Officials dismissed the document. Solicitor General Jean-Jacques Blais offered his “absolute and unqualified assurance” to the Ontario Federation of Anglers and Hunters that the document was a fake, and said he was “disturbed” that the NFA would circulate “such obviously false and misleading information.”[3] Minister Blais told the House of Commons that the “document is a phony” and that the “forced officialese” showed the author “consciously attempted to concoct a document in order to create an inflammatory situation.” 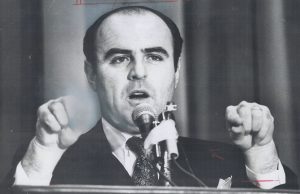 “Whoever perpetuated this fraud has to be out of their minds,” said Ottawa police chief Thomas Welsh. “It appears to be an organized attempt to discredit” the gun control legislation, “which in my opinion is reasonable legislation.”[4] 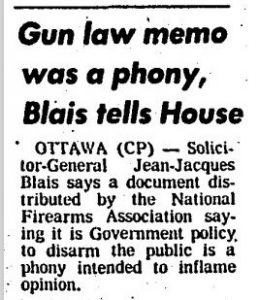 The internet and social media now allow conspiracy theories to be disseminated more widely and quickly. These tools also allow the leaders of some gun groups to hint that Ottawa wants to disarm Canadians.

Gun groups, for example, repeat the catchphrase ‘registration leads to confiscation’, thereby suggesting that any government effort to track guns is really a step towards banning weapons. The head of the Canadian Coalition for Firearm Rights recently referred to the “sustained effort to take privately held firearms away from Canadians for the past forty years.” The NFA sent a letter to Prime Minister Justin Trudeau in 2020 saying that “It is obvious now that your Liberal government has a goal of advancing civil disarmament in Canada.”

Such rhetoric risks fomenting violence. Corey Hurren, for example, crashed his truck through gates at Rideau Hall in the summer of 2020 armed with five firearms planning to arrest Prime Minister Trudeau in part to show his anger with Ottawa’s decision to ban some assault-style rifles on May 1, 2020.

Perhaps more importantly, this rhetoric also undermines the ability of the public to tackle divisive issues like gun control in a constructive way. This is an especially important lesson as Canada again embarks on a new debate about how to regulate firearms. Prime Minister Trudeau’s government introduced a gun control bill on February 16 that proposes to, among other things, allow for people to raise red flags about those with guns who pose a risk to themselves or others, and empower municipalities to regulate handguns.

These proposals should be debated for their possible efficacy and cost. Alleging that the bill reflects a secret desire to disarm all of Canada’s 2.3 million licensed hunters, target shooters, and gun collectors, however, is unhelpful.

R. Blake Brown is a Professor of History at Saint Mary’s University and the author of Arming and Disarming: A History of Gun Control in Canada (University of Toronto Press) Twitter: @RBlakeBrown