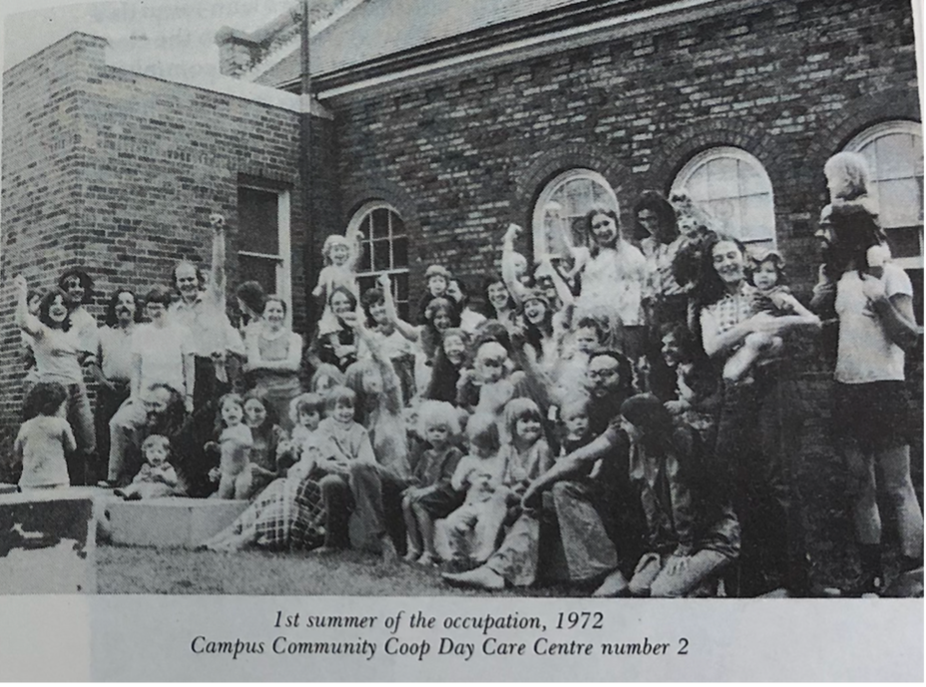 In 1969, a sub-group of the Women’s Liberation Movement in Toronto organized a day care co-op on the U of T campus, winning university support after occupying the second floor of Simcoe Hall. In 1972, a group of parents demanding another building to meet growing demand occupied the meteorological building for 10 months. UOttawa, Canadian Women’s Movement Archives Collection.

If you know one thing about the history of child care in Canada, it’s probably that it is a story littered with disappointment. Over and over, studies and task forces have called for the building of a universal child care system. Over and over, governments have promised action only to walk back their commitments or have their plans derailed by shifting political winds. Deputy Prime Minister and Finance Minister Chrystia Freeland, however, has promised that “this time, we’re going to do it.” Budget 2021, which Freeland delivered on April 19th, included $30 billion in funding to build a universal early learning and child care (ELCC) system.

A few days after the budget speech, I watched a webinar hosted by some of the country’s leading ELCC advocates. While they were understandably wary about some of the fuzzy parts of the announcement, the overall mood was hopeful — and not just because of the amount of spending, which is significant, but because of its substance. Freeland set an affordability target: in five years, she said, parents will have access to services for an average of $10 per day. She promised to focus on support for the higher quality not-for-profit sector. Money has been earmarked to improve accessibility, and to support culturally appropriate Indigenous ELCC programs.

Affordability, accessibility, quality, inclusivity: these are all standards that have been lifted from the child care movement. In other words, decades of advocacy paved the way for Freeland’s announcement. To be sure, the COVID-19 crisis “brutally exposed” (to use Freeland’s words) the desperate need for good child care and made it impossible for governments to ignore the centrality of care work to the economy. But child care was in crisis long before COVID-19, and advocates have spent years calling attention the scope of the crisis as well as our path out of it. That we may emerge from the pandemic with a universal system of ELCC is because of this long and deep groundwork of advocacy.

Freeland positioned her ELCC plan as the culmination of a “half-century of struggle” that began in 1970, when the Royal Commission on the Status of Women called for a national day care program. That proposal emerged out of and helped to fuel a period of passionate feminist organizing for more and better child care. Women’s Liberation groups were setting up child care co-ops, unions were demanding access to care for their female members, anti-poverty groups were linking the feminization of poverty to lack of day care access, and formal organizations like the National Action Committee on the Status of Women were positioning day care as among their top priorities. For feminist child care advocates, child care was a right, an essential public service, and a cornerstone of women’s equality. 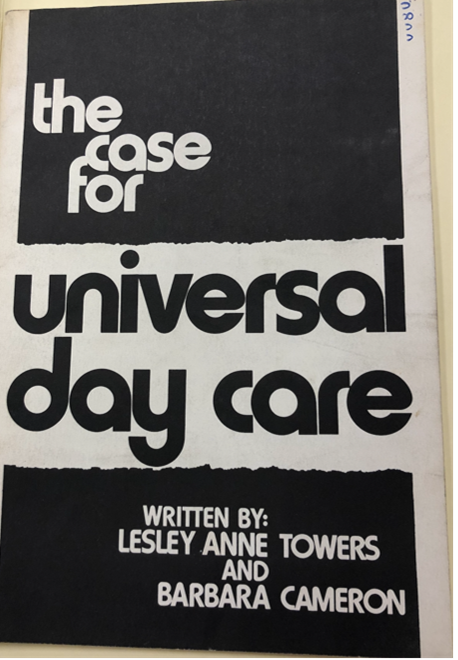 A self-explanatory report, which was written shortly after the RCSW. UOttawa, Canadian Women’s Movement Archives Collection.

The historical terrain of child care advocacy also has roots, however, that extend back much further than 50 years. Consider, for example, the Day Nurseries and Day Care Parents Association, a Toronto group that in 1946 rallied a broad coalition to oppose the closure of the wartime day nurseries. While the federal government could not be convinced to sustain their funding, the Association helped secure the passage of the Ontario Day Nurseries Act (1946). In the years that followed, provincial and local battles like these were a constant feature of the advocacy landscape, especially as provincial governments tentatively moved into the day care field in the 1960s. In British Columbia, a group of activists calling themselves the Child Care Occupation Forces sat in for 11 days in February 1973 at a Vancouver day care information office, helping to push the new NDP government towards reforms in the day care subsidy system. In Ontario, day care supporters’ coalition-building capacity was on full display in 1974/75 when protestors prevented the implementation of reforms proposed by Provincial Secretary of Social Development Margaret Birch, which would have lowered quality standards and led to the growth of for-profit daycares. Confronting the limits of welfare-oriented provincial day care programs reinforced for advocates the need for a more fundamental shift towards a universal system. 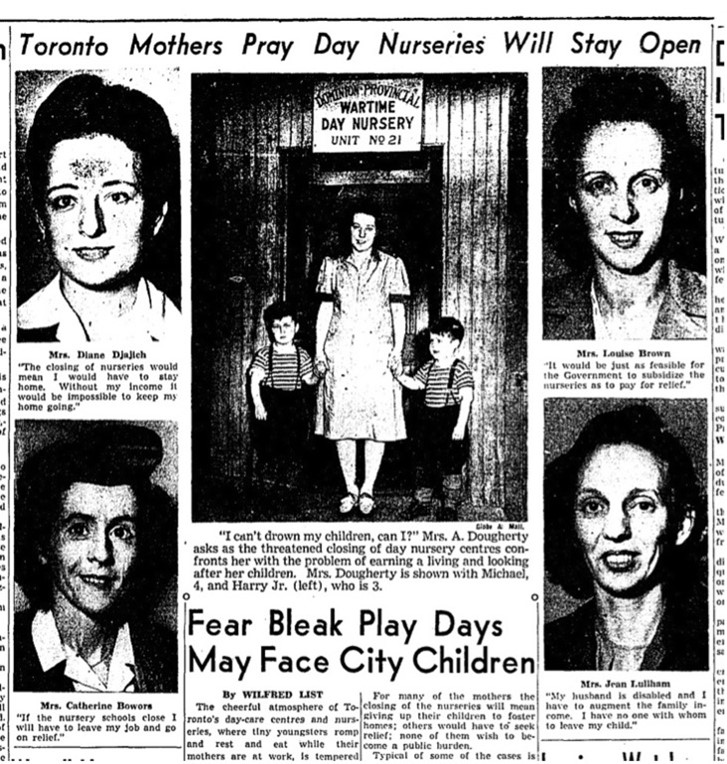 Toronto mothers fought to preserve government funding for the day nurseries that had been established during the Second World War. Globe and Mail 18 May 1946. 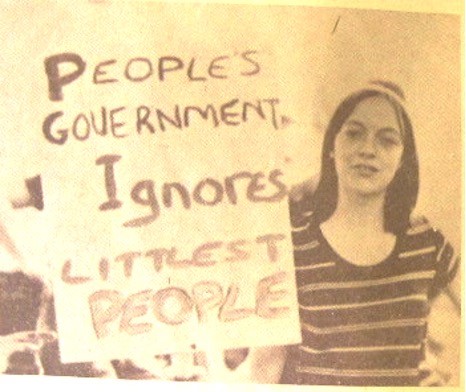 A member of the Child Care Occupation Forces protesting the NDP inaction on day care, Vancouver, 1973. From ‘Cuz There Ain’t No Daycare (or almost none, she said): A Book about Daycare in BC, Simon Fraser University Archives.

In 1974, a broad coalition of child care supporters successfully protested against the Birch Proposals, which threatened quality standards and privileged the growth of commercial centres. Toronto Star, 26 August 1974.

An important national voice emerged in the early 1980s with the establishment of the Canadian Day Care Advocacy Association. Its origins are in the 1982 National Day Care Conference in Winnipeg, which brought together hundreds of delegates from around the country to discuss ways to address the ongoing child care crisis. Infused with the activist energy of groups like Action Day Care, the conference mobilized the movement around clear principles: child care must be publicly funded, comprehensive, high quality, and universal. These principles remain at the heart of the national advocacy group that is now called Child Care Now, whose four decades of advocacy, which has been done in coalition with unions, child care workers, welfare rights groups, parents, and many more, has ensured that universal child care has remained on the agenda even in periods of political indifference (or outright hostility) to it.

Pamphlet from the Canadian Day Care Advocacy Association, the national advocacy association established in 1982 and which is now known as Child Care Now. From the beginning, their goal was a comprehensive, publicly-funded system. Canadian Women’s Movement Archives Collection.

This barely scratches the surface of a vibrant child care movement. I could also talk about the years of work from provincial advocacy groups like the Ontario Coalition for Better Child Care, the Coalition of Child Care Advocates of BC, and of course many others, both in propelling their own governments to take action – as Freeland pointed out, Quebec feminists have led the way in this respect – and in insisting on the necessary of federal funding to meet the challenge of system building. I could tell you about the masses of evidence generated by researchers and academics, a body of work that makes a compelling case for universal child care as a driver of gender equality, economic growth, and good outcomes for children (and in this respect I would direct you to the work of the Childcare Resource and Research Unit, overseen by indefatigable advocate Martha Friendly). Pick up virtually any report from the past several decades, and what’s striking is how seamlessly they would fit into Freeland’s budget speech. “Child care,” said the Canadian Day Care Advocacy Association and the Ontario Coalition for Better Child Care in preparation for yet another conference in 1992, “serves not only children and families, it is an essential component of equality and social justice and a necessary pre-requisite to job creation, economic renewal and growth.” 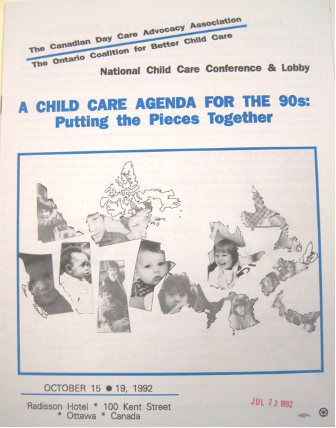 This “working conference,” hosted by the Canadian Day Care Advocacy and Association and the Ontario Coalition for Better Child Care in 1992, was designed to get child care back on the national agenda after the Mulroney government abandonment of plans for a national child care strategy. Canadian Women’s Movement Archives Collection.

COVID-19 has created a “window of opportunity,” as Freeland said, to “finally build a system of early learning and childcare across our country.” That it took tragedy and hardship of this scale to create such a window is unfortunate. But that we are primed to take advantage of this opportunity is because of this rich history of advocacy.

Lisa Pasolli (@lpasolli) is an assistant professor of history at Queen’s University. She researches the history of gender, social policy, and child care in 20th century Canada

Rise Up! Feminist Archive contains many important documents from the history of the child care movement