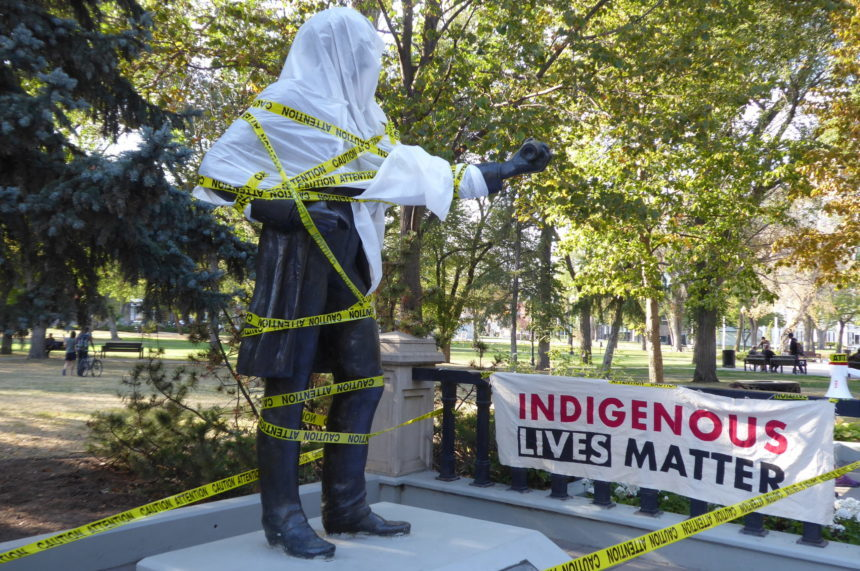 The statue of John A. Macdonald in Victoria Park (Regina) was covered in a white sheet and police tape on 28 August 2017. Photo credit: Britton Gray.

Timing is everything, and context and connections matter. A week after the US Capitol riot on January 6 sparked a reckoning with the growing threat of white supremacy and far-right extremism in North America, an open letter appeared as a full-page ad in the National Post celebrating the “remarkable” legacy of John A. Macdonald. A week later, as Donald Trump prepared to leave the White House, his administration released the 1776 Report arguing for a revival of nationalistic, patriotic history education. The differences in these documents are many and obvious. But there are also connections, ones that highlight how nostalgia, nationalism, and selective remembering are currently being used to serve white supremacy and protect the colonial status quo.

The “In Defense of Sir John A. Macdonald and his Legacy” letter was released by the Macdonald-Laurier Institute, an Ottawa-based think tank established in 2010, and a group referred to as both the “Friends of Canadian history” and the “Friends of Sir. John A. Macdonald.” Beyond Ryerson Politics and Public Administration professor Patrice Dutil’s description of the “Friends” as “a loose association of colleagues and acquaintances” in Toronto, the organization is a mystery. As a text, the letter is homey and more hagiography than history. It was released on Macdonald’s birthday, and was intended to defend the former prime minister against his critics. The letter was published with 130 signatories and currently has over 200 names endorsing it.

The Macdonald letter makes the most sense when read within the wider context of colonial nostalgia for an imagined past when the relationship between history, nations, and empires was untroubled by critique. It presumes a divide between “those who see Canada’s history as little more than a shameful series of mistakes and failures” and those who pay Macdonald appropriate thanks.

Most of all the letter is a response to critiques of Macdonald’s record around Indigenous peoples, settler colonialism, and residential schooling, curiously saying nothing about Tim Stanley’s work on Macdonald’s avowed white supremacy and anti-Asian racism. The letter weighs the legacy of Macdonald’s role in dispossessing Indigenous peoples, particularly in Western Canada, against the “Unity between English and French, Protestant and Catholic.” In doing so, it devalues the lives, potential, creativity, practices, values and knowledge that Indigenous peoples had and have to offer. The letter directly pits white settler nations against the history and lifeways of Indigenous peoples, including specific ethics around sharing, welcoming, respect, and most fundamentally, land. Not only does the directness of this attack reveal its true intent, it also sets the scene for further denial of oppression against not only Indigenous peoples, but every other minority that contributes to what has become Canada. The celebration of a certain version of Macdonald’s legacy and the reduction of his record with Indigenous peoples as part of “many other mistakes” enacts an all-too-familiar kind of white-washing of the past that shields white supremacy and protects the colonial status quo in Canada.

The Macdonald letter and the 1776 Report are connected by more than their timing. As part of their apologetics, both documents share an emphasis on the imperfection of human beings (especially applied to rich, white men with political power), the explanation of historical atrocity as unfortunate errors or “dark” legacies, and the possibility of and need for a certain and ennobling/enabling history of nation.

The similarities between the two documents are most striking in their framing. The introduction to Trump’s report explains: “1776 Commission—comprised of some of America’s most distinguished scholars and historians—has released a report presenting a definitive chronicle of the American founding, a powerful description of the effect the principles of the Declaration of Independence have had on this Nation’s history, and a dispositive rebuttal of reckless ‘re-education’ attempts that seek to reframe American history around the idea that the United States is not an exceptional country but an evil one.” Similarly, the Macdonald letter starts by drawing a line between those who “have grown increasingly vocal in calling for the shunning of figures like our first Prime Minister, Sir John A. Macdonald,” and calling instead for recognition of Macdonald’s “legacy of remarkable accomplishments.”

Historians have responded to both the 1776 report and the Macdonald letter with care. In the Canadian context, Shirley Tillotson has provided a detailed investigation of the claim that Macdonald supported free expression and the press. Robert Innes, Omeasoo Wahpasiw, Crystal Fraser, and Sean Carleton challenge the letter’s claim of Macdonald’s “concern for and friendship with the Indigenous peoples of Canada.” Andrew Nurse has argued that the document ultimately “ignores its own injunction” to interpretative balance. Christopher Moore engages the letter’s claims about Macdonald one by one and calls attention to the letter’s “blinkered denial of the Indigenous critique” and “insistence on a Macdonald-is-Canada Canada-is Macdonald, one-man-made us, put-up-more-statues vision of Canada.” Jerry Bannister notes the “emotional tone of the discussion” and argues that it “blurs the line between national and nationalist history.” Bannister’s point is applicable to both the Macdonald letter and 1776 report; they deliberately conflate history with nationalism and nationalism with education in ways that deserve careful and rigorous critique.

The Macdonald letter and 1776 Report, to be clear, are not anomalies. In fact, on the same day that the 1776 Report was released the UK Tories announced plans to amend legislation, justified by MP Robert Jenrick in a Telegraph article, that would protect historic monuments from “woke militants who want to censor our past.”  In March of 2021 the UK’s Sewell report was published. It rejected the claim that modern Britain is characterized by institutional racism. Among others, historian David Olusoga has called attention to the “historical illiteracy and internal inconsistencies” of the report, and to how it “defends the nation from charges no one is making.”

All of this is connected to the growing global conversation about how best to reckon with the past and its implications for the present and future. Scholars, artists, and activists around the world are arguing that histories of colonialism, enslavement, and racism should not be papered over, but engaged with, and responded to in substantial ways. Macdonald’s legacy has been and will continue to be examined for its connections to transatlantic slavery and to anti-Asian racism and policy. But it is the critiques of Indigenous scholars, writers, and activists and the revelatory work of Indigenous history that the Macdonald letter most directly responds to. Indeed, the Macdonald letter is best understood as an example of backlash to the reckoning with Canadian history, commemoration, and education that has occurred in the last decade. Like the 1776 Report, the Macdonald letter responds to compelling critiques of Indigenous and anti-colonial scholars and activists by clinging dangerously to nostalgia, nationalism, and a selective remembering that mythologizes white men and their histories.

Omeasoo Wahpasiw is a nehiyaw iskwew living in Epekwitk, and Assistant Professor of Arts and Education at the University of Prince Edward Island.

Adele Perry is Professor History and Women’s and Gender Studies at the University of Manitoba, where she is also director of the Centre for Human Rights’ Research.

Sean Carleton is an Assistant Professor in the Departments of History and Native Studies at the University of Manitoba.

2 thoughts on “Nostalgia and the Politics of Selective Remembering”