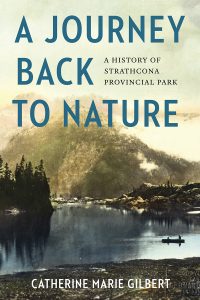 Located on Vancouver Island, Strathcona Provincial Park was established in 1911 by the British Columbia government. Covering 250,000 hectares, the park’s architects had an initial vision of it drawing tourists escaping the stress of modern urban living. Using Banff as a model, there were discussions of how to best create an appealing natural setting that wasn’t too natural – there were concerns that the area had too many cougars for tourists, so they culled the cougar population. At the same time, the park was seen a valuable site for resource extraction and efforts to conserve the space were viewed by some industries as disruptive to their business.

Over the park’s 110 years it has continued to be a site of tension between preservation and resource extraction. These debates are just part of Catherine Marie Gilbert’s wonderful new survey of the park. Covering the park’s evolution, the book wonderfully takes the reader through its various stages of development, from a site for relaxation to a site of extraction to a site for recreation. A story of Strathcona, the book places the story within a wider national context of park development, most notably the lack of consultation with Indigenous communities.

In this episode of the History Slam, I talk with Catherine Marie Gilbert, author of A Journey Back to Nature: A History of Strathcona National Park. We talk about the discovery of new photos of the park, how they were useful in writing the book, and the initial idea of Strathcona as ‘Banff West.’ We also chat about tourism as natural exploitation, the national resources in the park, and Strathcona (and parks in general) as part of Canada’s colonial project.