This year marks the 50th anniversary of German-Canadian scientist Dr. Gerhard Herzberg’s Nobel Prize in Chemistry. The prize was awarded in recognition of “his contributions to the knowledge of electronic structure and geometry of molecules, particularly free radicals.” In celebration of this anniversary, Defining Moments Canada, in collaboration with Heritage Canada, the National Research Council of Canada, University of Saskatchewan, and ESRI Canada, is currently planning a national commemorative project: Herzberg50. 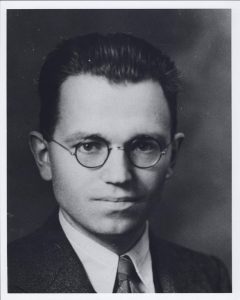 Gerhard Herzberg was born in Hamburg, Germany on December 25th, 1904. From an early age he developed a keen interest in the sciences, particularly astronomy, physics and chemistry. According to his biography, while still in secondary school he attended supplementary lessons in modern physics. These lessons, conducted by Professor Wilhelm Hillers, familiarized Herzberg with foundational theories in chemistry, physics and quantum mechanics. Herzberg initially considered a career in astronomy, but lacked the funds to pursue it any further. In 1924, he ultimately decided to pursue engineering physics and enrolled in the Technical University at Darmstadt. By the time he was 24 years old, he was well established in his field, publishing a number of academic papers on the topics of atomic and molecular physics, as well as obtaining a Doctorate in Engineering Physics in 1928.

Following his graduation, Herzberg entered a postdoctoral fellowship at the University of Göttingen. Following that, he returned to Darmstadt where he spent five years conducting research on spectroscopy.  Spectroscopy is used to analyze the ability of molecules and compounds to emit and absorb different wavelengths of light and electromagnetic radiation. Through understanding the properties of the light/radiation that is emitted (or absorbed) scientists can learn more about the characteristics of molecules and compounds, including their structure and the types of chemical bonds they contain.

While completing his postdoctoral fellowship, Herzberg met Luise Hedwig Oettinger, a university student also focusing on spectroscopic research. The pair grew close and eventually married on December 30th, 1929. Over the years Luise, who received her Ph.D from the University of Frankfurt in 1933, co-authored a number of scientific papers with her husband.

The Herzbergs’ academic life in Germany would soon end in 1934 when the Nazi regime rose to power and began implementing new restrictions against Jewish scholars in academic institutions. Herzberg received notice that he would no longer be permitted to teach at Darmstadt because of Luise’s Jewish heritage. With the help of John W. T. Spinks (a chemist who visited and became closely acquainted with Herzberg in Darmstadt) and Walter C. Murray at the University of Saskatchewan, as well as funding from the Carnegie Foundation, the Herzbergs moved to Saskatoon that following year . 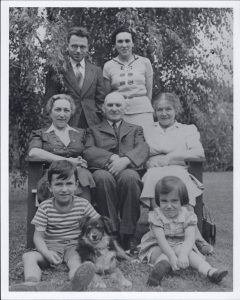 From 1935 to 1945 Herzberg established himself at the University of Saskatchewan, where he continued his research on molecular and atomic spectroscopy, as well as publishing three new books. He then spent the following three years at the University of Chicago’s Yerkes Observatory investigating “the absorption spectra of many molecules of astrophysical interest.” In 1948, the Herzbergs relocated back to Canada when Herzberg was invited to “establish a laboratory for fundamental research in spectroscopy” at the National Research Council (NRC) of Canada.

It was during his time at the NRC that one of his key discoveries was made–the observation of the spectra of methylene radical (CH2). Scientists describe free radicals as chemical species that have an unpaired electron in the outer valence shell. Free radicals can be found as intermediates in a variety of chemical reactions. It was Herzberg’s contribution to the understanding of free radicals that contributed to his Nobel Prize win in 1971. Dr. Gerhard Herzberg had two children and passed away on March 3rd, 1999 at the age of 94. 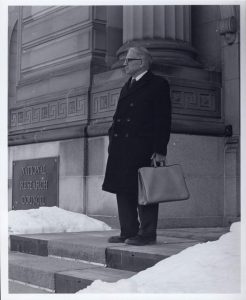 Aside from his numerous scientific achievements, Herzberg is remembered for his love of music and for his advocacy for basic science research and good science policy. Throughout his life he developed a passion for music, learning to play the violin in his youth and then taking singing lessons later on as an adult– even holding concerts for his family and friends!

In addition, he devoted many hours to advocating and promoting the value of basic and pure science research during a time of intense debate on science policy and what the focus of scientific research in Canada should be. Within his speeches, for example, Herzberg highlights the “wide chasm in understanding of scientific matters between scientists and non-scientists.”

In an attempt to draw the sciences and humanities together he adamantly discussed the “connection between science and society” and “the cultural aspect of science”, both in the context of education and policy. Herzberg viewed the sciences as “a creative vocation, like art and music.”

The Herzberg50 commemoration will speak more broadly to Herzberg’s philosophy and highlight the interdisciplinary connections between the sciences and humanities – topics that are still extremely relevant in Canada today.

Herzberg50 will commemorate Dr. Gerhard Herzberg’s Nobel Prize Award in Chemistry– exploring and learning more about his personal life story and making his scientific research accessible to all readers. This story will be told through a bilingual virtual exhibit and a series of articles that will be grounded in six broader themes in Canadian science:

Herzberg50 will include free educational resources and support for teachers and students through supplemental lesson plans, digital tools and artifacts that will focus on highlighting interdisciplinary relevance. This project will also become an invaluable digital resource for students of Canadian History, informing and enhancing the experience of online learning during the COVID-19 pandemic and beyond. Herzberg50 will be available gradually on the Defining Moments Canada (DMC) website over the next 10 months and then will transition into NobelCanadian– a digital commemoration project celebrating all of Canada’s Nobel Laureates in 2022.

Stay tuned for the upcoming launch of Herzberg50! 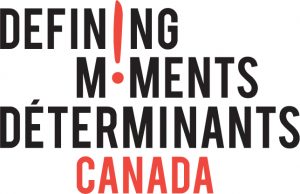 Defining Moments Canada is an online Canadian heritage organization dedicated to commemorating ‘definitional moments’ in our shared history through trans-disciplinary education initiatives. This organization has hosted a number of commemorative projects such as Spanish Flu, VEDay75, Juno75 and Insulin100. DMC’s approach is informed through Curatorial Thinking and the SASS framework (Selection, Archiving, Sense-Making and Sharing). This process encourages students to critically examine research material and consider their own “position in time and space” in relation to the narratives they study (Mant, 2020), Moreover, with the onset and continuation of the COVID-19 pandemic, DMC is advocating for the re-conceptualization of education to promote interdisciplinary or “syndemic” thinking.

The Next Pandemic and the Case for Syndemics Thinking –Neil Orford