17 members of the Parks Department after taking the oath as auxiliary constables. Windsor Daily Star, 10 Sep 1946.

In a webpage dedicated to the history of its Auxiliary Service, the Windsor Police force presents the story of the “Windsor Slasher,” responsible for a series of violent attacks in the city between 1945 and 1946. The story explains that deaths resulting from the series of attacks led directly to the formation of the Auxiliary Service when “in September 1946 the first group of volunteers to assist the Windsor Police were formed from Parks & Recreation personnel.” Two key historical facts, however, are missing from this story. The first relates to the identity of the victims. While the story describes the Windsor Slasher as a “Jack-the Ripper style killer,” the killer in fact targeted queer men, attacking five and killing two, in Windsor’s riverside parks over two summers. Second, the story leaves out that the main targets of the new Auxiliary Service patrols were also queer men. The result is the whitewashing of a traumatic period in the history of Windsor’s queer communities.

The Windsor Slasher has been written about a few times. The most extensive researched work was done by Patrick Brode. Brode’s book is thorough and well written but authored from a straight lens. One aspect that has not been touched on, and which had one of the largest repercussions for men who have sex with men, was the creation of the “War Against Sex Crimes” campaign. The “[f]ear of homosexuality and sexual deviancy and connections with homicide were commonly articulated”[1] in the Windsor Daily Star. Parks were where the Windsor Slasher found his victims. The parks would be the focus of this new campaign. On July 8th, 1946, two days after the police arrested the Slayer, the Star reported:

If, as the police believe, they have solved the epidemic of stabbings… this still does not clean up the disgraceful situation which exists in our parks… Our parks should be places where the citizens… can find healthful, pleasant recreation. Instead, some of them are being monopolized by the vilest scum of humankind… which have come to be part of the habitual pastimes of certain of the degenerates.[2] 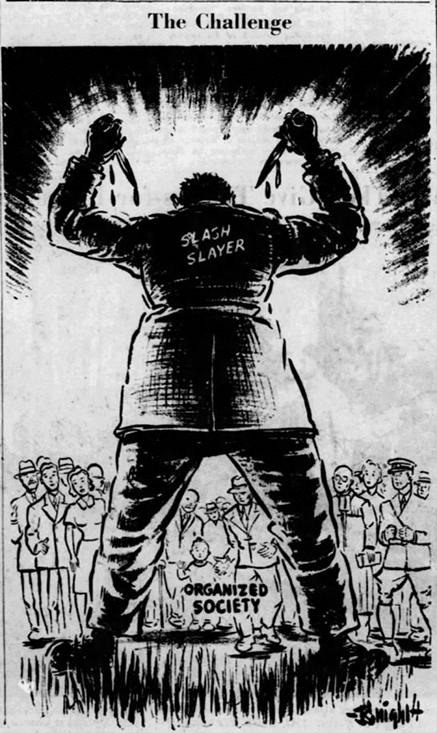 On July 29th, eleven community groups and individuals, many with religious, union, and educational affiliations, sent delegates to meet with Mayor Arthur J. Reaume, W. H. Vaughan of the Windsor Daily Star, and Chief Constable Claude Renaud. The meetings ended with a new city campaign against sex offences. According to the Star, The participants wanted “the courts [to] be urged to impose maximum sentences in all cases of sex crime. Lashes… along with jail terms, should be administered as a deterrent to such crimes in Windsor.” The meeting even included a statement for a commendation for Magistrate J. A. Hanrahan “for his…drive against the high incidence of sex crime in Windsor.”

Earlier that month, Hanrahan started a court case which ended with a cruel verdict. Alex Voligny was the fourth victim of the Windsor Slasher. While Voligny was recovering in hospital, the police went through his clothes and found “obscene” pictures. Afterwards, Voligny told the police what exactly happened and was charged with gross indecency. At Voligny’s hearing in October, reported in the Star, Hanrahan went on at length about moral perversion, dividing queer men into two types:

The first is the type biologically and mentally twisted or warped… They are apparently quite unaware of any moral question involved in such conduct… The other is the moral pervert, one who has knowingly deteriorated in degeneracy. Insofar as potential danger to the public morals is concerned, it is a distinction without a difference.

Voligny was pronounced a “moral pervert” after a psychiatric examination and was incarcerated for eight months “…. to deter [him] in the future and give others of [his] particular type [a] reason to pause.” The Windsor Police Service website acknowledges that Voligny “was able to recall [his story] to police.” but there is nothing recorded about how Voligny was also arrested and incarcerated because of his honesty. In fact, while investigating the Windsor Slasher, the police “investigated hundreds of men and arrested and charged dozens.”[3]  This part of the account has been publicly erased. L. Tierney was one of the victims found during the summer park patrols. As reported in the Star, “Special Constable Weston said that [the] accused came onto the dock and accosted him. [Special Constable] Adlington watched from a hiding place. Weston said that Tierney made certain proposals and gestures and the two went across the street into the alley. Here Weston took Tierney into custody.”

The most significant outcome of the city’s meeting with community representatives was to recommend that employees from the parks department be appointed “Special Constables,” with the authority to arrest men while patrolling the parks. A month after the Slasher was arrested, on September 10th, 1946, Magistrate Angus W. MacMillan administered Special Constable oaths to twenty employees of the Windsor municipal parks department.  Through time this group became the Windsor Police Auxiliary, the oldest auxiliary service of its kind in Ontario. 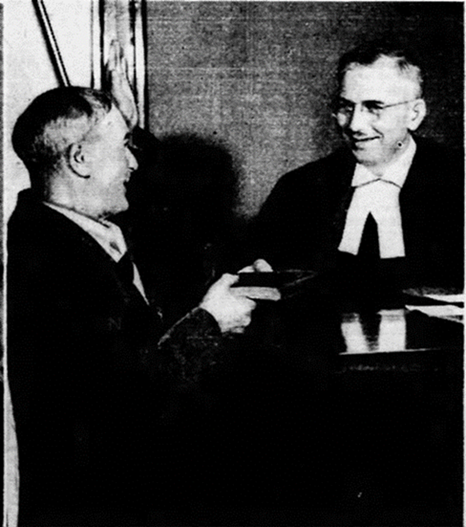 Nine months after the Slasher was caught, the Windsor Star still wrote about how difficult it was to deal with sex crimes in Windsor with an “estimated… some 5,000 homo-sexuals [sic] in this area.” The practice of entrapping queer activity in parks persisted for six decades. In 1986, shortly before midnight in Jackson Park–a popular gay public space–policemen pretended to be interested in connecting with other men in the parking lot, washroom, and brush areas of the park, as well as the adjacent railway lands. Four men were arrested. One of the men arrested said his attention was drawn to a casually dressed man who flashed the lights of his car, and then got out and sat in a suggestive pose on the car’s hood. After they had a short chat, a second car pulled up and two plainclothes officers appeared.

In the 1980s, Sgt. Ian Chippet of the Windsor Police justified the longstanding practice of entrapment in an interview with the Star by saying that “[t]hey can do whatever they want in privacy, but it becomes a police matter when it’s happening at a park and parents and children are being exposed to this.” All the arrests happened late at night when those children should have been in bed. The Windsor L/GCSG (Lesbian and Gay Community Service Group) got involved and supported the men who were entrapped, stating that their rights were violated because no sex acts were observed, and they were technically on private property (the CP railway allowance beside the park). The charges were dismissed.

The Windsor Police Service webpage is not the only place ignoring the significance of this historic queer event. In many Canadian queer timelines (like this one), Canada’s first gay serial killer has also been forgotten. Hopefully, in the future, the Windsor Police Service webpage and Canada’s 2SLGBTQAI timelines will recognize this heterosexist violence and what the practice of establishing “park cops” did to traumatize the queer community in mid-twentieth century Windsor.

Walter T. Cassidy is a high school teacher at Walkerville Collegiate Institute in Windsor. He is also Chairperson of the Windsor/Essex Rainbow Alliance (WERA), a group of individuals whose goal is to institute a method of collecting, preserving, and disseminating the local history of the 2SLGBTQIA community in Windsor/Essex county. Email him at walter.cassidy@publicboard.ca.

[2] The language at this time rarely included words like homosexual. Instead, words like degenerate, pervert, sex crime, loafer, immoral, and unnatural were terms that denoted acts of queer culture or sex.