The Graphic History Collective recently released RRR #32, by historian and illustrator Frances Reilly, that looks at police surveillance and democratic socialism in Cold War Canada. In particular, the poster examines RCMP spying and the thirty-five year long covert program, Operation Profunc (PROminent FUNCtionaries of the Communist or Labor Progressive Party) that began in 1948. This program planned to arrest Canadians in the event of a Communist-led attack or a leftist insurgence from within Canada’s own borders.

Poster and essay by Frances Reilly

In the early 2010s, Canadian journalists revealed to a shocked public that the Royal Canadian Mounted Police (RCMP) had an extensive surveillance file on former Saskatchewan premier, founding leader of the New Democratic Party, and architect of Medicare Tommy Douglas. As it turned out, the RCMP had spied on thousands of Canadians, including Douglas, throughout the Cold War, looking for ties to socialism, communism, and leftist politics. Even more shocking, they planned internment camps through a program called Operation Profunc. Some targets of surveillance were official political parties, like the Communist Party of Canada and the Co-operative Commonwealth Federation (later the New Democratic Party). Other targets were considered suspicious for being socialist sympathetic or having ties to Eastern Europe. RCMP spying was also driven by contemporary homophobia and assumptions that gays and lesbians were especially susceptible to Soviet blackmail, which led to extensive purges of the civil service. The RCMP monitored peace organizations and women’s groups that challenged international diplomacy and demanded nuclear weapon bans. Unions, consumer advocates, and student groups were watched for their criticism of capitalism. RCMP surveillance was extensive, but despite its fervour socialism and socialist-sympathetic movements grew in Canada throughout this period.

The RCMP’s deep-seated fear of collectivism drove Cold War surveillance of leftist Canadians. The extensive spying eventually led to a public re-evaluation of national security and accountability during the late Cold War. While the fear of Soviet spies operating within Canada was legitimate in the 1950s and 1960s, the RCMP rarely differentiated between democratic socialism and Soviet Communism. One example of RCMP spying’s extent and secrecy was the thirty-five-year long covert program that began in 1948: Operation Profunc (PROminent FUNCtionaries of the Communist or Labor Progressive Party). This program planned to arrest Canadians in the event of a Communist-led attack or a leftist insurgence from within Canada’s own borders. Those arrested Canadians would be interned in remote but accessible camps across the country. The Profunc planners pulled the design of these camps from the Second World War internment of Japanese-Canadians, communists, and Italian and German nationals. At its height in the mid-1950s, Operation Profunc kept lists of thousands of Canadians to intern if the need arose and chose a dozen sites as future internment camps. Operation Profunc germinated from early Cold War fears about the Korean War extending to Canadian soil, Soviet nuclear attacks, and widening Soviet spy rings through increased immigration and travel from Eastern Bloc countries. By the 1970s, however, fears of Soviet operatives were out-dated because of shifts in international diplomacy—yet Operation Profunc remained active and continued monitoring Canadians.

Over the decades, the RCMP’s methods of spying on leftist Canadians ignited growing concern for the lack of civilian oversight of the police and intelligence. In 1977, the federal government responded to these calls with the McDonald Commission (or “the Royal Commission of Inquiry into Certain Activities by the RCMP”) to examine illegal methods of police surveillance throughout the twentieth century. The McDonald Commission noted that a mass internment program, which it could not name for the sake of national security, established in 1948 (the same year as Operation Profunc) was a significant example of the need for civilian oversight. The McDonald Commission’s recommendations led to a civilian-based intelligence program, the Canadian Security and Intelligence Service (CSIS), in 1984.

In spite of decades of surveillance, socialist and leftist groups successfully brought public attention to the welfare of Canadians in the twentieth century. The New Democratic Party, formed in 1961, introduced democratic socialism into mainstream Canadian politics. Democratic socialism demanded government intervention to alleviate poverty and inequity. Regardless of surveillance, socialists in Canada fought for citizens’ rights to governmental support and a social safety net. Considering the context of the Cold War and the excessive fears wrought by anti-communism, socialist successes like universal healthcare, universal pension plans, maternity allowances, and unionization across Canada were impressive and important victories. 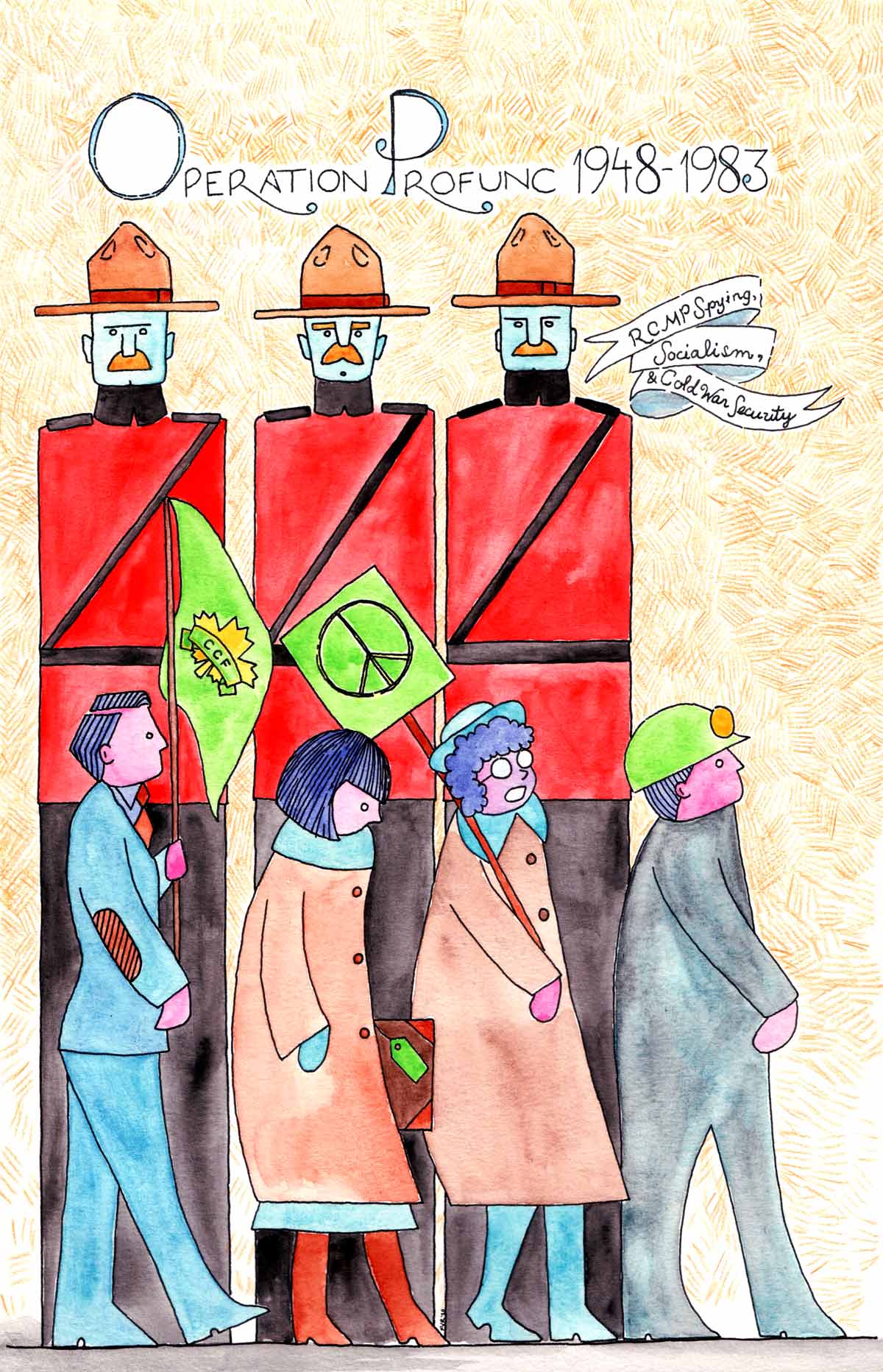 [Image Description:“Along the top of the poster it says, “Operation Profunc 1948-1983: RCMP Spying, Socialism, and Cold War Security.” The poster shows three RCMP officers in red uniforms towering above four people. One person is in a suit, holding a flag that says CCF, another is in a dress holding a suitcase, the third holding a flag with a peace symbol and the fourth is in a mining helmet.'”]

Frances V. Reilly is a historian and illustrator based in Toronto. She grew up on Canada’s west coast and holds a PhD in history from the University of Saskatchewan. Her work focuses on anti-communism, police surveillance, sexual psychiatry, and atomic culture in Cold War Canada. Her most recent article, “Dale and the Bomb: Exploring the Nuclear Future and Cold War Anxiety in 1950s Canadian Children’s Literature,” appears in the Journal of Canadian Studies (Spring 2019). She draws cartoons and designs greeting cards and beer labels, and her paintings explore the natural world, domestic life, and themes of comfort and threat. You can find more of her work on Instagram: @fvreilly.