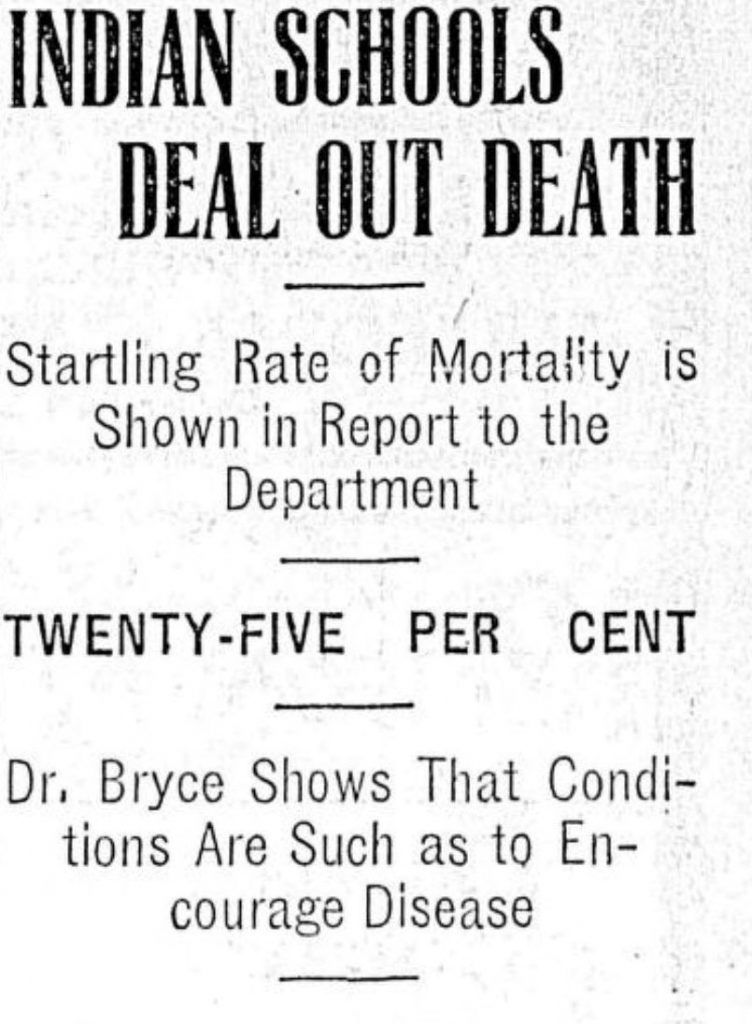 Article from the front page of Victoria’s Daily Colonist, 16 November 1907.

As the result of the news of unmarked graves being located at former residential schools across Canada, many people are finally reckoning with the history of the Indian Residential School (IRS) system. While school survivors and Indigenous communities are not surprised by the recent revelations, some Canadians have been shocked to learn of the high rates of death and disease at the schools. They shouldn’t be, though. The horrors of the system were always hiding in plain sight.

As was recently reported in the Globe and Mail by Crystal Fraser, Tricia Logan, and Neil Orford, the Department of Indian Affairs’ own medical officer, Dr. Peter Henderson Bryce, blew the whistle on the IRS system in the early 1900s. In a 1907 report on the inadequate care that Indigenous children were receiving in some schools, Bryce outlined the ills of the system – including death and disease – that many Canadians are only learning of now. The Department of Indian Affairs, however, chose to ignore Bryce’s findings, burying his report and thwarting his subsequent calls for reform.

Yet, it is too easy for Canadians to say that the public was not made aware of Bryce’s report and apply blame solely to church and state officials who downplayed and ignored his warnings. The report was leaked to the public, and an examination of newspaper articles from the early 1900s reveals that readers across the country were presented with the findings.

On 15 and 16 November 1907, Ottawa’s The Evening Citizen and Toronto’s Globe respectively, published articles describing the “Absolute Inattention to Bare Necessities of Health” and the “Large Percentage of Deaths” occurring in residential schools. Both articles highlighted various findings from Bryce’s report and included the following statistics for readers: “Of a total of 1,537 pupils reported from fifteen schools… 7 per cent are sick or in poor health, and 24 per cent are reported dead.” Citing tuberculosis and poor ventilation as the main causes of disease and death, these articles demonstrate the consequences that poor living conditions had on Indigenous children.

Bryce’s report was also covered in Victoria’s Daily Colonist and Toronto’s Saturday Night on 16 and 23 November 1907, respectively. The Daily Colonist explained how significant it was that Bryce’s report was released at a time when the churches running the schools were also pressuring the government to take more control over “Indian education.” The coverage makes clear, however, that both church and state were responsible for the poor conditions in many residential schools. Stating that the release of Bryce’s report “contains information that should startle the country and at last compel the attention of Parliament,” Saturday Night provides evidence that some Canadians read about Bryce’s report and were informed about the inadequate conditions within residential schools. But the article also anticipated Canadian apathy: “[Bryce’s] report is printed, many people will scan the title on the cover, and some will open it, a few will read it, and so the thing will drift along for another year. And so with the next year, and the year after.”

Indigenous peoples also waded into the public debate and demanded action. In an article published by the Globe on 8 February 1908, Mohawk political organizer F. O. Loft acknowledged Bryce’s report and used its findings to critique the IRS system and call for changes. Loft noted, “I read a brief report of the discussion in the House of Commons bearing upon the report that has been issued by Dr. P. H. Bryce on the condition of Indian schools and the children in them.” He goes on to say how “[Bryce] speaks of the remarkable mortality of the children from tuberculosis and the unsanitary condition of the schools.” Continuing to speak about the misconceptions of the capabilities of Indigenous peoples and how the government must invest more into their children’s education, Loft not only provided evidence of public awareness about the IRS system, but also argued that Indigenous peoples should have more control over their own education.

If Canadians are committed to putting truth before reconciliation, it is important to acknowledge that many Canadians were presented with evidence of the horrors of the residential school system in the early 1900s yet chose a course of inaction. Canadians read about Bryce’s findings in their newspapers but did not effectively lobby their church leaders and government officials for change. As a result, many Indigenous peoples – children and youth – continued to suffer and even die in residential schools across the country for another 90 years. The cycle of Canadian indifference and inaction in the face of ongoing injustice for Indigenous peoples continues today. The only way to break the cycle is for Canadians to acknowledge the truth about the history and ongoing legacies of the IRS system and commit to decolonization and meaningful reconciliation.

Kathleen McKenzie is a proud Indigenous woman from the Gitanmaax First Nation with roots in Treaty 5 territory. She currently resides on Treaty 1 territory in Winnipeg, Manitoba where she is an undergraduate student at the University of Manitoba pursuing a degree in Labour Studies and Sociology.

Sean Carleton is an Assistant Professor in the Departments of History and Indigenous Studies at the University of Manitoba.

The authors wish to acknowledge the University of Manitoba, and the Undergraduate Research Award program specifically, for providing the funding that made this research possible.