Hear, Here is a postmodern heritage project that began in La Crosse, Wisconsin in 2015 with the aim to make hidden histories visible in public space. Based in part on Shawn Micallef, James Roussel, and Gabe Sawhney’s [murmur] project, the concept behind Hear, Here is simple: within a particular community, project organizers post an orange sign with a phone number. 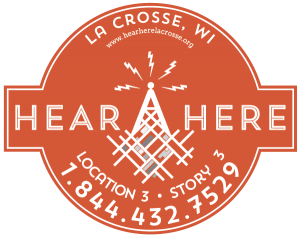 When the number is dialed, the caller will hear a story about the space in which they stand and have the opportunity to contribute a story of their own. There can be several stories associated with each sign. This platform has many advantages over traditional street-level heritage mediums. A major advantage of Hear, Here’s use of oral history is that it allows historically underrepresented or unrepresented voices to become unobscured. As a community-based project focused within gentrifying or gentrified areas, the project aims to reveal stories that have been covered over as communities change. By making hidden histories visible in public space, Hear, Here signs raise awareness about problems within the community and can become a catalyst for change.

Under the direction of Dr. Michelle Hamilton and with support from graduate students in the Public History program at Western University, Hear, Here expanded to three neighbourhoods in London, ON in 2018: The Village, Great Talbot, and SoHo (South of Horton). 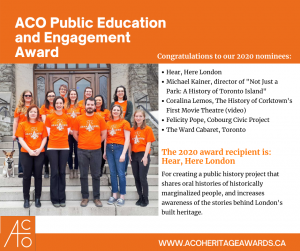 The SoHo neighbourhood was once home to a growing population of formerly enslaved Black people in the mid-19th century. They were refugees who had used the Underground Railroad to escape enslavement in the United States and settled in London as it was one of the terminus points of the secret network. As more refugees settled in SoHo, especially in the area close to the Thames River, they built a community.

The stories of the Black men and women who escaped to Canada via the Underground Railroad are exactly the stories that Hear, Here aims to bring to public spaces, which is why many of these accounts are included in the London project. The refugees’ stories were first documented and published in 1856 by Benjamin Drew. Now, when dialing the Hear, Here phone number, the caller will hear a voice actor recount the experience. The stories focus on the violence endured, knowledge of the Underground Railroad, the prejudice encountered in Canada, and the successes.

Hear, Here London’s Slavery and Freedom Tour, which is available on the Driftscape app, features stories of those formerly enslaved as well as stories surrounding the first African Methodist Episcopal Church (often called the Fugitive Slave Chapel). The church was built in 1848 at 275 Thames Street to serve the growing Black community. In an effort to preserve the building, it was moved to Grey Street in 2014. Further restoration plans include relocating the building to Fanshawe Pioneer Village. 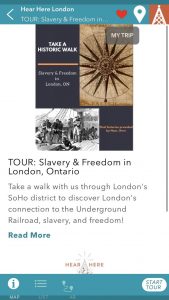 Screenshot from the Driftscape App

In this month’s episode of Historia Nostra, Erin chats with Dr. Ariel Beaujot, Hear Here’s Executive Director, about how the project started, how it’s changed since 2015, and where the project’s going in the future. Lis Edwards also joins to walk Hear, Here London’s Slavery and Freedom Tour in London’s SoHo neighbourhood.

Katrina Bjornstad is a public historian who assisted with Hear, Here La Crosse as an undergraduate at the University of Wisconsin-La Crosse. She was the research assistant for Hear, Here London while completing Western University’s MA Public History Program in 2018-19.