*The Art of Silence is debuting as part of Hot Docs in Toronto, showing at 2:45 on Monday May 2 and 8:30 on Sunday May 8. The film can also be streamed in Canada for five days starting May 3. 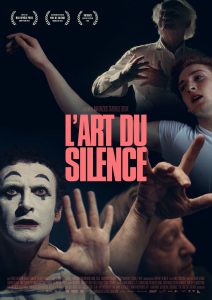 In 2022, mime is probably not what you think of when discussing popular culture. The image of an individual with their face painted white, probably acting like they are trapped in a box, doesn’t demand attention within the ever-so-crowded cultural landscape. At the same time, however, the idea of movement as medicine remains popular. For many of its practitioners, mime, for all its potential performative artistry, is about the movement and the benefits that come from it. This includes a mime who, following Parkinson’s diagnosis, is using mime techniques to combat symptoms while also teaching other patients.

That level of depth in the meaning and power of mime were on full display throughout Marcel Marceau’s life. Arguably the world’s most famous mime – even after his 2007 death – Marceau’s career spanned the entirety of the second half of the 20th century. Marceau survived the Second World War and occupation of France, helping Jewish children escape Nazi occupation, but his father was killed in the Holocaust. The experiences of those years shaped the rest of his life, during which he was committed to peace and bringing love to communities through his performance.

This is the subject of The Art of Silence, a new documentary that is debuting as part of Hot Docs Festival in Toronto. Profiling the life of Marcel Marceau, director Maurizius Staerkle Drux follows the famed mime’s path to the stage, demonstrating how his early life influenced his approach to his life and career. Seeking to spread happiness around the world through his performances, his remarkable ability to connect with others, both on and off stage, left an incredible mark on those he touched. The films tells this story through the voices of those people, from his family to those who continue to be inspired by his art. Totally different from what I expected, the film shows the power of silence and the importance of appreciating the humanity within us all.

In this episode of the History Slam, I talk with director Maurizius Staerkle Drux about the film. We discuss why Marcel Marceau made a compelling figure for a documentary (4:18), Marceau’s survival of the Holocaust (8:52), and the family’s inclusion in the project (12:32). We also chat about the state of mime today and its healing benefits (15:12), Marceau’s push to create good through his performances (20:22), and the power of silence (25:16).