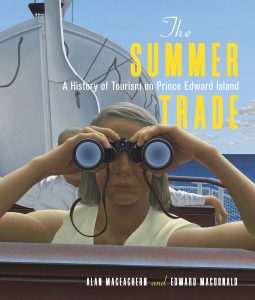 After two down years, tourism is rebounding as we head into the summer. From long lines at airports to rental car shortages to sold out hotels, there is a strong, pent up demand for travel. This is welcome news to communities where hospitality is the main economic driver as employees return to work and prepare to again welcome visitors.

One such location is Prince Edward Island, which welcomed 1.6 million tourists in 2019, contributing an estimated half billion dollars to the provincial economy. The two full years since have seen drastic decreases to those numbers, but there is some optimism that this summer will bring people back in big numbers, helping restore the Island’s tourist trade, which, from its humble beginnings in the 19th century, continually expanded through the 20th century to become a key driver of the Island’s economic and cultural life.

That transition is the subject of Alan MacEachern and Edward MacDonald’s new book The Summer Trade: A History of Tourism on Prince Edward Island. Ranging from the early days of the Island’s tourism trade through the onset of the Covid-19 pandemic, the book explores how PEI has attracted tourists and how the growing tourist trade has come to influence the local culture. With seaside resorts, Anne of Green Gables attractions, and even the draw of the Confederation Bridge, MacEachern and MacDonald explore the evolution of the complicated relationship between Islanders and their visitors. In addition to the book, if you’re in Charlottetown this summer, be sure to check out the accompanying exhibition going on at the Confederation Centre of the Arts until October 9.

In this episode of the History Slam, I talk with Alan and Edward about the book. We discuss the start of the Island’s tourist trade and the impact of Confederation (6:00), how 20th century changes in transportation influenced tourism (16:00), and the symbolism of the Confederation Bridge (18:45). We also chat about the tension between tourism and local culture (25:15), the importance of Anne of Green Gables (32:50), and attracting return visitors along with the challenges of rebounding from the pandemic (39:20).

Sean Graham is a historian of Canadian broadcasting, an Adjunct Professor at Carleton University, and a contributing editor at Activehistory.ca