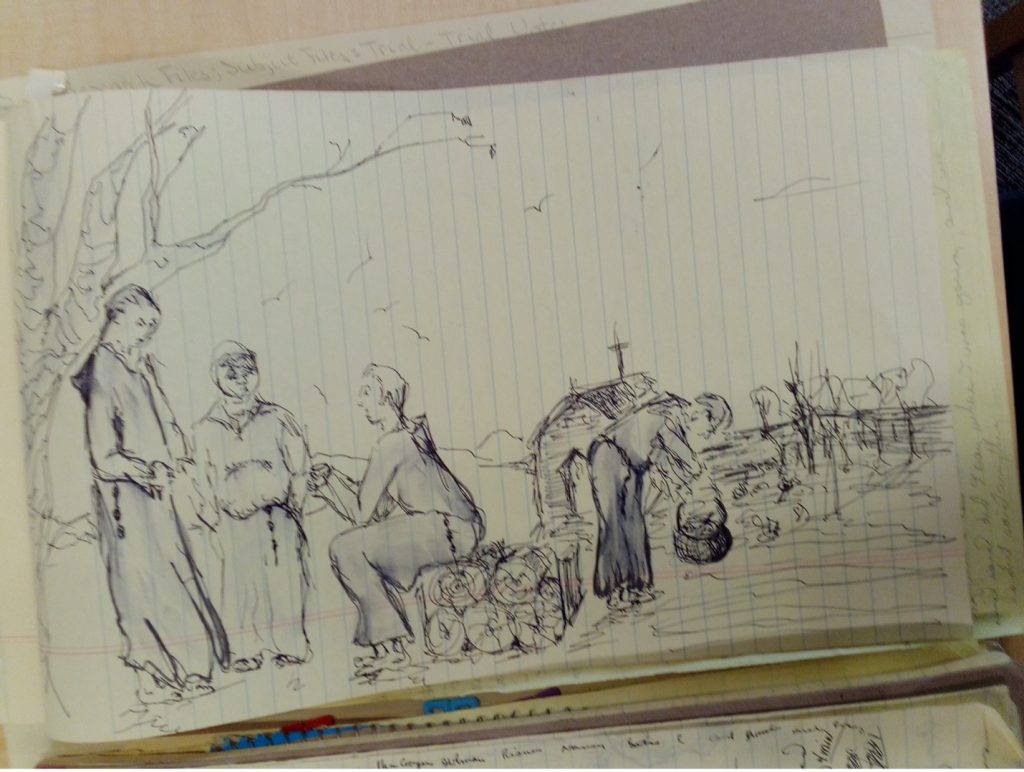 For the past few weeks, I have been deep into records relating to the 1980s sanctuary movement in the United States. This movement, which has been recalled in recent years as a result of renewed efforts to protect refugees and present-day undocumented migrants, consisted of a loose coalition of churches that offered refuge to arriving migrants from Central America (largely Guatemala, Nicaragua and El Salvador) in the face of the Reagan administration’s ruthless foreign policy and its related refusal to consider people fleeing from the region as refugees.

As I research, I have been thinking about the significance of time to the refugee experience. Depending on the number of days spent in refuge, the experience of sanctuary can become almost carceral.[1] At the same time (no pun intended), refugees need time to prepare asylum claims and convince adjudicating authorities of their need for refuge.

Using the concept of time as a signifier of a particular kind of experience, I would like to use this post to consider the significance of doodles I came across while exploring the Miriam Davidson Papers held in Special Collections at the University of Arizona. Davidson was both a reporting journalist and a participant in the sanctuary movement of the 1980s. Her research notes, which I have been mining, informed the writing of Convictions of the Heart: Jim Corbett and the Sanctuary Movement (University of Arizona Press, 1988) that details the background, unfolding, and impact of the federal prosecution of the sanctuary movement.

The doodles in question were produced by Davidson’s late common law husband, artist David L. Jones, over the course of the 1986 “Sanctuary Trial”. As I will detail in this post, they offer some insights into how the trial was experienced. Additionally, they shed light on the ways in which sanctuary providers viewed efforts by the US federal government to prosecute people for providing shelter and attempting to assist people in the filing of asylum claims under the terms of the 1980 Refugee Act (US) and the 1967 UN Protocol Relating to the Status of Refugees.

First, some context. From approximately 1981 to 1987, hundreds of people seeking refuge in the United States were assisted by churches in Mexico and in the border states of Arizona, California and Texas. Volunteers served as escorts and provided transportation for people who risked perishing as they crossed the US – Mexico border (especially those who confronted the harsh conditions of the Sonoran desert). Many American volunteers became involved after learning of people perishing of dehydration and heat exposure, as well as the illegal deportations and low acceptance rates of people wishing to seek asylum. Although the US federal government appeared dismissive of the sanctuary movement, in reality the Department of Justice and the Immigration and Naturalization Service (INS) were concerned about the depth and breadth of the movement, particularly after several churches including the Southside Presbyterian Church in Tucson, Arizona, declared themselves public sanctuaries on 24 March 1982. Their concerns swelled alongside the growth of the movement, which eventually involved the Chicago Religious Task Force on Latin America in somewhat of a coordinating role.

The sanctuary movement was eventually infiltrated by federal informants, resulting in the trial of sixteen people including leading figures Jim Corbett and Reverend John Fife. The defence had a team of very committed lawyers and at the outset, they were confident that they would be able to convince the jury of the righteousness of their clients’ actions. Their approach was complicated, however, when the presiding judge, Earl H. Carroll, ruled that defence attorneys could not introduce any element of international law in their defence, including the US government’s duty to hear requests for asylum. This essentially meant that the rationale that animated the work of the sanctuary movement participants could not be submitted to the jury for consideration. All the jury would hear about was the fact that the sanctuary providers had broken laws around transporting and aiding and abetting. They would hear nothing about how the US government was violating domestic and international laws that guaranteed people the right to seek asylum and have their claims to protection heard and considered.

The result was a six-month trial characterized simultaneously by dismissiveness (in that the defenders did not imagine that they would actually be convicted, even as Judge Carroll ruled consistently against them) and moments of intense outrage, particularly around the judge’s decisions, the informants’ testimony, and the claims advanced by Attorney General Don Reno.[2]

As I encountered the doodles in Miriam Davidson’s Papers, these extreme emotions – boredom and focused fury – seemed to play out on the pages of the scrawled notes, produced daily during the trial.

Before I detail the images below, I should reveal that in the past I likely would have skimmed over these drawings very quickly, as interesting curiosities but of very little value to my analysis otherwise. Fortunately, I had the pleasure of teaching a theory and methods seminar at Carleton University this year in which PhD Candidates Sarafina Pagnotta and Sarah Hart made a number of interventions on the materiality of textual records based on their own important research on art and photographs respectively. These conversations, both in terms of possibilities and limitations of textual records as objects, alerted me to the fact that I should stop and consider the significance of these images rather than quickly glossing over them in pursuit of the textual analysis upon which I had initially embarked.

At first when I saw the drawings, I imagined Miriam Davidson, seated in court, sometimes attentive, sometimes bemused, sometimes lost in thought, and sometimes infuriated. As it turned out when I emailed Davidson about the drawings, she explained self-deprecatingly that she was “a terrible artist” and that the sketches and notes had been done by her partner David L. Jones who had also created a “plaster statue of Jesus that hung on the lamppost outside the courthouse on the day of the sentencing.”[3] As Davidson explained, “David attended the trial with me and sometimes took notes while I was out dictating a story over the phone to the editor at the Christian Science Monitor or whatever. You can see some of the notes near the doodles are in his handwriting, not mine.”[4]

Even once I knew there was a different creator (and I could better see that there was more than one set of handwriting in the records), I still found that the drawings provided a sense of passing time in a way that the textual notes alone did not (though their sheer volume certainly spoke to the length of the trial). This is critical because, as noted previously, time is an important dimension of any sanctuary experience, particularly for the people seeking refuge. In this case, sanctuary providers themselves experienced some of the anxiety, and tedium, of not knowing their fates.

In a manner akin to the analyses of graffiti left by detainees at the US immigration processing facilities on Ellis Island in New York and Angel Island in California, the sketches described here can help us imagine the passage of time and some of the emotions people experienced as they waited for circumstances to evolve. Out of hundreds of pages of notes, there are approximately 28 pages covered all or in part with sketches. Most are done with a simple ballpoint pen though in some cases, a wash appears to have been applied.

First, a sample of some of Jones’ drawings that I imagined were done out of boredom: 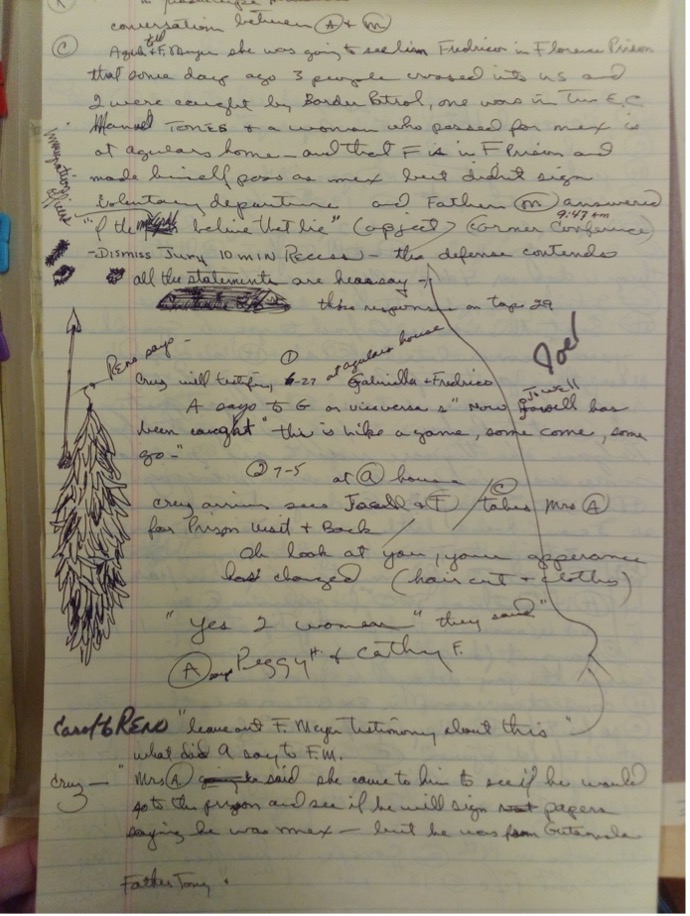 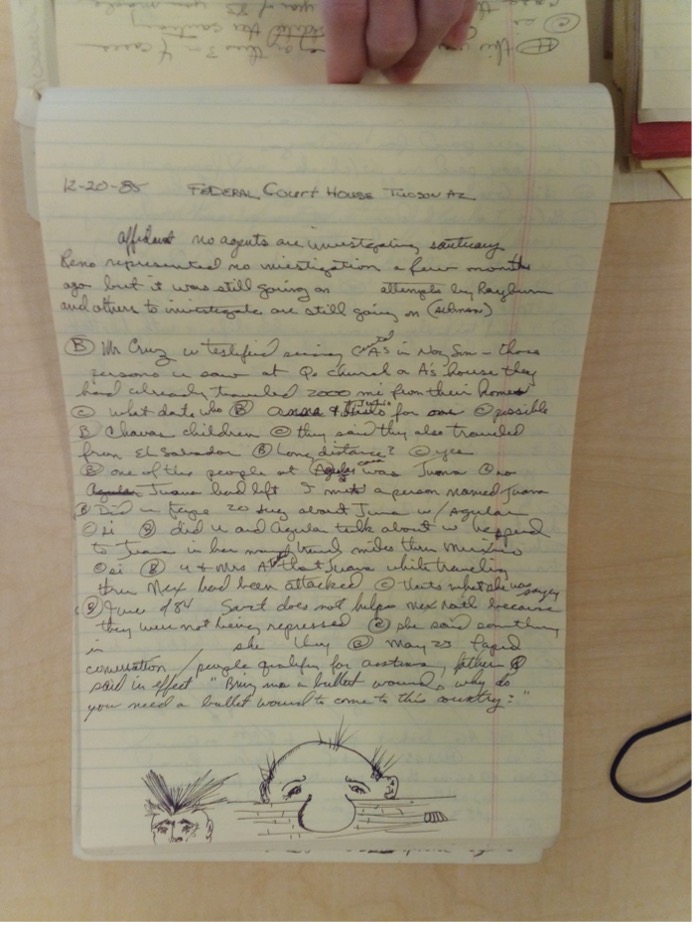 Second, a sample of drawings that I presume had more of an evidentiary, and perhaps angry, focus given the frustrations the defense team vocalized about the proceedings: 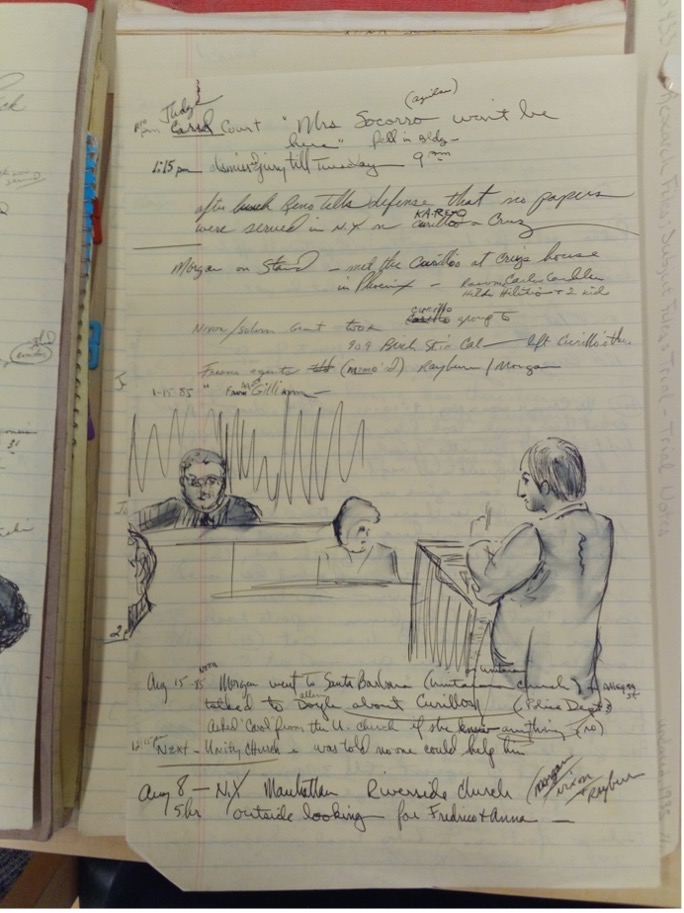 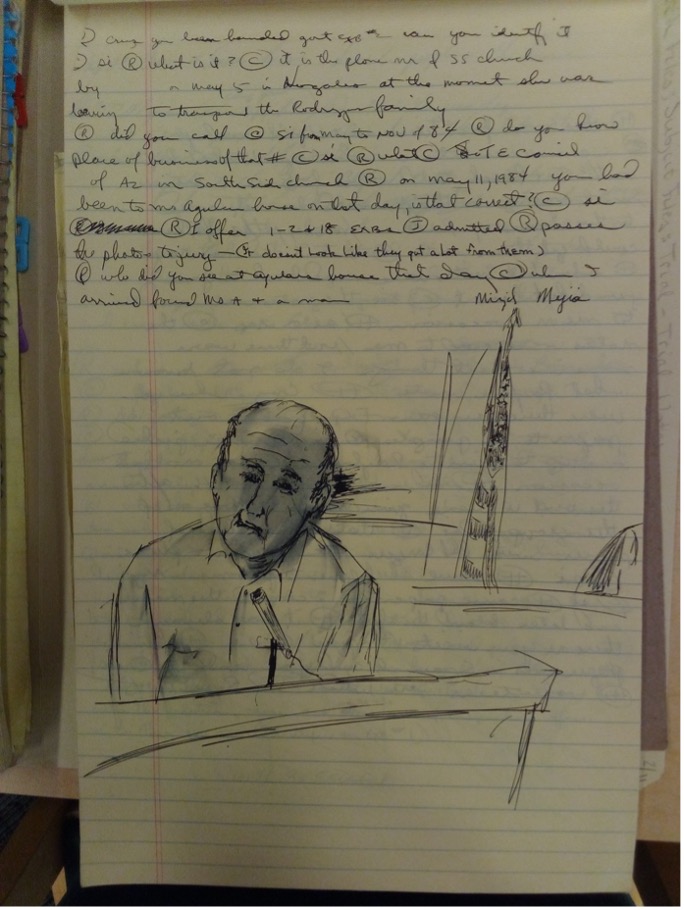 All of the sketches are a reminder that, rather than mere annotations, doodles and drawings can be a significant help for historians seeking to understand the passage of time and how it felt for those involved. In attending the sanctuary trial, and drawing as he did, David L. Jones literally sketched the passage of time and, as a result, providing rich insights for those people seeking to understand the history of sanctuary in all its dimensions.

Laura Madokoro is a member of the Active History editorial collective.

[2] For details on the sanctuary trial, in addition to Miriam Davidson’s work, see Ann Crittenden’s Sanctuary: A story of American Conscience and the Law in Collision (New York: Weidenfeld & Nicolson c1988).