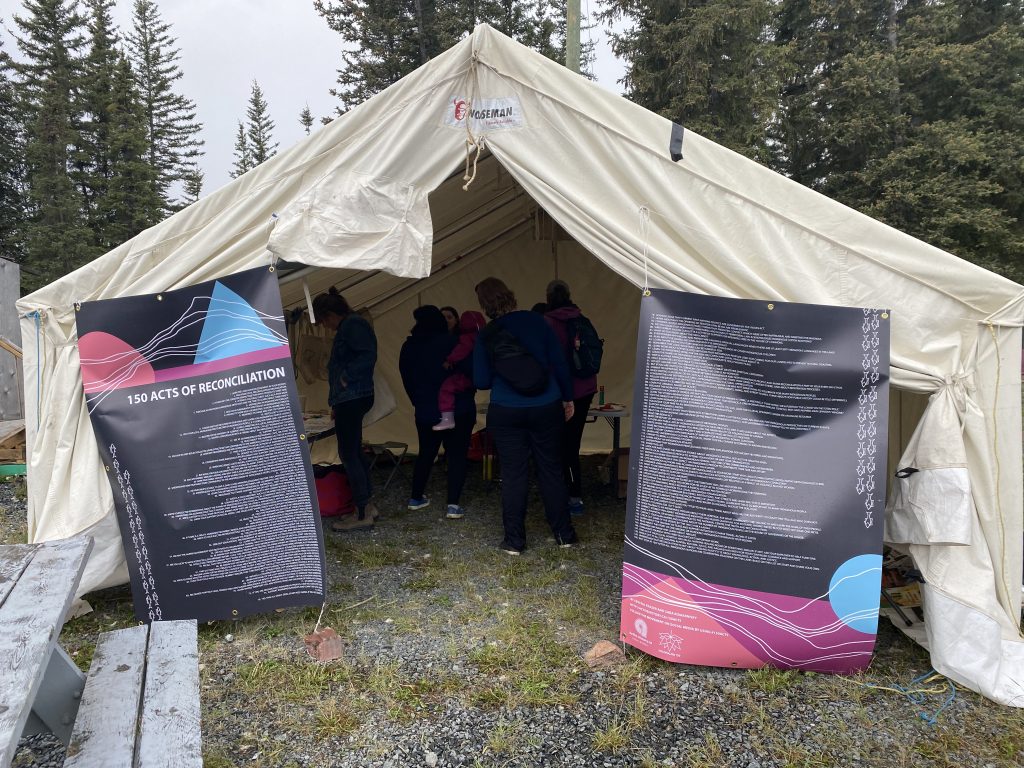 On May 27th, 2021, Tk’emlúps te Secwèpemc confirmed what Survivors and Indigenous communities had known for decades: that Indigenous children suffered untimely deaths and their bodies were sometimes buried in unmarked graves around Indian Residential Schools. It was not the experiences and statements of Survivors or the work of the TRC that brought credibility to the existence of these crime scenes but western colonial science in the form of archaeology and ground penetrating radar finally ‘proving’ what Indigenous Peoples have been saying for decades. This launched Canada into a national conversation about the effects and lasting trauma of Indian Residential Schools, what it means to be Canadian, and the ongoing nature of colonialism and white supremacy in colonial Canada.

In many ways, the news on May 27th, 2021 changed public sentiment in regards to nationalism: calls were made to #cancelCanadaDay, new energy and vigor emerged to implement another handful of the TRC’s 94 Calls to Action, governments ‘found’ millions of dollars in funding for work related to unmarked graves and student deaths at Indian Residential Schools, and even the head of the Catholic Church, Pope Francis, offered apologetic words. Even so, Canadian sentiment seemed to quickly gloss over the ongoing need for truth and jumped straight to dialogue of reconciliation. In addition, prior to this, efforts to implement the TRC’s 94 Calls to Action were abysmal, with very few calls implemented. 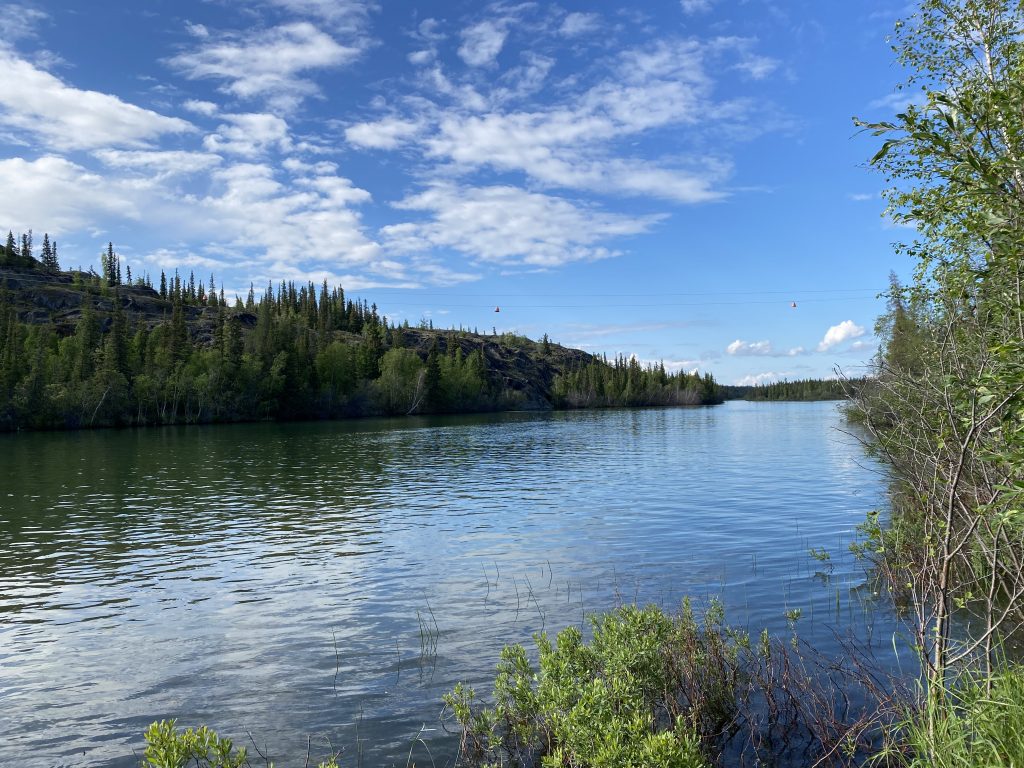 As ‘new’ knowledge emerges around the histories of Indian Residential Schools, there have been other incredibly painful and immensely important developments in Canada and North America more broadly. 150 Acts never had the opportunity to grapple with these developments, but they are so important to reckon with when advancing truth, reconciliation, and healing for Indigenous Peoples, immigrants, other racialized communities, and settler Canadians. Consider these events over the past five years: ongoing crimes around missing and murdered Indigenous woman and girls; the untimely deaths of Joyce Echaquan, Regis Korchinski-Paquet, and Chantel Moore; the firing of Puglass as attorney-general; the purchase of a pipeline by the federal government; record-high and increasing numbers of Indigenous children in ‘care’; ongoing forced sterilizations of Indigenous women; Indigenous identity fraud at academic institutions; and the acquittal of Gerald Stanley in the death of Colton Boushie, to name a few of the most egregious examples. Over time and through ongoing dialogue about 150 Acts, we have come to realize that for Indigenous, Black, and other racialized communities, the acts of reconciliation we wrote in 2017 do not always correspond to acts of refusal, resurgence, resistance, and solidarity for all those affected by and currently embedded in colonialism in Canada.

Continuing to work on 150 Acts has allowed us to engage with these developments in our presentations and workshops, use stronger language about genocide, white supremacy, and colonial violence, and bring nuance to conversations about truth and reconciliation. We often wonder: could the original 150 Acts have used stronger language? How could we have added complexity and nuance to a list of one-sentence action items? How has this work displaced or disadvantaged racialized peoples or communities?[2] How could we have done better? Or perhaps a more pertinent question: how can we do better with 150 Acts?

Act #150, “Why stop at 150?”, was designed to signal that the quest for truth and reconciliation is ongoing. Indeed, we never intended to provide a simple checklist: the 150 Acts were meant to encourage readers to develop a reconciliation practice that would become formative to their ethos. But as the authors, we took this work to heart as well. As such, and as we continue to engage with this work, we have persistent and lingering questions: who is this list for? How do we convey solidarity across shared anti-colonial, anti-racist, gender diverse, and feminist struggles? How can we find a balance between understanding and reckoning with the Truth of history while maintaining a focus on survivance[3], sovereignty, cultural resurgence, and Indigenous excellence? How can we do better as academics, teachers, parents, engaged citizens (of our respective nations), and community members? But also how do we ‘do better’ as the beneficiaries of colonialism, white privilege,[4] and dispossession of Indigenous Peoples?

These remain open questions for us. Each time we present or plan a workshop, it means a revision of the original work. And indeed, over the past five years, we have often been asked, “What’s next for 150 Acts?” We have always pushed back against any suggestion to revise or rewrite the list. Admittedly, our ideas and the list of 150 Acts represent a snapshot in time, and so much has happened since 2017. As well, our thinking has deepened as we have continued to learn and talked widely to different communities. But the idea behind 150 Acts was never that this list alone would lead to the kind of systemic and decolonial change that is needed. The list was intended to spark the kind of learning and engagement that would lead people, organizations, churches, workplaces, and social groups to change through everyday practice. We hoped to generate creativity and empowerment among readers and create understanding and connection across Indigenous and non-Indigenous Peoples in Canada.

In 2019, we worked with Gwichyà Gwich’in Elder Agnes Mitchell to better understand Indigenous concepts of reconciliation, in this case through a Dinjii Zhuh lens. Agnes provided us with “gwiizii ts’àt gwitàatsàh”[5] in Dinjii Zhuh Ginjik or “we will make it better” in English. The mindset behind “we will make it better” is one of beauty since it allows people – of all backgrounds – to take on this work in a gentle and achievable way. The pursuit for truth and reconciliation, Indigenization, and decolonization seems, at times, insurmountable as there is so much to unpack, unlearn, reorder, refuse, resist, and reconcile. But for us, the work of 150 Acts has demonstrated how truth and reconciliation can permeate our lives on a daily basis, why small acts and gestures matter, and that we can continue to have faith in our humanity. All this, despite the traumatic and genocidal policies and experiences that governments, Christian churches, and policing bodies have inflicted on Indigenous Peoples and other racialized communities.

Check out the original 150 Acts of Reconciliation, and consider purchasing a poster with art by the brilliant Lianne Marie Leda Charlie of the Wolf Clan and Tagé Cho Hudän/Big River People. The proceeds from poster sales have funded 150 Acts projects, workshops, and expenses, but also allowed us to establish an annual scholarship, the Gwiizii ts’àt gwitàatsàh Award, for First Nations, Métis, or Inuit student in any program at the University of Alberta.

Crystal Gail Fraser (she/her) is Gwichya Gwich’in (and of English/Scottish heritage) from Inuvik and Dachan Choo Gèhnjik, Northwest Territories. She is an Assistant Professor in the Department of History, Classics, and Religion and the Faculty of Native Studies at the University of Alberta. You can find Crystal on Twitter at @crystalfraser.

Sara Komarnisky (she/her) is of Ukrainian settler ancestry and grew up in Alberta. Currently, Sara is Research Chair, Health and Community, at Aurora College and an Adjunct Professor of Anthropology at the University of Alberta. You can find Sara on Twitter at @saravkomarnisky.

The University of Alberta is located in Edmonton, Alberta on Treaty 6 territory and the homeland of the Métis Nation, where Cree, Blackfoot, Dene, Saulteaux, Nakota Sioux, and other Indigenous Peoples have lived since Time Immemorial.

Aurora College is situated on the traditional territories and homeland of the Dene, Inuit and Métis Peoples of the Northwest Territories.

[1] Subsequently referred to as “Canada.”

[2] Act #85 of 150 Acts of Reconciliation is “Remember that good intentions can be harmful too.”

[3] Here we draw strength from Unanga Eve Tuck, who called for a moratorium on damage-centered research with marginalized communities to avoid a singular focus on oppression, at the expense of survivance and sovereignty. See Eve Tuck “Suspending Damage: A Letter to Communities”, Harvard Educational Review (2009).

[4] Phenotypical racism or skin tone bias is common in Canada and is derived from the long-held stereotype that Indigenous Peoples are dark skinned. Given that this form of racism is so pervasive, Indigenous Peoples who do not meet the “dark skinned” criteria can benefit from forms of white privilege that intersect with gender, class, sexual orientation, religion, and other criteria. For a familiar but foundational reading on white privilege, see: Peggy McIntosh, “Unpacking the Invisible Knapsack,” Peace and Freedom Magazine (July/August 1989).

[5] With this spelling, we acknowledge the limitations that still exist online when writing in Indigenous languages.