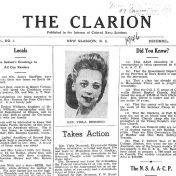 Jill Campbell-Miller Racial profiling has lately been in the news in Nova Scotia. In September, Dr. Lynn Jones, a well-known champion of civil rights and a labour leader, was stopped by police while out with friends watching deer. Someone had called the police to report “suspicious people” in the neighbourhood. To add insult to injury, Jones was stopped in a… Read more »

by Asa McKercher In 2016, Western University’s Department of History announced the establishment of a variety of graduate awards and scholarships named for Kenneth Hilborn, who had bequeathed $1 million to the university in his estate. A faculty member at Western from 1961 to 1997, Hilborn (PhD, Oxford) was of a generation where one could apparently secure tenure without having… Read more »

By Daniel Rück and Valerie Deacon According to Gregory Stanton, president of Genocide Watch, the eighth stage of genocide is denial. Perpetrators of genocides will do what they can to destroy evidence, intimidate witnesses, blame victims, block investigations, and change the narrative. No one wants to be remembered for having committed genocide, and few citizens of a country can easily… Read more »

By David Webster “Words have meaning,” CBC commentator Michael Enright declared in an editorial broadcast over the national radio network. He objected to the way one word, “genocide,” was used by the national commission of inquiry into missing and murdered Indigenous women. In this, Enright is far from alone – top media figures and publications fell over one another to… Read more »

Dan Guadagnolo Buried within Ontario’s 2019 budget is a drastic change to how the province’s publicly funded universities and colleges will receive support. Though Ontario’s post-secondary institutions are some of the most accessible in the world, the 2019 budget indicates that by 2024-2025, Ontario colleges and universities will receive 60 per cent of their public funding through yet-to-be determined performance… Read more »