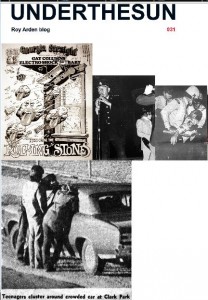 One example is artist Roy Arden’s blog, Under the Sun, a seemingly random collection of images and YouTube videos. I discovered Arden’s blog after he linked images I used in posts on my own history blog about a 1972 riot at a Rolling Stones concert and from the Battle of Ballantyne Pier, a riot during the 1935 waterfront strike in Vancouver. For me, providing context for the images is what drives many of my blog posts, so I was struck by Arden’s use of the same images with a complete absence of context, giving the viewer a relatively unmediated view of the same history. Scrolling through the rest of his blog, I found a lot of provocative historical photographs and ephemera that make it easier to appreciate just how potent such images can be on their own terms. 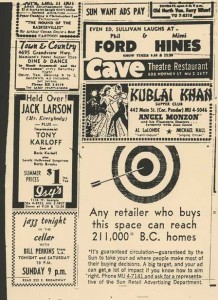 Another Vancouver artist, Michael de Courcy, runs a website featuring several online exhibitions showing pieces of a past to which he feels some personal connection. One exhibit consists of newspaper clippings containing ads for the Cellar Club, a jazz club that operated in Vancouver between 1956 and 1963. In contrast to the lack of context on Roy Arden’s blog, De Courcy writes: “Suspended as these ads were within the entertainment pages of the daily papers, the images in this archive also provide an opportunity to reflect on the mid-century pop culture context in which the Cellar’s edgy musical and theatrical offerings flourished …”

Coincidentally, I had been reading Burlesque West: Showgirls, Sex, and Sin in Postwar Vancouver (University of Toronto Press, 2009) by UBC prof Becki Ross when I came upon de Courcy’s website. Ads for the Cellar appear alongside ads for other clubs I had been reading about such as Kublai Khan, Isy’s, and the Cave, giving me additional context beyond what Ross provides in 300-plus pages of text and images. True, these newspaper ads don’t challenge or augment Ross’s interpretation, but they do make nightlife in mid-century Vancouver a little more real to me.

Lani Russwurm holds an MA in history from Simon Fraser University and runs Past Tense, a history blog about Vancouver, where he lives and works.