When you think of the Holocaust, what images immediately come to mind?  Perhaps you see the infamous Arbeit Macht Frei sign above the gated entry to Auschwitz I, emaciated bodies, crowded conditions, barracks in concentrations camps, yellow stars, victims forced to board trains, or tattoos that branded prisoners and slave labourers. For most people, images of gas chambers and of emaciated bodies of Jews, Poles, Gypsies, homosexuals and others in concentration camps like Auschwitz first come to mind when the Holocaust is mentioned.  The systematic murder of 2.25 million Jews during the “Holocaust by bullets” in present day Ukraine and Bella Russia between 1941 and 1944 is often forgotten, or simply overlooked.

These images reflect that more personal form of killing (editors note: some of these images are graphic): 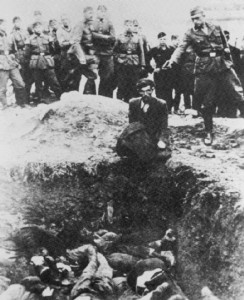 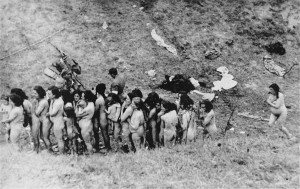 Naked Jewish women, some of whom are holding children, waiting in line for their execution on October 14th 1942 in Miczocz, Rovno. © USHMM, courtesy of Instytut Pamieci Narodowej. Published source: Klee, ernst. 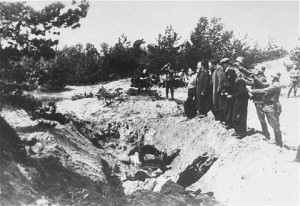 On Monday, October 4, 2010, Father Patrick Desbois, President of Yahad-in Unum and author of The Holocaust by Bullets: Uncovering the Truth Behind the Murder of 1.5 Million Jews (2008), presented at an event in Toronto, Canada, hosted by the Holocaust Education Committee of the Jewish-Christian Dialogue of Toronto and Beth Tzedec Congregation. The type of research underway on the Holocaust by bullets by his team is as active as it gets. In village after village in present-day Ukraine, they are working with the public. Interviews with local witnesses more than 60 years after the fact provide harrowing accounts of the “Holocaust by bullets.” Using ballistic evidence to locate mass grave sites with the help of local witnesses, Father Patrick Desbois and others have revealed more on this unknown chapter of Holocaust history. Since 2004, they have interviewed over 800 eyewitnesses and identified more than 900 mass graves in Ukraine and Belarus. However, witnesses are dying and time is running out to capture their stories. 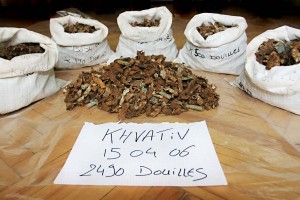 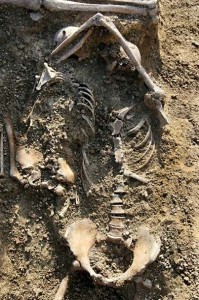 As their testimonies explain, after Operation Barbarossa, the code name for the German attack on the Soviet Union in June of 1941, special mobile extermination squads were organized to kill Jews by bullets in the former Russian occupied zone. Jews were rounded up in town ghettos and told they were to be relocated, only to be taken to the woods, to be shot. Their bodies were buried in mass graves.

Here is a map representing a sampling of the massacre sites: 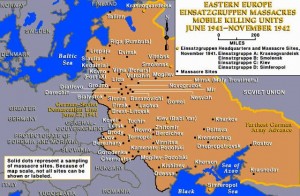 The Nazis later determined it was more cost effective to kill Jews and other groups by inserting Zyclone B gas in large-scale gas chambers. However, in general, the public is more familiar with the gas chamber method of killing.

Last fall, I had the opportunity to travel to the Ukraine. I spent time doing research on the Holocaust by Bullets and interviewed witnesses in Rovno and Berezne. On August 25, 1942, 3,680 Jews were marched out of the Berezne ghetto and forced to help dig three mass grave pits, each 20 metres in length. They were then shot to death in rows of five. According to witnesses, the pits moved for three days, and blood leaked through the ground. Many of the children were simply thrown into the pits and pushed down so as not to waste a bullet. Some Ukrainians were forced to assist in the killings. Others willingly did so. 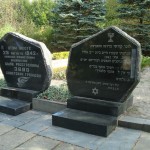 A number of Jews from Berezne were killed in the major city centre of Rovno, a 45 minute car ride away today. The total population of Rovno in 1939 was approximately 40,000, 30,000 of which were Jews. As witnesses explained and I saw firsthand, 17,500 people were killed by bullets at the mass grave site in Rovno, and approximately another 5,000 were thrown into a big stone quarry pit in Kostopil. The memorial area where the 17,500 were buried in mass pits in Rovno is overwhelming. It is very large and there are dozens of plaques with some of the names of those killed. Symbolic footprints commemorate their forced descent to their deaths. 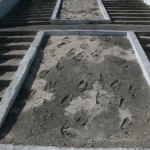 In spite of the Einsatzgruppen Nuremberg trials from 1947 to 1948, material evidence (bullets and archival photos), accounts of local witnesses, and testimonies by rare survivors, the Holocaust by bullets in Berezne and Rovno, like in the Ukraine at large, remains shrouded in secrecy. It is not discussed, and rarely acknowledged in public. The active historical investigative work under way by Father Desbois and others is challenging that silence, and educating people around the world. The next time you read or hear the world “Holocaust,” I encourage you to picture bullets in addition to concentration camps and emaciated bodies. After all, 2.25 million out of the 6 million Jews who were murdered during the Shoah were killed by bullets. 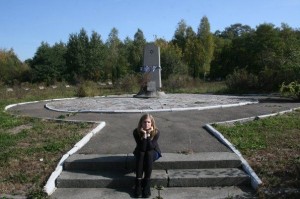