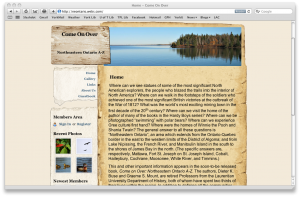 When up in the Sudbury and Manitoulin areas for a quick research trip in mid-September, driving several hundred kilometres, I became well-acquainted with CBC Sudbury. On Morning North, there was a regular program by two Laurentian University professors conducting research for their upcoming book Come on Over: Northeastern Ontario A-Z. In what sounds like a cross between an encyclopedia and a guidebook, the community really seemed engaged in its production.

Professors Dieter K. Buse, a German historian (who has also done work on Sudbury labour), and Graeme S. Mount, a Canadian historian, joined listeners and Morning North presenter Markus Schwabe, in taking calls from the audience. There was a ton of variety, with calls coming from all over the Sudbury and Algoma districts. What was the link between the Haileybury Comets (then a tiny town of about 2,000 people) and the Montreal Canadians, one caller asked? Was there a link between the latter’s logo (a H in a C) or was it a coincidence? The story is fairly complicated, as this other link indicates. The franchise was certainly sold to Montreal, although the logo simply refers to le Club de hockey Canadien. It certainly ignited my interest.

The book itself will include “anecdotes provided by CBC listeners, people who know their own communities,” involving a collaborative process between community and historian. This will certainly be a diverse book, as their website shows:

Where can we see statues of some of the most significant North American explorers, the people who blazed the trails into the interior of North America? Where can we walk in the footsteps of the soldiers who achieved one of the most significant British victories at the outbreak of the War of 1812? What was the world’s most exciting mining town in the first decade of the 20th century? Where can we visit the home of the author of many of the books in the Hardy Boys series? Where can we be photographed “swimming” with polar bears? Where can we experience Cree culture first hand? Where were the homes of Winnie the Pooh and Shania Twain? The general answer to all these questions is “Northeastern Ontario”, an area which extends from the Ontario-Quebec border in the east to the western limits of the District of Algoma; and from Lake Nipissing, the French River, and Manitoulin Island in the south to the shores of James Bay in the north. (The specific answers are, respectively, Mattawa, Fort St. Joseph on St. Joseph Island, Cobalt, Haileybury, Cochrane, Moosonee, White River, and Timmins.)

Their website also includes a picture gallery and a guestbook where viewers can interact with the two authors. This all helps to provide a sort of historical community, which vividly exists (as my own oral interviews demonstrated), and will certainly be enhanced by the production of this very important book. The idea of a “call-in” show for historians is great – truly a form of ‘active history.’ It’s also a great sell for the CBC, at least to this aspiring historian!