Torontonians go to the polls today to vote in the city’s municipal election.  Transportation, and plans for transit in particular, has been a prominent theme during the long election race.  Much of the debate has focused on whether the city should stick with Transit City (a plan already started that will criss-cross the metropolis with numerous light rail lines) or substitute the scheme with more subways. 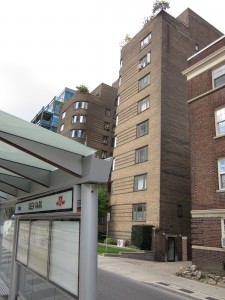 One of the more controversial transit infrastructure projects of the last decade is the St. Clair Avenue West Transit Improvement Project, which has replaced an already existing but physically-deteriorating streetcar line with a rebuilt line traveling along its own lane.  Members of the local community, especially businesses, complained that the project would hurt the area, and even unsuccessfully tried to stop it in court.  Perhaps because of the controversy of the line, another interesting part of the project has been relatively overlooked.  The streetcar shelters for the new right-of-way include a series of interpretive panels: a fascinating example of one city using community involvement to collect and tell stories about a locality.

Back in 2004 and 2005, the city held a series of community mapping meetings.  The purpose of these workshops was for citizens to provide their knowledge of stories past and present that relate to specific places along the streetcar route, in order to create interpretive panels as part of the larger St. Clair West Transit Improvement Project.  The goal of these workshops was to “give voice” to residents.

In 2006, students at Ryerson University’s Urban and Regional Planning program, under the direction of professor Nik Luka, became heavily involved in the project and created a comprehensive report with recommendations to make the plaques reality. “In urban design,” the report noted, “the best sources of information about a place – in addition to the place itself – are the people who use it on a regular basis.”  Throughout the process, there was awareness that community members hold memories that are not well known to others.  With information provided at these meetings, project members then further researched the stories and themes through primary and secondary sources.  A process of community consultation has continued to the present.  Sample plaques are now installed, but the project website and information displayed in the shelters still ask for community input before finalized panels are created. 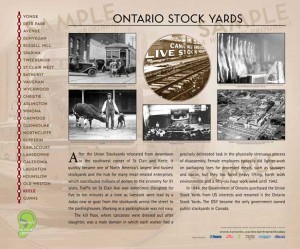 So, what stories do the streetcar panels tell?  The panels deal with a number of themes, including aspects of urbanization and industrialization, cultural developments, the natural environment, and the numerous ethnic communities that have made the area home.  Interestingly, the Ryerson student report acknowledged that “no singular ‘truths’” exist in understanding the place of St. Clair West, as “people living in the districts of … the corridor have had different experiences, and what is significant for one user may not be the case for the other.”

Comparing ideas put forth from the community mapping workshops with current panel plans suggests some negative aspects of the avenue’s past have been excluded.  Despite a recommendation to include a panel on the story of the right-of-way project itself, no panels directly discuss the highly-controversial project.  A 1995 subway crash that killed 3 people – a sad but important memory for many residents in the area and suggested at the workshops – is not mentioned in any panels (probably not surprising for panels designed for people waiting for transit). 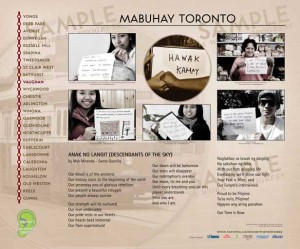 Some panel themes in certain locations have changed since the 2004-2005 mapping meetings.  For example, a panel at Vaughan Road now celebrates the prominent Filippino community in the area (left) instead of a second panel on the Spadina Expressway.  A panel on the increasing Latin American community, not their Hungarian counterparts as planned in 2004-2005, will be at Arlington Avenue.  The Winona Drive westbound panel will discuss a prominent family, former pool, and racetrack, rather than African Canadians in Toronto.

A fascinating aspect of the interpretive panels, as places of memory, is the way in which they are seamlessly a part of that which they are meant to interpret: the everyday life of St Clair West.  The student report observes that “when interventions are meant to ‘give voice’ to place history and identity, it is wise to avoid making them ‘stand-alone’ items such as plaques impaled on poles”.  Incorporating panels within the design of transit shelters allows these devices to be successfully woven into the urban fabric.

This is part of the greater purpose of the panels as a contribution to the improved public space of the street and its transit shelters.  Based on the theory of triangulation by American sociologist William Whyte, who stressed the importance of conversation between strangers stimulated by a source of discussion, those involved in the project hope the panels will create a more positive, friendly atmosphere by prompting conversation by transit riders and pedestrians.

As someone who lives near St. Clair Avenue and uses the new streetcar right-of-way quite often, I have not yet engaged in a conversation with a stranger based on the plaques.  Yet I am not alone in the fact that the panels have made me think about the past and present place of my surroundings and, as a result, have improved my daily experience.