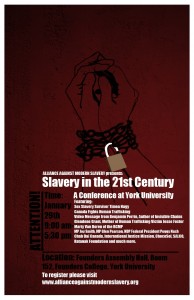 It is our pleasure to announce the official launch of a new NGO – Alliance Against Modern Slavery (AAMS) – in Toronto on January 28-29, 2011. AAMS is incorporated in Canada on a not-for -profit basis as “Canadians Against Slavery/Canadiens Contre l’Esclavage”, and dedicated to raising awareness about and combating modern slavery, a practice which affects 27 million lives worldwide.

Get your tickets now for an inspiring, uplifting benefit concert for freedom on January 28 (7pm-10 pm) in the beautiful Sandra Faire and Ivan Fecan Theatre at York University where So You Think You Can Dance Canada was filmed. The freedom concert features motivational speaker Roger Cram as MC, TED Speaker and AAMS board member Kevin Bales who is one of the world’s leading experts on modern slavery, Survivor Natasha Falle, Glendene Grant (Mother of Missing Human Trafficking Victim Jessie Foster), Actress Singer Songwriter Kate Todd, Guitar Player Jeff Gunn and Janelle Belgrave of Peace Concept, Samba Elegua Drummers, an Anti-Slavery Art Auction, the Fashion Studio 7 filming crew, and much more.

We hope you can join us for two wonderful events to mark the launch of AAMS!