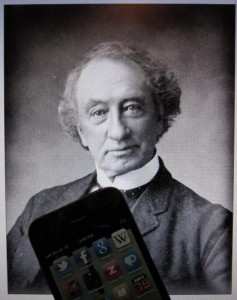 Since starting up in 2006, Twitter has quickly become one of the most popular forms of social media.  Twitter is a website used to broadcast text messages – known as “tweets” – in 140 characters or less.  It has over 200 million accounts, and its users write more than 65 million tweets a day.  Twitter provides an opportunity for organizations, companies, individuals, and websites (like ActiveHistory.ca) to get their message out to wider publics.

But living Canadians aren’t the only ones taking advantage of Twitter.  Dead Canadians of historical prominence are too.

During last fall’s Toronto mayoral race, the local media and the Twitterverse were a flutter over the tweets of William Lyon Mackenzie, known on Twitter as @rebelmayor.  Mackenzie is most widely remembered for leading the failed 1837 Upper Canada Rebellion, but he also served as Toronto’s first mayor in 1834.  According to his Twitter account, Mackenzie was “back & pissed & running for Toronto mayor in 2010.”

Mackenzie was publisher of the Colonial Advocate during the 1820s and 1830s. He used the newspaper – that dominant nineteenth-century media form – to rail against the Family Compact and advance his beliefs in democracy and liberalism.  So it’s not surprising that he would use Twitter to promote his political agenda.  Except that he died in 1861.

Days after the election, @rebelmayor revealed his true identity.  Turns out @rebelmayor wasn’t the real Mackenzie.  Rather, it was Shawn Micallef, avid tweeter (@shawnmicallef), author of Stroll: Psychogeographic Walking Tours of Toronto (2010), and senior editor of Spacing magazine.  When asked by the Globe and Mail what motivated him to take up the e-persona of Toronto’s first mayor, Micallef said that he “felt like William Lyon Mackenzie seemed to embody the angry electorate. It was like his time to come back was now. He could channel the anger of Torontonians, just as he did in 1837.”

All of Canada’s dead prime ministers also have Twitter accounts, from Sir John A. Macdonald (@PMJAMacdonald) to Pierre Trudeau (@PierreTrudeau or @P_Trudeau).  Predictably, banter between them heated up during the recent federal election, under the hashtag #deadPMattackads.

These former leaders comment on current political issues from their own perspective.  Following the recent announcement by Stephen Harper that embattled Conservative MP Bev Oda would continue to serve as Minister of International Cooperation, R.B. Bennett (@OlBonfire), Conservative prime minister from 1930 to 1935, tweeted: “Bev Oda is still in cabinet? Oh well, I kept Manion around, so who am I to judge” (Robert James Manion was Bennett’s Minister of Railways and Canals).  Mackenzie King (@wlmk) has taken a different approach, tweeting selections from his once private but now public diary.  He is followed by current Liberal MPs Justin Trudeau (@justinpjtrudeau) and Carolyn Bennett (@Carolyn_Bennett), themselves active tweeters.

Some dead Canadians whose historical prominence came outside of politics also use Twitter.  Samuel de Champlain, seventeenth-century navigator and founder of New France, tweets under the username @Sam_D_Champlain – in French, of course.  It’s probably not surprising that Marshall McLuhan (@marshallmcluhan), media theorist and prophet of the electronic Global Village, uses Twitter to promote his own work.  Stephen Leacock (@Leacocklapses), a McGill political economist remembered more for his humour writing, is a very active tweeter who quotes from his own work and other thinkers.  But others, like Frederick Banting, Terry Fox, Billy Bishop, Sanford Fleming, and Lucy Maud Montgomery, haven’t picked up the Twitter habit.

What motivates these historical figures to use Twitter?  J.S. Woodsworth (@JSWoodsworthCCF), social activist and first leader of the CCF during the early 1930s, began to tweet when he noticed that the debate between dead political figures lacked a third-party perspective.  When I asked why he tweets, he responded that “[p]eople tend not to remember me but I made quite a contribution to Canada.”  He followed that he’s “more relevant now considering the results of #elexn41 [the recent federal election].”  Sir John A. gave a similar response: “Keeping history alive and relevant is my reason for tweeting. As a ‘man of the people’ this medium suits me….thanks for caring.”

Alright.  It’s a safe bet to assume that these dead individuals aren’t themselves doing the tweeting.  Instead, Twitter offers a unique and often entertaining way to garner interest in the country’s history, especially to younger, tweet-savvy Canadians.  In some ways, these Twitter accounts are the virtual counterpart of historical pageants and reenactments, as people today find those of the past – both “elites” and “ordinary people” – so captivating that they temporarily perform the assumed persona of these deceased individuals.  Yet J.S. Woodsworth’s reflections illustrate that this practice also has relevance to today’s political debates.  If Sir John A. has Twitter, why don’t you?