It is 24 April, and although some Canadians have been mowing grass for weeks the spring plants on Prince Edward Island are only beginning to overcome the cold nights and occasional flurries that visit this island in April. Still, this is an early spring by historical accounts. On this day in 1879, John MacEachern recorded the following diary entry in Rice Point:

“Ice drifting out of Harbour and Nine Mile Creek, boats can get to Town now, a Ltr [boat] from East Point [arrived] back at Governors Island Tuesday.”

The day before he had recorded a similar view from the farm:

Thirteen years earlier the ice was more fluid, moving along the South Shore of the Island on 18-19 April until there was finally “no ice in sight” on the 23rd.  This did not mean winter had passed; MacEachern noted “frosty ground, hard all day,” on 24 April, and frost deep enough to prevent stumping and ploughing all that week.  Usually we think of historical weather reports and almanacs as about as exciting as reading the phone book, but diary entries like these reveal dramatic changes in our environment and our climate when we read them in real time.

Spring 2012 has already set several record high temperatures.  The last snow banks receded from the hedgerows weeks ago and the Northumberland Strait, the body of water that contained unbroken ice on this day in the nineteenth century has been ice-free for well over a month.  People have short memories, and although the effects of climate change are becoming more obvious on a year-to-year basis, comparing our current weather with data from 1.5 centuries ago suggests we are living in an eerily different climate.

According to Environment Canada’s Climate Archive, the average temperature between 1 March and this date in 1879 was negative 1.8.  This year it has averaged positive 1.8.  The average daily highs are even more striking, jumping from 2 degrees in 1879 to 6.7 in 2012.  A difference of around 4 degrees might not seem like much global warming over such a long span, but to farmers like John MacEachern the effects on daily life and the surrounding environment today would be obvious. 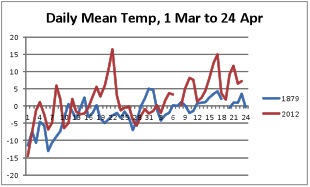 Scientists who examine modern weather station data work primarily with a small number of relatively recently established stations, and they recognize the importance of volunteer reporting to ensure an accurate and representative data set (Yukon farmer Hugh Bradley has recorded the weather twice a day since 1954).  Farm diaries are perhaps the largest pre-twentieth century volunteer weather database, and historians who at one time may have glanced over the mundane repetition of daily weather reports are beginning to explore journals and diaries for their phenological, or seasonal indicator, data (Phenology is the study of how plants and animals develop with seasons and cycles.). Liza Piper was one of the first historians to systematically examine Canadian climate through farm diaries.  Other projects such as the Thousand Eyes program in Nova Scotia built on work by Adam Fenech, Don MacIver, Heather Auld, and Stu Beal and analysed the early twentieth century phenological calendar for native plants. Naturalists who study Aldo Leopold’s phenology argue that spring events are coming two to three weeks earlier in Wisconsin today.

Real Time Farming offers a new way to digest historical weather observations – in real time!  The journals of farmer-naturalist Francis Bain are replete with phenology, and several of his climate observations have been transcribed on the blog.  Farmers recorded a range of everyday phenological observations such as the flocks of migrating Canada Geese noted by John MacEachern on 8 April, 1879, or 19 March, 1866; the depth and consistency of snow in the woods on 5 April 1866 and 17 March 1879; and the constant references to travel conditions on, and hence the thickness of, river and sea ice.  Similar observations of ice travel conditions and the first sailing of ferries and other boats were routinely recorded in newspapers as well.

Mussel mud digging was another routinely generated climate record found in farm diaries.  The location and stability of the ice was critical information for farmers; the information also provides a serendipitous record of interest to climate historians.  Most farmers recorded the date that they set their heavy and cumbersome mud digging machines out on the ice and the date they pulled them back in.  On 18 March Basil McNeill figured “the hauling is over for this year” due to a mild spell and spring freshets that weakened the roads and ice.  The mild weather proved temporary, and a cold “Nor West Wind” mobilized the diggers for another two weeks. In the first week of April, McNeill recorded a massive snow storm, and to his surprise, weather that was “cold for the time of year” meant one of his neighbours continued “hauling mud yet.” Roderick Munn’s record of mussel mud digging provides a history of the ice conditions on the Hillsborough River and a snapshot of coldest winters throughout the 1880s.