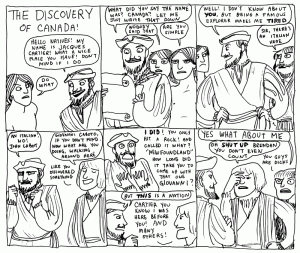 "The Discovery of Canada" by Kate Beaton (www.harkavagrant.com)

Historians of Canada specifically, and academics generally, have found themselves of late at the business end of some harsh criticisms.  To believe the editorials in major newspapers, academics write about obscure topics for the benefit of a small handful of other academics; we find students and teaching to be a distraction from our esoteric research projects; and we have no qualms about abdicating our public responsibility, even though most of us are paid from the public purse.  Based on these kinds of charges, it is no surprise that many Canadians are calling for reform in the university system.  But what about demanding more of Canadians themselves?

This blog has done much to demonstrate the deep interest in public engagement felt by historians of all disciplines (perhaps specifically in Canada) and critics should take note.  Too often, those taking pot-shots at historians are themselves not interested enough in history to move beyond arguments drawn from the lowest hanging fruit.  For example, David Frum recently castigated an issue of the Canadian Historical Review by listing only the titles of the articles (though he did demonstrate his credentials by almost spelling our first Prime Minister’s name correctly).  In other cases, the field is criticized in useful ways that reflect the concerns of historians and administrators.  Paul Martin is right to emphasize the need for more content on Aboriginal history in elementary and high school.  What many critics might not realize, however, is that few are harder on historians than historians.  Those of us early in our careers (taking our cues from equally concerned senior scholars) are willing and eager to address shortcomings in the curricula, participate in public events, and make our research accessible to the widest possible audience.  The growth of digital history and open access (not to mention the rise of environmental history) has facilitated the sharing of information in ways that reflect the inherent desire among historians to influence public opinion and public policy.

To put it simply, many historians are doing whatever possible to make our work publicly accessible and engaging.  This isn’t to suggest that we don’t fall into academic gibberish or occasionally engage in inside baseball, but it might be time to address another (equally troubling) question – what if Canadian citizens aren’t interested in the past?  Before I go down that rabbit hole, a quick comparison: several very successful books on Canadian history (or topics generally held to be of interest among Canadians) by American historians have been published in the United States.  Alan Taylor recently published an excellent study on the War of 1812; David Hackett Fischer offered his audience a sweeping view of Champlain and the founding of Quebec; and John Mack Faragher provided a nuanced and incisive account of the Acadian Deportation (from their “American homeland”, no less).  Historians in the United States win Pulitzer Prizes, their books can be found on the shelves at Chapters, and many (such as Jill Lepore and Gordon Wood) write regularly for major magazines.  These historians aren’t better qualified, smarter, or (necessarily) better writers than their Canadian counterparts.  The difference, in my mind, is that they have a more eager audience. 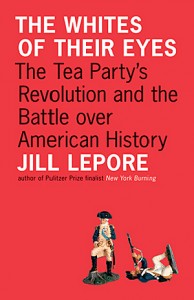 The Whites of Their Eyes: The Tea Party’s Revolution and the Battle over American History (2010) by Jill Lepore

Take for example the rise of the Tea Party.  Disregarding their troubling political views, these engaged citizens are rooted in an idea of the past – the importance of the American Revolution, the ideals of the founding fathers, and the desire to return to the “true” American spirit.  Aware of this “use and abuse” of history, Harvard’s Jill Lepore offered a readable corrective in the award-winning The Whites of Their Eyes: The Tea Party’s Revolution and the Battle over American History (2010).  The success of this book, and others, reflects not only good history writing (by authors) but also good history reading (by citizens).  The same is true of the books by Alan Taylor and David Hackett Fischer (who in 2011 was invited to give the Creighton Lecture at the University of Toronto).

If historians in Canada don’t enjoy the same kind of public success, is it necessarily the historians’ fault?  One would think that the rise of the Occupy Movement might have engendered greater interest in the history of social movements and public resistance beyond the (useful and influential) works of Naomi Klein.  For instance, in Vancouver (the home of Adbusters and, consequently, the intellectual birthplace of the Occupy Movement) there is not a single copy of Ian McKay’s recent Reasoning Otherwise: Leftists and the People’s Enlightenment in Canada (2008) available in any Chapters within a one hundred kilometre radius.  And I doubt that’s because they’re all sold out.

Despite these discouraging signs, I don’t believe that Canadians are uninterested in their history.  I also don’t believe that Canadian historians are unable, unwilling, or uninterested in reaching a wider audience.  But something is obviously amiss.  It is time to stop laying blame and start working toward connecting the Canadian public to the historians who are doing their very best to understand and explain the past for the benefit of all citizens.

Jeffers Lennox is a SSHRC Postdoctoral Fellow at the University of British Columbia.  His research interests focus on how geographic knowledge influenced political and cultural relations among British, French, and Native groups in early North America and the Atlantic World.  His blog is www.jefferslennox.com

3 thoughts on “The Public’s Role in Active History”