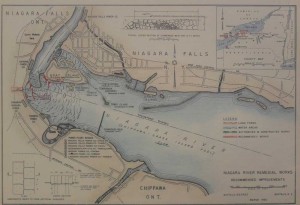 Nik Wallenda’s impending and controversial tightrope walk across Niagara Falls, set for June 15, is just the most recent in a long line of such spectacles (e.g. actually going over the falls!) at the iconic cataract. Given the banality of the carnivalesque at the Niagara Falls – just think of circus-style attractions –  it has often interpreted as a touchstone of cultural and social history, ranging from the epitome of the North American natural sublime in past centuries, to the cradle of electricity since the late 19th century, honeymoon central since the mid-20th century, and then serving as a symbol of environmental degradation (Love Canal) in more recent decades.

But I would argue that what is going on underneath Niagara Falls, is much more intriguing, and culturally revealing, if not as made-for-TV dramatic as a tightrope walk. Ontario Power Generation, one of the successor organizations to Ontario Hydro, is set to finish a massive 10.4 km mega-tunnel in 2013 which will take water from above the cataract, funnel it underneath the community of Niagara Falls, Ontario to the Sir Adam Beck powerhouses downstream. But this tunnel is nothing new, as it joins similar diversion tunnels and conduits that were built throughout the 20th century  (Canadian Geographic recently featured this tunnel’s construction, including a map of the past and present tunnels, in its April 2012 issue). The soon-to-be-completed tunnel is part of a massive and historic hydro-electric production landscape in which water falling down the Niagara escarpment has been diverted on both sides of the border in order to generate power.

Concerns about balancing the benefits of hydro power (and the industrial development that tends to accompany it) with the public’s concern for the natural appeal (and tourist dollars, from the state’s perspective) of the falls have been ongoing since the turn of the 20th century. Public pressure led to some diversion restrictions, but other forces (i.e. government and industry) pushing for increased diversions got their way more often than not. Various transnational schemes were forwarded that tried to achieve both aims: simultaneously divert water and maintain the scenic spectacle of the cataract. While this may sound contradictory, such plans formed the basis for the 1950 Canadian-American Niagara treaty between Canada and the United States.

Under the terms of this bilateral agreement, a control weir was built above the waterfalls, water diverted into newly-constructed tunnels, and the flanks and river bed leading up to the actual falls modified and manipulated so that the “impression of volume” would be maintained despite the massive amounts of water that no longer crashed over the precipice (see attached pictures). It was about making less water look like more in order to retain the “natural” appearance of the Falls. This had included the development of a special “telecolorimeter” to test for the desired “greenish-blue” colour of the cascading water. The remedial works were also intended to reduce “spray problems,” as excessive mist was scaring off visitors to the tunnels behind Table Rock. This all speaks to the commodification of the Niagara experience, a process that was intertwined with the other tourist trappings prevalent at Niagara Falls: nature should be sanitized, made predictable and orderly, and packaged for easy consumption.

Because of the treaty stipulations, 2/3 of the water of the Niagara River was legally diverted to the hydro plants, rather than going over the falls, during non-tourist hours (8 a.m. to 10 p.m. from April to mid-September, and 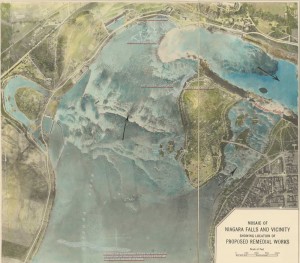 Mosaic of Niagara Fall and Vicinity

from 8 a.m. to 8 p.m. during the fall). The various governments spoke of the cataract as if it were a water faucet to be turned on and off according to aesthetic whim; indeed, Niagara Falls is essentially treated like a tap, engineered to serve the power plants. This may be disheartening, even shocking, to those who revel in Niagara’s glory. The history of Niagara Falls power and beauty development indicates that “conservation” is a contested and fluid concept, with varying motives and results. It certainly is a testament to past governmental and planners urges to treat the environment as something to be controlled and dominated. It shows that, even at a place as iconic and revered as Niagara Falls, such considerations take a backseat to progress and industry.

However, I also have not told the whole story. Canada and the U.S. further conspired in the 1960s and 1970s to increase the amount of water that could be diverted away from the falls, and even went as far as to shut off the American Falls for a period of time to explore renovating its rock face and talus. But public opposition played a strong role in dissuading many of the further “improvements” – indicating the power, forgive the pun, which such opposition can have. Furthermore, one could ask what, outside of the subjective loss of scenic grandeur, are the environmental drawbacks of plumbing Niagara for hydro-electricity? Hydro power is generally more environmentally friendly than other standard forms of mass energy production, with the major exception of the ecological impacts of reworking river and water ecosystems that hydro dams usually entail (e.g. St. Lawrence, Columbia, and Northern Quebec projects). But at Niagara, the falls act as the dam, and no flooding or major reorganization of watershed ecology has been necessary.

Nonetheless, treating Niagara like a tap seems wrong to me, and there are surely consequences for attempting to have one’s cake and eat it, too – or to have one’s power and “natural” beauty, too – even if they are not immediately apparent. At the very least, the modern history of the Niagara Falls relays a complicated story that should give us pause when it comes to conceptualizing natural beauty and natural resources.

One thought on “Above and Below: Manipulating the Niagara Waterscape”