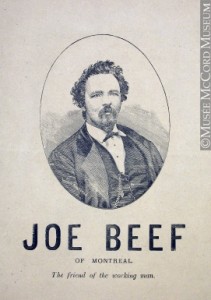 As countless Canadian undergraduates have learned after reading Peter DeLottinville’s classic 1982 article, “Joe Beef of Montreal: Working-Class Culture and the Tavern, 1869-1889,” Joe Beef’s Canteen was more than just your ordinary tavern. Described as the “Great House of Vulgar People” by its larger-than-life proprietor Charles McKiernan – or Joe Beef as he was popularly known – a nineteenth century visitor to this ramshackle Montreal institution would likely have seen a brown bear named Tom drinking ale in the corner, two human skeletons hanging behind the bar, and piece of beef that had caused the death-by-choking of an unfortunate customer on display for all to see. For middle class Montrealers, it was a source of drunkenness, criminality and moral hazard. But, as DeLottinville argues, McKiernan’s working class patrons saw Joe Beef’s Canteen as more than just a place to find food, alcohol and sociability. McKiernan’s support for the unemployed, hungry, and sick – as well as for striking workers – saw the tavern become a kind of makeshift safety net for Montreal’s workers during hard times and, partly as a result of this function, a “stronghold of working class values and culture.”[1]

Although the recently published The Art of Living According to Joe Beef: A Cookbook of Sorts (2011) begins with selections from DeLottinville’s article – albeit with the discussions of working-class politics and culture noticeably absent – it quickly becomes clear that the form of living described within would be much more recognizable to the educated leisure class that makes up today’s ‘foodie’ universe than the original Joe Beef or his clientele of “sailors and longshoremen, unemployed men and petty thieves.”[2] Written by the founders of contemporary Montreal restaurant Joe Beef – which has been described by celebrity chef and tastemaker David Chang as his “favorite restaurant in the world” – the ‘cookbook’ establishes its distance from this world of unskilled labourers and thieves by presenting the reader with the decadent “Fois Gras Parfait with Madeira Jelly” as its first recipe and by including an entire chapter dedicated to fine French wines.

For me at least, this led to two connected questions: why are the restaurant and the cookbook alike named after this (in)famous character from the rough world of Montreal’s working-class history and, more importantly, what does this tell us about the current, and very strange, moment in food culture? As it turns out, this surprisingly lively, funny, beautiful and thought-provoking book provides a fascinating glimpse into the way that food traditions are invented and sustained and, in the process, reinvents Montreal as one of the world’s top culinary destinations.

The most immediately striking thing about The Art of Living According to Joe Beef is its almost manic eclecticism. In addition to the expected recipes, it also includes everything from a short essay on the history of food in Quebec, a PEI travelogue, instructions on how to build a restaurant scale smoker from scratch (with technical drawings), a list of (mostly crackpot) food theories (!), instructions for putting together a fake Scandinavian smorgasbord, detailed descriptions of the best train routes in Canada, instructions for “building a garden in a crack den” and I can’t even finish listing what else. Oh yeah, “winemaker questionnaires” and instructions for making your own absinthe are also included.

But perhaps more than most cookbooks, The Art of Living According to Joe Beef is self-consciously grounded in history. In addition to including an essay titled “The Builders, the Brewers, the Bankers, and the Gangsters: A Brief History of Eating in Montreal”, an essay on the nostalgic romance of rail travel in Canada, and Delottinville’s essay, the recipes themselves are interspersed amongst old maps, train schedules, historical photographs, old menus, archival documents, drawings, and postcards. From the beginning, restaurant co-founder David McMillan is introduced to the reader as a gregarious history buff who, from his position behind the bar, tells stories – “You know who else had a good Bordeaux list? Samuel de Champlain, on his boat, over 350 years ago…” – which are apparently lubricated often by more than one bottle of quality French wine. As he tells the reader at one point, with a wink and a nod and a bracketed aside: “Please forgive any embellishments. They seem quite natural when accompanied by dramatic hand waving and swearing: I’m a bar storyteller, remember?”[3]

To this end, McMillan’s history of Montreal’s culinary traditions reads like a series of tall-tales and campfire stories. Instead of the biggest fish ever caught or the most harrowing escape from an angry bear, it’s built on exaggerations about what gives Montreal its unique culinary identity. Apparently, for instance, the restaurant’s namesake “ran the old port of Montreal like the fictionalized Bill the Butcher ran the Five Points in Gangs of New York” and the old port, itself, “was built by men who ate oysters by the barrel, a trait that was passed down through the old families of the builders, brewers, bankers, and gangsters.”[4]

It should come as no surprise, then, that the story told of Montreal’s culinary tradition is a controversial one grounded in a sweeping but highly selective vision of Montreal’s history. In particular, four major factors defining the development of Montreal’s contemporary culinary landscape are identified: the early seigneurial system, the casse-croûte (snack bar) tradition, the post-WWII immigration wave, and – somewhat bafflingly – Expo 67. The latter, for instance, is explained as the moment when European chefs began to arrive in large numbers. “Its restaurants and pavilions attracted many of the world’s chefs to Montreal, and lucky for us, many of them stayed. Of these chefs, the majority were French. They came for the food and stayed for the forest, rivers, lakes, and the women (hey, it was the summer of love!).”[5]

Somehow, however, the story being told is not the incoherent mess that this description indicates but, instead, is a somewhat fantastic bricolage of images, smells, tastes, and memories that manages to give a compelling account of our current culinary moment and something of a unique commentary on Montreal’s popular self-image in the post-Quiet Revolution era. Chip shacks and delis, for instance, are placed on as high a pedestal as groundbreaking Montreal restaurants like Toque! or Citrus. Recipes simultaneously look traditional and modern, high-end and low-class, French and English (and Jewish and Irish and Haitian and many of the other groups that make up contemporary Montreal) and therefore range from the fanciful tongue-in-cheek high/low hybrids like Pork Fish Sticks or a Fois Gras Breakfast Sandwich to the more traditional and straightforward Pate en Croute, Schnitzel of Pork, or Chicken Jalfrezi.

Like many of the best cookbooks, The Art of Living According to Joe Beef seems to invent, as much describe, the culture of eating in its particular time and place. While The Joy of Cooking, for its part, presented a novel vision of American food traditions that – in a particularly white, Midwestern way – worked to bridge the country’s diverse foodways through its encyclopedic format and sheer volume of recipes, The Art of Living According to Joe Beef tries to overcome Montreal’s fractured linguistic, ethnic, and class divisions through an appeal to a common history and a common love for delicious foods that extends beyond – but also necessarily includes – the usual gravy-covered and cheese-curded suspects. (You know who you are.)

Sure, the history is often of the not-quite-true variety and most of its recipes would be unfamiliar or inaccessible to the average Montrealer, but the book presents a fascinating and compelling argument for a truly unique Montreal culinary tradition that traces its lineage from habitant culinary traditions to the original Joe Beef’s Canteen, fine French restaurants, and roadside casse-croûtes. Perhaps tall tales and half-histories are essential to the act of imagining and inventing culinary traditions across time and space. Taste is, indeed, personal and the food at the original Joe Beef’s Canteen was probably awful. This imagined Montreal – made real at the contemporary Joe Beef and through this cookbook – looks to me like a vibrant, living cuisine – grounded in Montreal’s past – and looking confidently to the future.

6 thoughts on “Joe Beef and the Invention of Culinary Tradition”