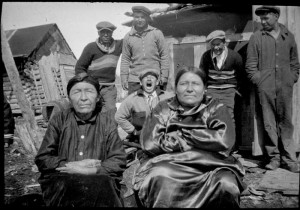 Historical photographs can be used to serve a variety of research, personal, and community interests.  Images can be used for genealogy, legal testimony, supplementing written historical accounts, and providing windows into the past. Photographs can also be used as important tools in healing, reconciliation, and in the reclamation of lost history.The use of photographs in the reclamation of history resonates most frequently with minorities and repressed peoples.  Historically many underrepresented groups simply did not have access to the means to take photographs.  This does not mean that photographs were not taken of them by other groups.

The history surrounding the creation of this type of photograph is far from uncomplicated.  One of the problems with photographs of minority groups being taken by those in power is that typically little information about the people in the photographs is recorded.  Images of early Euro-Canadian explorers in Northern Canada often have the explorers identified and no information about the indigenous people or communities.  Additionally, the power relationship that existed at the time of the photographs may have contributed to photographs being staged or taken without consent, which brings into question the authenticity of the scenes captured in photographs.

These problems of identification and authenticity can be clearly seen in the case of students who attended Indian Residential Schools in Canada.  Many of these survivors or their families do own photographs of themselves from their time at Residential School.

However, many photographs were taken by school staff, representatives from the Canadian government, and local missionaries.  In some cases photographs at Residential Schools were taken for promotional purposes.  For 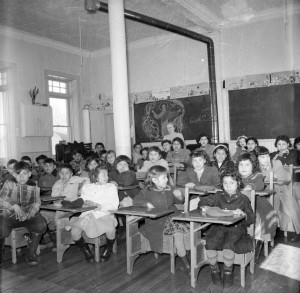 example, there are sets of photographs from all across Canada that picture students from different schools in similar poses holding the exact same toys.  These photographs were taken by the Canadian government as a form of propaganda, to highlight the quality of treatment students received at the schools.  Very rarely did students ever see copies of these or any other photographs taken of them.

Today, many Residential School Survivors and their descents are discovering lost portions of their history. Initiatives are being undertaken by heritage organizations to reunite photographs with the people in them. Many archives are now reaching out to First Nation communities to gain an understanding of who is in these photographs, and to provide copies of images to families.  This can be seen at Truth and Reconciliation Commission events throughout Canada, community gatherings, and heritage institutions of all sizes, where people are being exposed to photographs of themselves or family members at Residential School for the first time.

This reconnection with a visual representation of the past can be extremely emotional for all involved and can cause both positive and negative memories to surface.  I’ve been privileged to be present while family members are seeing photographs of their grandmother, auntie, parents, or other relatives for the first time.  Seeing these photographs can cause tears, laughter, anger, and almost any other emotion you can imagine.

These long buried images allow families to reconnect with part of their past that has been forgotten or never spoken about.  Knowing what your ancestors looked like, or what you looked like as a child, can help individuals reclaim a portion of their past that was previously held by the government or schools outside of their reach.  No longer are only the staff named in the photographs and the students relegated to supporting figures. Rather, the important history of student experience at Residential School is being commemorated, respected, and brought to the forefront.

The problem of lack of identification and information about photographed Indigenous people in Canadian is mirrored throughout the world.  Wherever one group held power over another there is still a tremendous amount of work needing to be done to identify minority and repressed people in photographs and to help reunite people with their own photograph history.