The news that the Duchess of Cambridge is pregnant has made headlines around the world, including here in Canada.  Assuming a healthy child is produced, there will be three generations of royal heirs waiting for their turn to assume the throne after Queen Elizabeth II.

In Canada, the debate over the monarchy has generally been muted for a long time.  There seemed to be an unspoken consensus that it would be impolite to criticize the institution during the reign of such a respected lady, that the discussion would be postponed until the less loved Prince Charles became king. 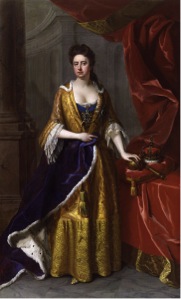 Then, a few years ago, Charles’ sons William and Harry started getting the Hollywood treatment, while a Conservative government began to reinforce the presence and reputation of the monarchy in Canada.  Most recently, a royal marriage and a royal pregnancy involving a young, attractive couple seem to have renewed popular connection to the institution.  The continuance of the monarchy after Elizabeth in Canada has become a foregone conclusion, at least in most circles.

The monarchy has a long history in Canada.  The dynastic wars between England and France greatly influenced colonial development.  The Crown’s representatives negotiated military alliances and, later, land treaties with Aboriginal peoples.  Occasionally, a monarch intervened personally in a colonial matter, such as when Queen Anne wrote to her officials of newly-conquered Nova Scotia in 1714, advising them against deportation or any harsh treatment of the Acadians and emphasizing that she considered these French Catholic people “her subjects”.  This led to a thirty-year period of relative peace and prosperity in the colony.  In 1754, King George II authorized the plan to destroy the fort and settlement at Beauséjour and to deport its inhabitants, although it seems that the king was never consulted on the idea of removing all of the Acadians.[1]

Even at that time, the monarchy’s power was constrained and balanced by that of the British Parliament.  Today, however, it is clear that royal power is mostly symbolic.  This leads to the obvious question, why keep it around?   There are several arguments to be made, such as the value of tradition and the moral influence that the monarch can still employ, whether to buoy the spirits of their own subjects or to push for peace, charity and other humanitarian causes.  Some point to the institution of the British Commonwealth, the promotion of “citizens’ rights” and notably its role in pressuring the South African government to end apartheid.  We have been celebrating the accomplishments of many Canadians with the Queen’s Diamond Jubilee Medal.  Less nobly, we might consider the gargantuan task of removing the monarchy as head of state from the constitution and conclude that it is not worth the trouble.  In short, the opposite question surfaces – why get rid of it?

It is easy to fall into the trap of seeing history as a linear progression towards greater prosperity, freedom and maturity.  With regards to Canadian political independence, however, there is an undeniable evolution.  We achieved responsible government in 1849, then self-government in 1867, then legislative independence in 1931 and our own Constitution and Charter of Rights and Freedoms in 1982.  We are, of course, proud of these accomplishments.  Yet each was “granted” by the monarch (in some cases, grudgingly).   A student recently asked me how Canada could be considered a free and independent country if it was still subject to the British Monarchy.  My immediate answer was that Elizabeth was also the Queen of Canada and that Great Britain had no other control over our legislative and executive processes.  But the more I reflect on this, the more I think that this answer is insufficient.

But what was I going to do about it?  The Church was part of who I was.  It was part of who I had always been.  It was hard to imagine who I would be without it.  I thought, for a time, that I could help reform the institution from within.  Perhaps the Church would change its outlook on sin, women, sexuality and priestly power.  Certainly there have been small efforts to change the culture.  But ultimately, I realized that I could not be happy being part of something that I did not believe in.  I wish that I could say that I made the decision to leave on my own.  However, it took a zealous priest denying me the sacraments because I had not wed in the church to give me the final push.  I left, and I have not looked back.

That struggle, that agonizing, painful struggle with my faith, with my identity, and with my God, made me a better, happier person in the long run.  By the way, I would like to thank Andrew Nurse for opening the door to talking about religious influences on our lives and work.

What does this have to do with the monarchy, another medieval institution that has always been part of our history?  I know it is hard to imagine ourselves without it, and I know that it is not all bad.  But maybe the time has come to face that very simple fact.  Do you still believe in the monarchy?  Is it ok for a head of state to be chosen by birth and his or her representative in Canada nominated by decree?  Does it make sense that the governor-general reads the prime minister’s throne speech, like the puppet of a ventriloquist?  Do you believe that our legislative and constitutional decisions need to be approved by a monarch or his or her representatives?  Should military and civil officers swear allegiance to the monarch, or to Canada?  Do you think that an institution with a long history of imperialism and violence should remain part of our society going forward?

In 2003, Queen Elizabeth II asked the Acadians to “turn the page” on their history, acknowledging the suffering that the deportation of 1755 had caused but suggesting that it was time to move on.  Perhaps it is time for Canadians to take that advice and move on from the monarchy.  I do not expect an immediate answer, nor am I sure if this is the right decision.  The monarchy is part of who we are.  Perhaps reform, like the apparent consensus to end the discrimination against women in the succession law, is a viable option.

People tend to have an immediate, visceral response to questioning the monarchy.  Whatever your initial reaction may be, I believe that a reflective, heartfelt, non-partisan and probably agonizing discussion about the monarchy’s place in our future, whatever we decide, would make us a better, happier nation moving forward.  Part of being an adult and, by extension, an adult nation, is questioning what has been given to us by the past and determining what is best for us in the present and moving forward.

This critical reflection is also part of being a historian.  History is not rigid and judgemental; it is fluid and interpretive and changes over time.  Active historians can be leaders in promoting this kind of engagement and discussion amongst the general public.