I have a love for most things history related and I thoroughly enjoy all kinds of comics.  So when these two interests collide I take note. There are a number of great contemporary history themed comics such as Machiavelli and Hark! A Vagrant (check out Ian Mosby’s great post about this webcomic).  The idea of using comics to illuminate the past isn’t an idea that first appeared with the advent of the webcomic genre or even the relatively recent explosion of Marvel and DC comics. Archival collections can provide an interesting glimpse into the longstanding use of comics to teach history.

Recently, I’ve been working with issues of the Indian Record from the 1940s to 1960s.  The Indian Record was published ten times a year by the Missionary Oblates of Mary Immaculate and acted as a newsletter for catholic missionary entities in Canada.  The newsletters provide fascinating insight into missionary work in Canada, with a focus on Residential Schools and First Nation missions.

But, what really caught my eye was the prevalence of comics in the newsletter.  Starting in the 1950s the Indian Record featured an ongoing comic called “The Apostle of the Hurons” which outlined the life and mission work of Saint Jean de Brébeuf (1593-1649).  The comic is far from what is considered politically correct by today’s standards but, when looked at through the lens of the time period, the comics provide an interesting reflection of missionary work in Canada. 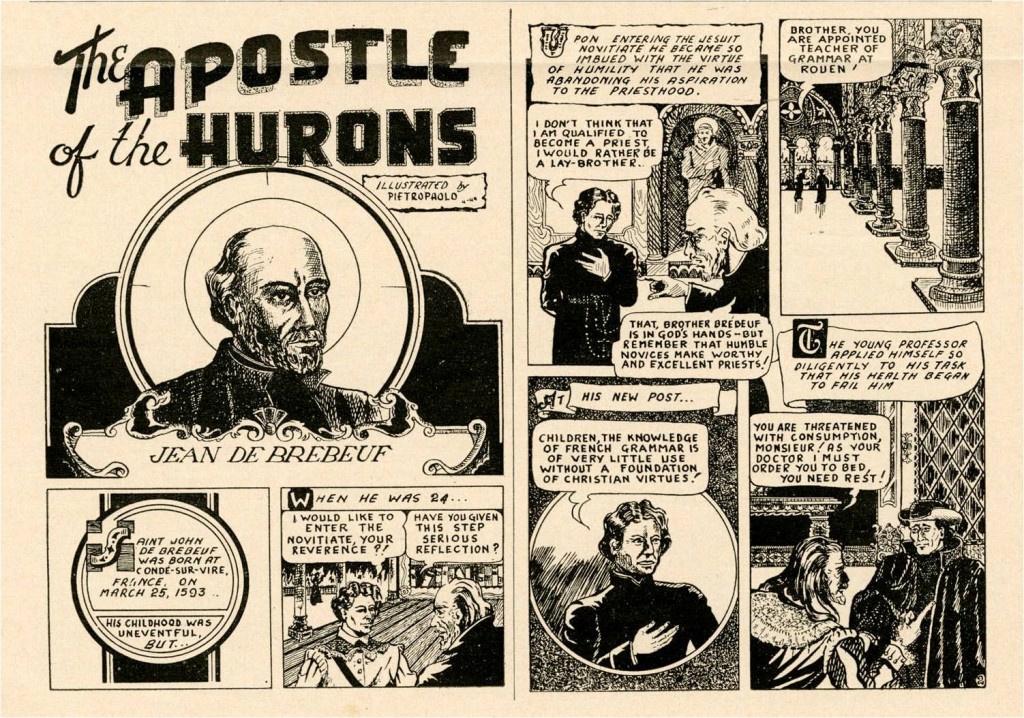 In the 1950s, many church entities were actively involved in assimilation practices through the Residential School system and missionary work was still being undertaken at remote First Nations across Canada. Brébeuf is attributed as being responsible for the establishment of a Christian mission in the Huron Nation in Ontario, making him a notable historical figure and an example of ‘successful’ mission work.  The “Apostle of the Hurons” comic portrays Brébeuf as a missionary hero, with adventure and historical fact thrown in for good measure. 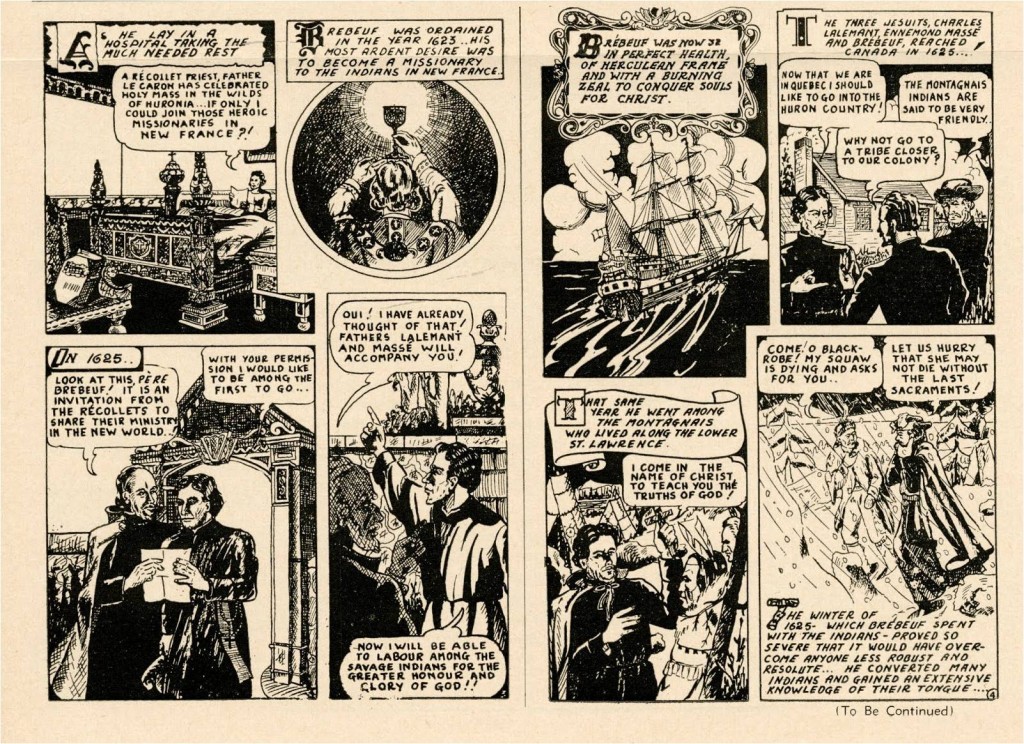 In addition to this serial comic the Indian Record also includes a variety of editorial style comics.  The majority of these comics were titled “Strange But True” and focused on snippets of religious oriented trivia.  In a single panel the “Strange But True” comics tell historical facts while providing illustration and visual points of interest to the text heavy newsletter.

The history themed comics in the Indian Record and the fact that these comics are now part of an archival collection, made me wonder about the prevalence of comics as part of the archival record.  Some comics fit more easily within the boundaries of archival material and are more likely to be saved– the comics in the Indian Record were saved merely because the newsletter was seen as historical. Similarly, editorial style cartoons tend to be saved when newspapers are preserved.

But what about stand-alone comic strips or comic books? A tremendous amount of social and political commentary can be found in comics. One of the best examples of historical commentary in comics can be found in  Art Spiegelman’s 1980s serial comic Maus, (and later full length Pulitzer Prize winning graphic novel).  Maus is a partially autobiographical comic which depicts Spiegelman interviewing his father about his experience during the Holocaust — only all the humans are depicted as animals.  The Jewish race is drawn as mice and the Germans as cats. The comic is a graphic representation of the oral history that Vladek Spiegelman shared with his son and comments directly on a historical event that changed the world.

Spiegelman’s Maus is one of many historically informed comics which would benefit from archival preservation.  In the case of Maus, Hillary Chute of the University of Chicago explored the nature of comics as archival material in their own right when collaborating with Spiegelman on the MetaMausbook.  Chute rightly argues that Maus and other graphic works can assist in the preservation of personal and cultural histories by presenting them in a different medium.  Spiegelman incorporated photographs and archival material into his graphic depictions of his father’s oral history making the comic itself a work of archival research.

Comics and graphic works have the potential to act as vibrant historical sources that present history in ways which are not always possible in textual records.  Should every comic that has ever been created be preserved in an archive? Probably not.  But, neither should ever piece of written correspondence.  Many archives continue to struggle with the categorization of comics in archival repositories and need to actively consider how to best preserve this type of historical record.

Krista McCracken is the Archives Technician at Algoma University’s Shingwauk Residential Schools Centre, she is a co-editor of Active History.

5 thoughts on “Graphics in the Archive: History and Comics Unite!”