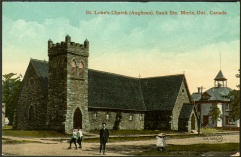 Over the last couple of years, I began to take notice of the churches in my home town of Sault Ste. Marie and admired their architectural design and details. My interest spread and I started looking for other churches and as is human nature, compared them, noticing the marked differences in their range of decorative detail and size.  I realized I was looking at the church structures as they stand today but knew nothing of their origins. This architectural interest festered to the point where I ultimately took it on as a research topic.

Given the local nature of the project, I expected the collection of information on the various churches would be a simple task. Merely organizing their construction dates chronologically would probably explain the progression from simple church buildings to more ornate and larger structures. This was not the case for either documentation or explanation. The most surprising outcome of this project was how much of the community’s early development influenced church construction. Consequently, an understanding Sault Ste. Marie’s history was the key to my understanding of local building history.

Ultimately, the answer to the question of variations in church architecture had less to do with when the church was built but more to do with who was involved. I found that churches reflected the congregation at the time of construction. As institutions, churches are different by their very function. Their congregations, although sharing a common faith, represent cross-sections of the community. As members of both the community and the church, congregants were the link; thereby what affected one, influenced the other.

This related directly to a congregation’s ability to raise money to fund the construction and maintenance of a new church. The amount of money raised for the churches was directly influenced by two important characteristics of the congregations, the number of members and who the members were. The first is self-explanatory, but the “who” had a profound effect in a period when class was still a factor on a person’s ability to directly contribute to or network with other community members. 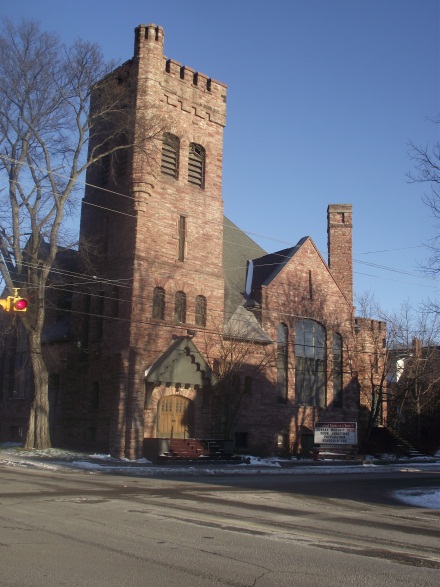 The first four churches built in the village of Sault Ste. Marie between 1870 and 1876 demonstrated this point. The Anglican “St. Luke’s” and Roman Catholic “Sacred Heart” churches were designed by architects to be large, stone faced structures in a Gothic revival style. Both of these churches were built on land previously secured from the Dominion government through their Dioceses. Most important at the time, was their combined following of 77% of the population (approx. 680 people). In comparison, the Presbyterian “St. Andrew’s” and Methodist “Central” built modest, clapboard faced, wood-framed structures in a typical North American “mission” style. The land for both of these churches was donated by members of the congregations. The combination of both congregations totaled a mere 20% of the population (approx. 176 people). In the early churches, numbers mattered.

Expansion of the railway and the development of new industry in Sault Ste. Marie attracted new citizens and the city’s demographics changed dramatically. The Anglican and Catholic churches expanded and the clapboard Presbyterian and Methodist churches were replaced by large, stone faced churches built in a Gothic revival design. The congregations of both churches swelled and included many of the community’s merchant and professional class as well as political figures of all levels.

The opening of the new canal and railway links combined with the development of hydro-electric power, spurred a whole number of new industries, drawing people to the area. The majority were immigrants from Europe. Many of the arrivals worked in one of the newly opened mills and settled into homes and boarding houses on the perimeter of the industries in which they worked, reshaping the western edges of the old community. Since all the originally established churches were within a five minute walk of each other, in the eastern end of the community, there was pressure to provide churches in the new western neighbourhoods of Steelton, Tagona, Korah and Bayview. Geographically, all the new churches built between 1900 and 1920 were in the western side of the community. This came with support from the Roman Catholic and Anglican Dioceses for new parishes and the Protestant faiths provided assistance for missions and eventually new church buildings. 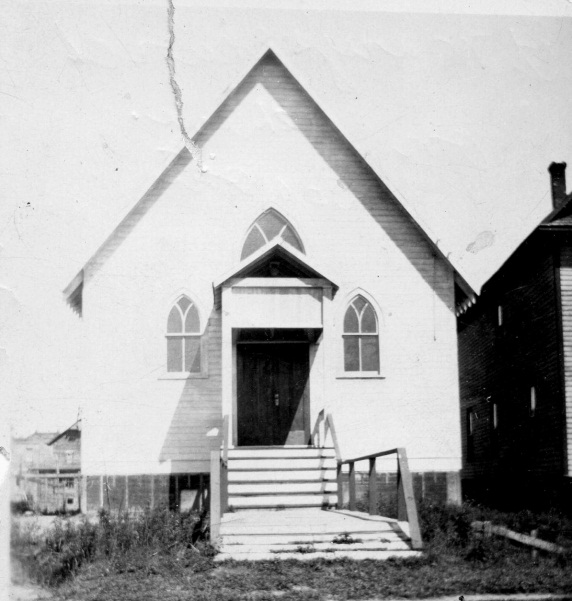 The second noticeable trend was the comparatively small scale and simple design of these churches. Again, the reason for the difference was financial resources. Most of the newly arrived immigrants were employed as unskilled workers and consequently earned a basic wage. Pressure to set up new households left little for the founding of new neighbourhood churches. These churches were built using the most basic designs, building materials and sized to satisfy the congregation’s numbers. Most were all wood frame buildings with the exception of three which made use of local brick manufacturing. There was no attempt to identify these structures with any architectural style except for the traditional rectangular shape.

Within these new communities, various national groups assembled to build churches representing their own faiths in the tradition of their respective cultures. This further subdividing of the locals reduced the money to build churches for even smaller groups thus forcing the congregations of both the Lutheran and Greek Catholic churches to build churches that resembled a standard house within their neighbourhood.

Churches are multi-generational and many of their structures have stood the test of time. They are important landmarks, that when analysed, can provide a glimpse into the history of not only the church itself but the people that built it and their place in the community and its development. Take a few minutes to look at these architectural works and imagine the impact on the community when it was consecrated.

Dan Oliana is an Architectural Design Technologist and a graduate of Algoma University with a Bachelor of Arts (Hon) in History. He continues to do research on local community history.