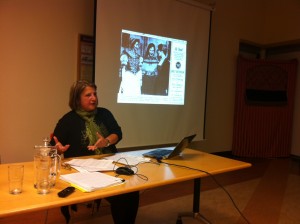 Did Torontonians accept different ethnic cultures before the federal government initiated the road towards “official multiculturalism” during the early 1970s? If so, why? Where can we find examples?

Award-winning historian Franca Iacovetta explored these questions in front of a public audience at the Toronto Public Library’s Dufferin/St. Clair Branch on February 28th as part of the 2013 History Matters lecture series. “Public Spectacles of Multiculturalism: Toronto Before Trudeau” examined the International Institute Movement of Toronto’s use of public spectacle and pageantry to promote cultural pluralism in a pre-multicultural Toronto.  Her lecture – filled with fascinating photographs of dress, craftwork, food, and other aspects of ethnic culture – continued research she published in “Immigrant Gifts, Canadian Treasures, and Spectacles of Pluralism: The International Institute of Toronto in North American Context, 1950s-70s,” (Journal of American Ethnic History; Fall 2011). Iacovetta is currently working on a book on the subject.

The next talk in the 2013 History Matters series takes place at the Maria A. Shchuka Branch of the Toronto Public Library on March 27th from 6:30-8pm. PhD candidate Funké Aladejebi (York University) will relate the compelling story of how black organizations in Toronto used education to combat racism by making connections to “Africa” and adapting the language of Black Power to a Canadian experience. Click here for more information on this and other talks in the series.