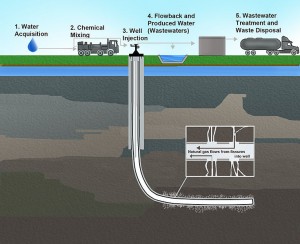 The recent showdown between Native protestors and police over “fracking” in New Brunswick brought together several contentious issues that have simmering, and periodically boiling over, in Canadian society as of late (an interactive map of New Brunswick fracking can be found here). Obviously one of them, and probably the most prominent, is the Canadian state’s past and present treatment of First Nations.

But another is the use of fracking, short for hydraulic fracturing (the oil and gas industry tends to spell it without the “k” – so “fracing” or “frac’ing”). Though I don’t want to downplay the many vital Native rights issues at stake, I do want to concentrate here on the fracking aspect. In Canada, this method of energy recovery has intensified and increased in the past decade, especially the last few years. For example, Apache Corp claimed in 2011 that it had performed in northern British Columbia the largest hydraulic fracturing operation ever – and then topped it a few months later.

Fracking typically involves the pumping of massive volumes of water at high pressure in order to fracture rock, often shale, where natural gas is trapped several kilometers underground in rock formations. Chemicals are included in the mix, as is a “proppant” such as sand, which is used to keep the fracture open and allow the gas to flow to a well where it can be recovered. Fracking became a particularly effective means of accessing unconventional and previously inaccessible sources when combined with horizontal drilling – if it helps, think of The Simpsons episode where Mr. Burns used slant-drilling to steal the oil under Springfield Elementary.

The first Canadian fracking took place in central Alberta during the 1950s. However, it wasn’t until the 1980s and 1990s that the technology and techniques really accelerated the use of fracking in North America, spurred on by dwindling domestic supplies of conventional oil and gas. Since its initial development, fracking has been used tens of thousands of times in Canada, often for old wells that had been considered exhausted (see the Council of Canadians fracker tracker: http://www.canadians.org/fracking/fracker-tracker). And fracking has been significantly more common in the United States.

As a water historian, the part of fracking that first caught my attention a few years ago was the massive amounts of water that are used. This causes numerous problems. First off, the millions of gallons of water that is used by each “frac-job” has to come from somewhere – such as nearby lakes, rivers, and aquifers – and displacing massive amounts of water in this fashion is always ecologically dubious. Furthermore, these water withdrawals are rarely regulated. And where does the water go after it has been used? This is perhaps the biggest concern for the water, particularly since it is rarely subject to regulation and oversight. The water is often contaminated, either by the chemicals used as part of fracking or by exposure to other contaminants in the well or underground.

There are significant climate change repercussions as well. According to Robert Howarth, a Cornell University biologist and ecologist, “the rate of venting and leakage of methane to the atmosphere is sufficient to give shale gas a larger greenhouse gas footprint than any other fossil fuel.” And fracking is aiding tar sands production. Another side effect is earthquakes: there have been hundreds of documented quakes resulting from rock fracturing. Methane gas builds up after gas extraction and can cause all types of problems.

Proponents argue that natural gas is much “cleaner” than coal. Or they contend that fracking leads to a reduction in oil imports (thus reducing transportation costs and dependence on foreign supplies) and increases local employment and economies. Then there are oil/gas industry representatives, who just deny the impacts outright. In 2010 the ExxonMobile CEO claimed “there have been essentially no instances of groundwater contamination ever documented that were attributable to hydraulic fracturing,” giving new flexibility to the already slippery meaning of the word “essentially.” The Canadian Association of Petroleum Producers (CAPP) has released statements to the same effect.

Of course, objective evidence generally says the opposite, citing not only different forms of water contamination and earthquakes, but a laundry list of blowouts, explosions, and wells bubbling up in the midst of communities (for just one example see: Brief Review of Threats to Canada’s Groundwater from the Oil and Gas Industry’s Methane Migration and Hydraulic Fracturing). Companies don’t have to disclose what chemicals they use in the fracturing process, though they apparently include harmful carcinogens. And in order to receive compensation, people harmed by fracking have to enter into non-disclosure agreements (i.e., gag orders).  Not to mention that these are the same outfits claiming that pipelines don’t frequently leak, despite Sean Kheraj’s and CBC’s evidence to the contrary.

Now, just because the industry’s claims are so obviously disingenuous doesn’t automatically entail that we should uncritically accept as fact the most alarmist claims about fracking. And we have to be realistic and give some credence to economic development arguments. However, we also need to get over this mantra that everything is justifiable if it creates jobs and economic benefits – if for no other reason than the fact that the jobs are almost always fewer than promised, and the benefits usually only flow to a select few.

Not unlike the gas that is being fracked, we’re stuck between a rock and a hard place. We are ruining the planet and can’t trust oil/gas companies any farther than we can shoot them with a high-pressure water hose. But we are an energy-dependent – nay, energy-addicted – society. Will it do much good to slow down or stop fracking if we don’t change our overall consumption and energy patterns? The motivation here is profit – as soon as these trapped gas supplies are less profitable than an alternative, or if there was no demand, fracking would likely be abandoned.

France and New York State have imposed moratoria on fracking. Some Canadian provinces have, or are attempting to, regulate fracking – but the eastern provinces seem much more cautious than their western counterparts. In fact, along with the federal government, the provincial governments of B.C., Alberta, and Saskatchewan seem all to eager to cozy up to fracking companies and let them freely do their thing.

Because there are still so many unknowns, and the potential for drastic ecological repercussions so pronounced, we need to fully investigate this energy recovery process. Fracking desperately needs regulation and oversight. There needs to be full and open disclosure on the impacts of fracking and other potential harms stemming from the oil and gas industry. And we need further research on Canada’s energy history to better contextualize this particular resource extraction industry and inform future decisions. My guess is that the benefits won’t outweigh the costs, at least from the perspective of the average Canadian.

Daniel Macfarlane is the Visiting Scholar in the School of Canadian Studies at Carleton University, and was the 2013 Fulbright Visiting Research Chair at Michigan State University.

One thought on “A Big Fracking Deal”