In addition to this article, ActiveHistory.ca is happy to present a recording of Jessica Squires’s talk as part of the Ottawa Historical Association lecture series. The talk was given on October 8 and was titled “Building Sanctuary: The 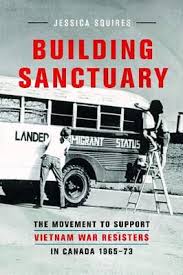 Anyone who I talk to about it, and who later describes my project to someone else, tends to say it is about draft dodgers.  The topic of Canadian support for resisters becomes the topic of the war resisters themselves. This may seem like a minor distinction, but I think it says a lot about the strength of the idea of Canada as a haven for war resisters. So strong is that idea that the importance of Canadian popular support for American war resisters is easily overlooked, because part of the story is that Canada has always been such a haven. There is an assumption that the support would have been automatic, homogeneous, and unproblematic from all levels of society, and so no movement to support resisters should have been necessary.

But while Canada did allow draft dodgers and deserters from the U.S. to find refuge from militarism across our border, the myth tends to omit any consideration of how that refuge was actually achieved: through the efforts of a social movement.

The presence of myths in history – their formation, their influence – has never been easy for historians to address.

I share with Daniel Francis a view that to interrogate and question myths is not to suggest that there is no truth to them.  Rather, the aim is to unravel, question, and fill in the gaps – to make the picture as complete as possible.

My research shows that the experience of war resisters in Canada in the late 1960s and early 1970s, during which time the haven myth was entrenched, was actually the product a complex and varied set of relationships, actions, and interactions by and among various individuals, institutions, and groups.

This myth represents an important part of the larger image of Canada as a peaceful nation, which, in turn, is often attributed to the government of the day, the Liberal administration of Pierre Trudeau. One example of its tenacity is the ubiquitous presence of the following quotation attributed to Trudeau:

Those who make the conscientious judgment that they must not participate in this war … have my complete sympathy, and indeed our political approach has been to give them access to Canada. Canada should be a refuge from militarism.

This quotation crops up in two of the important works on the subject of war resisters in Canada:  in Renée Kasinsky’s 1976 work, Refugees from Militarism: Draft-Age Americans in Canada, and in John Hagan’s 2001 book, Northern Passage: American Vietnam War Resisters in Canada. It has also been mobilized by today’s left alternative press and the current campaign to allow American war resisters from the Iraq conflict to stay in Canada.

It is true that, in a series of speeches in early 1969, the Prime Minister and his Minister of Manpower and Immigration, Allan MacEachen, instructed immigration officials that military service was not a matter for interrogation at the border or in immigration offices when considering applications to move to Canada.   But as Archivist and Vietnam war resister Joseph Jones has demonstrated, the Trudeau quotes came after the announcement concerning the border.

The events leading to that decision were more complicated than the myth leads us to believe. The experience of war resisters and those who supported them was far from uniform as they interacted with government officials, police, and each other, both before the 1969 announcement, when the majority of American war resisters coming to Canada were draft dodgers, and after, when the balance shifted towards deserters. The Canadian anti-draft movement’s interaction with government officials and police, and interactions between activists and resisters, were complex, and support for these immigrants was neither monolithic nor unanimous.

How did this myth come to be so prevalent? I think it is useful to place the question in a Gramscian frame, and think about it in terms of how ideas interact with events, and vice versa. The authors and activists discussed in the subsequent discussion of left nationalism, can be seen as Gramscian “organic intellectuals.”   They are both independent, and connected to existing groups with existing material interests.

Anti-draft activists and groups pressured government officials through public media campaigns to help war resisters immigrate successfully.  In doing so, they consciously acted to change the story being told about the resisters. Contemporary books and pamphlets, news coverage, and other depictions constructed competing stories of war resisters. In counterpoint to narratives casting war resisters in the roles of criminals and cowards, the war resisters support campaign of the 1960s created stories of draft dodgers as heroes and ordinary people. The activists were intentionally shaping that narrative.

The constellation of arguments made by the anti-draft movement, taken together, shared themes with emerging left-wing notions of Canadian nationalism, in contrast to equally nationalist, but more conservative, ideas about deserters as criminal cowards.

Taken together, letters to the government, the media campaign, and the lobbying efforts were successful in securing an open border for American deserters.  The campaign was characterized by a debate about nationalism, with proponents of an open border using left-wing nationalist arguments while those opposed to war resisters used right-wing nationalism to bolster their position.  Arguably, the nationalist arguments made possible the success of the campaign to open the border.  However, at the same time, the left-wing nationalist position was still one of a defence of Canada, which put deeper critiques of the Canadian state and its immigration policies out of reach.

One thought on “Building Sanctuary: The Movement to Support Vietnam War Resisters in Canada, 1965-1973 (Including Podcast)”