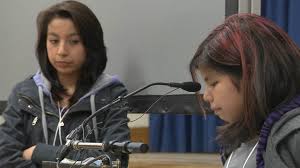 Indigenous filmmaker Alanis Obomsawin has created yet another gripping and sober documentary about Indigenous issues in Canada. With 2013’s Hi-Ho Mistahey! (which roughly translates as “I love you forever” in Cree), Obomsawin showcases her filmmaking prowess as she examines the educational experiences and frustrations of the Attawapiskat First Nation in northern Ontario.

I recently had the opportunity to see Obomsawin’s newest release at the Re-Frame International Film Festival in Nogojiwanong (Peterborough), Ontario. As with Obomsawin’s previous films such as Kanehsatake: 270 Years of Resistance and Our Nationhood, Hi-Ho Mistahey! blends history, politics, and storytelling. The result is a powerful film that brings much needed attention to the inspiring youth activism and struggle for Indigenous schooling in the North.

Hi-Ho Mistahey! focuses on the efforts to improve on-reserve education in Attawapiskat. On-reserve schools are currently funded by the federal government and, as Obomsawin shows, educational conditions are extremely poor in Attawapiskat. A massive diesel spill in 1979 slowly contaminated the community and by 2000 the J.R. Nakogee primary school was declared unsafe for habitation as many students were getting sick. On May 11th, 2000 the school was closed and replaced with a series of “temporary” portables; the federal government promised that a new school would be built in the near future. After a decade of broken promises, the community of Attawapiskat was still waiting for their new school. In this context, a youth movement emerged to demand better educational services.

Hi-Ho Mistahey! examines the “Shannen’s Dream” campaign for education reform in particular. In 2007, when the federal government backed away from the project to build a new school for the third time, Attawapiskat teenager Shannen Koostachin responded with organized activism. Before her untimely death in 2010, Koostachin advocated for the right to “safe and comfy” schools. She became a force in her community and inspired other kids and teens to speak up for better educational opportunities and to raise awareness generally about the struggles they faced in northern communities. Shannen and her fellow youth activists presented at conferences, gave interviews to newspapers, used social media, and even protested on the steps of Parliament in Ottawa. In 2008, Shannen was nominated for the International Children’s Peace Prize.

After Shannen’s death, her “dream” of better educational opportunities in the North was taken up by her older sister, Serena, and friends like Chelsea Jane Edwards. Hi-Ho Mistahey! follows their organized efforts as part of the “Shannen’s Dream” campaign and documents how Shannen’s spark of activism set fire to youth activism in Attawapiskat. After briefly exploring the roots of schooling policy in the North and drawing attention to current problems in Attawapiskat, Obomsawin shows how the Shannen’s Dream campaign, with help from NDP Member of Parliament Charlie Angus, successfully pressured the House of Commons to unanimously adopt the Shannen’s Dream Motion 201 in 2012. This motion commits the government moving forward to increasing funding and improving educational facilities and opportunities for Northern communities.

In the early twentieth century, in an effort to scale back spending, the federal government reduced funding for Residential Schools (at the time referred to as Industrial and Boarding schools), which drastically affected the quality and accessibility of education for many Indigenous children. The horrors of Residential Schools as a result of purposeful underfunding have been well-documented by such historians as John Milloy, J.R. Miller, and Mary-Ellen Kelm. Moreover, other historians such as Frank Tough and Hugh Shewell have shown how the government used underfunding strategies throughout the nineteenth and twentieth centuries as forms of coercion. Indeed, the government aimed to make conditions in communities intolerable enough that Indigenous peoples would accept everything from treaties to assimilationist policies designed to integrate them more fully into a capitalist economy.

Without this longer historical frame, Hi-Ho Mistahey! understates the severity of the situation in northern communities and makes it appear as though schooling will be improved simply by heartfelt letter writing campaigns and the lobbying of enthusiastic MPs. To be sure, these methods certainly will not hurt, but it is also important that people understand Indigenous education in the context of on-going Canadian colonialism. In fact, when viewed in its proper historical frame, inadequate schooling today can be seen as a symptom of a larger problem: that colonialism and capitalism have shaped, and continue to shape, Canada’s so-called “Indian” policy.

Hi-Ho Mistahey! is an important new documentary that sheds light on the creative struggles by Indigenous youth to improve education in the North. While a deeper historical frame in the film would have shown how current policies are a continuation of coercive colonial strategies, audiences will no doubt learn a great deal about, and be inspired by, Shannen’s dream as well as those working to bring about educational change for Indigenous communities.

Postscript
On February 7th, 2014, as this post was being processed for publication, the federal government of Canada announced changes to the First Nations Education Act, including $500 million for on reserve infrastructure over a seven year period beginning in 2015. On the surface there are many positives features in the announced changes. Increased funding and greater support for cultural changes to curriculum are long overdue. However, as the community of Attawapiskat knows all too well, making promises and implementing changes are very different. Moreover, these changes to schooling policy–like the creation of mission schools in the 1870s, industrial and boarding schools in the 1880s and 1890s, residential schools in the early 20th century, integrated schools in the 1950s etc. – need to be understood in a colonial context. As the details of the changes to the First Nations Education Act continue to be revealed, it will be important to see beyond the dollar signs and, with a historical frame firmly in mind, understand how the federal governments’ announcement is just the latest strategy to try to integrate Indigenous peoples into the capitalist economy. Regardless, it is hoped that the new changes will help Indigenous communities get the “safe and comfy” schools they deserve.

Sean Carleton (@SeanCarleton) is an activist, educator, and writer living in Nogojiwanong (Peterborough), Ontario, Anishinaabe Territory. He is a PhD Candidate in the Frost Centre for Canadian Studies and Indigenous Studies at Trent University and he studies the history of colonialism, capitalism, and education in Canada.