I recently had the opportunity to participate in a roundtable discussion held by the Department of Political Science here at the University of Moncton.  The topic was “Current Foreign Policy and Defence Challenges in Canada” and the roundtable included Jocelyn Coulon, an expert on Canada’s involvement with United Nations peacekeeping operations as well as Jean-François Caron, a political science professor studying Canada’s recent emphasis on bilateral relations with the United States.

Needless to say, I learned a lot.  In particular, I was struck by the importance of the symbolism of the Canadian peacekeeper in public opinion and the ways in which, since the end of the Cold War, military operations have evolved to include more complex counterinsurgency, reconstruction and other kinds of “nation-building”.  My role in this was to bring a historical view to these issues.  Given the current international crises in Syria and Ukraine, and this month’s end to Canada’s mission in Afghanistan, it seems an opportune moment to reflect on our country’s role in international affairs as well as how best to orient our military forces moving forward.

Most readers of this blog will be well aware that the interpretation of Canada’s military history is disputed ground these days.  I have written previously about myth-making surrounding the commemoration of the War of 1812, and I am certainly not alone in questioning the current government’s attempts to create an “epic” view of our past. 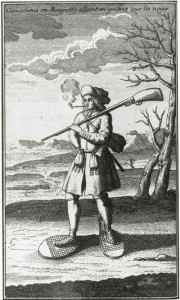 A Canadien goes off the war on Snowshoes

Canada undoubtedly has a military past.  Indeed, it is difficult to imagine a society more militarized than that of New France.  From military governors and royal troops to the mass involvement of the colonists in militias, life in the colony had a solidly military character.

The British Conquest did little to change this.  For decades, the government remained essentially composed of military officers concerned with military matters (as it did in Nova Scotia after the conquest of that colony in 1713).  The American Revolutionary War not only reinforced the importance of imperial defence strategies and colonial militias, but it brought tens of thousands of Loyalist refugees, many of whom were veteran soldiers.

Indeed, several current militia regiments trace their origins back to Loyalist units.  The War of 1812, the conquest of the West, the creation of a national militia at the end of the nineteenth century – these events continued to emphasize the mobilization of large segments of the population to fight in or support national wars, but only when needed.

In the twentieth century, Canada began sending large expeditionary forces overseas in support of Great Britain.  Canada’s military build-up during the world wars was so impressive, particularly in relation to its small population and industrial base, that the country gained international prominence and respect.  Several generations of Canadians experienced war directly.  Then, the Cold War and the continual threat of nuclear apocalypse pushed Canada to maintain continental defence with the United States, and international defence through NATO, while greatly influencing political policy and civilian life.  At the same time, Canada was an important part of a new internationalism expressed through the United Nations, employing small groups of professional soldiers in a variety of peacekeeping roles.

The end of the 20th century and the beginning of the 21st century constitutes a period of incongruity with this military tradition.  There is no clear enemy and victory is not obvious in Somalia, Rwanda, and Afghanistan as it was in 1815, 1885, 1918, or 1945.  Further, when we send troops to these places, we are not directly protecting Canada or its allies.  As a result, Canadians today do not have direct experience of war, and the conflicts that they do know have left an impression of futility.

Further, it has become apparent that our longstanding tradition of general mobilization at need cannot meet the demands of modern warfare.  War is no longer about how many battalions of infantry you can field.  It has become the arena of specialists operating modern tanks, jet fighters, warships, missiles and communication systems.  If Canada were to commit to mobilizing a larger force, how would we procure all of this specialized equipment, and how long would it take to train a new generation of soldiers, sailors, aircrew, logisticians, engineers, doctors, etc.?  How would we pay for it?

The alternative seems to be to develop a robust standing military force that has the training, experience and equipment needed to operate in complex modern conflicts.  Yet, many of our key military platforms have become or are becoming obsolete and so the Canadian military faces huge capability gaps.  From naval supply ships (one was recently towed back to Pearl Harbour) that will be decommissioned in 2016 but not replaced until 2020 to the F-35 fiasco, from too fragile submarines to too vulnerable jeeps, we are falling behind and we face serious questions about how we are going to even maintain existing, much less build new, military capabilities (such as in the Arctic) going forward.

There is no doubt that a certain romantic view of peacekeeping influences Canadian public opinion, but I think that there are larger forces at work here related to our long military tradition of militia and general mobilization.  This is one of the underlying reasons why Canadians are not sure if they want to support the larger and more capable standing military forces required for modern military operations including war but also a host of operations other than war (OOTW).

Canadians are certainly proud of our military tradition, in particular, our contributions during the world wars and to peacekeeping.  This is, of course, an idealized view of the past, but every nation indulges in this kind of epic mythologizing to some extent.  Canada is certainly fortunate to not have an obvious enemy.  We no longer have to send farmers to fight on colonial frontiers or teenagers to war on European battlefields.  This is a good thing.

But conflict and militarism have not disappeared in our world.  The question now is how to engage Canadian society in a meaningful discussion about contemporary foreign policy and defence challenges.  How do we build consensus and act confidently when faced with the complexity of these challenges as well as the pessimism of a seemingly ascendant global realism among political actors?  If general mobilization will no longer work, and small deployments of regular forces are not enough to maintain peace, how does Canada organize its military forces going forward? Reconstruction or nation-building can involve decades of work in a whole of government approach of which the military is only a small part.  Could Canada specialize in some kinds of reconstruction or humanitarian assistance, developing its military capabilities and force structure accordingly?  What kind of role do Canadians want to play in the world?  Does this even interest us anymore?

We need to develop a new vision for Canada that makes reference to our long military tradition and our more recent myth-making about peacekeeping, while responding to modern risks and uncertainties.  We need a vision that is at the same time realist and utopian, international and absolutely Canadian.  Canada has defined itself in part by its military exploits throughout its history.  How will Canada define itself in the 21st century?

Greg Kennedy is an assistant professor of history at the Université de Moncton.