Celebrate: to observe (a day) or commemorate (an event) with ceremonies or festivities ~Dictionary.com

Celebrations don’t have a particularly good reputation among professional historians … and, for good reason. As a series of studies of national, regionalized, local and provincial commemorative events demonstrate, celebrations are politically fraught. Canada Day might stand — at this point in our yearly calendar — as a case in point, but so too folk festivals, “old home weeks,” and the parade of militarily-oriented events ushered in by the current government. In the place that has become my hometown (Sackville, NB), a heritage site situated in a shady, quiet corner of town overlooking a swan pond celebrates the town’s “founders.” The town holiday is replete with a parade that will do much the same thing. Sometimes there are plays telling the story of local pioneers and recently the Baptist churches in town celebrated their 250th anniversary with a series of historical enactments, a video, and a massed church service that made frequent reference to the past.

Historians have been wary of such celebratory events because they don’t really tell us much about the past. Serious study of public history has been asking probing questions of such celebrations for some time. What is actually being celebrated? Whose history is constructed as history? Who is left out of this past and hence deracinated? 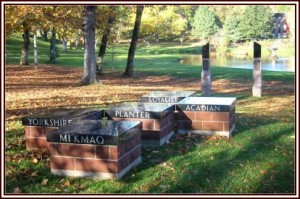 Sackville’s “Founders” monument is a case in point. It makes an effort to be inclusive, noting First Nations, Acadians, Planters, Yorkshire settlers, and Loyalists, but somehow managed to miss Black settlers. As my colleague Jennifer Harris has explained with regard to regional Black history, the effect of neglecting this history is to whiten the town and its surrounding region: to ground it in history, but to displace a marginalized population that has become demographically more marginalized precisely because of the biases that underscore such neglect.

This is a remarkably important critique because it shows how history is mobilized in ways that both reinforces existing power relations and mystifies the past. Yet, for those of us interested in an active history, there might be good cause to think again about celebrations, their potential, and how we can engage and participate in them.

I am not trying to add yet another item to historians’ already long “to do” lists. What I will suggest, however, is that celebration is one of the most common forms of history. It is widely practiced just about everywhere I’ve been in Canada and by most people I know. Some celebrations are built into calendars (for historical reasons!): Christmas, Easter, Canada Day, Labour Day, Victoria Day, etc. Others are built into our personal life: birthdays, anniversaries, graduations or class reunions. Some are institutional and others organized by friends and family. The book launch might be one with which a lot of academics are now familiar.

I don’t want to re-ask the same questions put forward in critical studies of public history. Instead, what I will do is ask us to think again about celebratory history using an example I have readily at hand: Sackville’ 250th Baptist anniversary. I’ll suggest that local engagement might be the most profitable way for historians to open up new lines of historical conversation. In effect, my argument is that historians can use celebrations as a way to participate in a discussion about the past and that this approach has a particular advantage: in engaging celebrations, historians are talking to a public that is already interested in the past. That is: they are discussing history with people of like mind, who do not need to be convinced that the past is important or that Canadians should know more about their history.

This is an important point and one that might be easy to forget. Local celebrations are often orchestrated by civic governments or local boosters within the boundaries of funding criteria provided by the state. But, this is not all they are, as Marc-André Gagnon’s recent post on Saint-Jean-Baptiste Day illustrates. The series of recent Baptist history celebrations in Sackville were organized by people who could hardly be called an elite. Some were middle class; some were working class, but one of the things they had in common was their willingness to commit time and energy. In fact, the amount of time and energy put into local celebrations can be surprising because it involves making videos, lobbying for heritage plaques, walking tours, fundraisers for local heritage sites, amateur plays (with scenery and costumes), among other things.

The recent Baptist celebrations in Sackville told a specific story: triumph over adversary. One can — and, should — question this narrative. I did. But, what struck me was how it resonated with the people who attended the events. They were interested in how settlers arrived in the area, the difficulties they encountered, and how they built long-standing, stable, and relatively prosperous communities. Much was edited out: the racism I’ve already mentioned is a case in point.

But I don’t think an active history engagement with local celebrations should be simply a matter of playing a feel-good story off against the cold reality of the disturbing and dehumanizing elements of the past. There is, one might hope, a different way of looking at these celebrations that raises important critical questions of the past but which does not become a binary good/bad dichotomy.

What I noticed about these celebrations were two things. First, the “triumph over adversity” narrative disguised interest in the past for its own sake. In the process of telling this story, the local celebrations opened up a window onto the social history of south-eastern NB. They asked key questions that historians ask: why did settlers come to this region? How did they live when they got here? How did they work? What did they eat? What culture did they bring with them and how was that culture changed by the new circumstances in which the settlers found themselves? What was the character of their spiritual beliefs? How did this affect their lives, the way they raised children, and how they related to each other and different communities? To put this in different terms, the celebration was not the endpoint but appeared more as the opening of a conversation that a great many local people wanted to have about the character and nature of the past.

The second thing I noticed was that this triumphalist narrative also disguised an often poorly articulated deeper level of disquiet. When I raised questions about the events to friends — such as: where are the First Nations? — that challenged the celebratory narrative, I found a ready audience. Not everyone agreed with everything I was saying, but nor should they. The important point was that they were interested, willing to talk about the past, and willing to recognize its problematic character. Even more to my surprise was their willingness to talk about how the deeply disturbing elements of the past affected the present. In other words, while there was an interest in the past for its own sake, the people to whom I spoke also saw the past and the present as intricately interconnected. The way in which specific groups of people were marginalized in the past affected social, political, and economic relations in the present.

It would be wrong to overstate this point. Local historical celebrations draw a range of different commentary and not everyone approaches history in a particularly enlightened or constructive way. In discussing the past with participants in celebrations, one hears a lot of the old saws “you cannot judge the past” or “yes, but in his context, he was a great man.” We might easily dismiss such comments or become angry about them and I’ve done both things over the years. But, we might also remember that the audience to whom we are speaking might be broader than the specific person with whom we are talking at that precise moment. If racializing apologetics come quickly to some people’s lips, probing questions and openness come just as quickly to others.

How can those of us interested in active history engage celebrations in a constructive way?

I will conclude by arguing that those of us who are professional historians can answer this questions in a wrong way and a right way. The wrong way is to claim some sort of authority: the I-will-tell-you-the-truth-about-the-past approach whereby professional historians assume the role of arbitres of accuracy. We can and should still develop critical studies of public events and celebratory history and I think this can be done alongside a more diffuse engagement with local events. Engagement in local events should not be an either/or option played off against effective scholarly study and writing against popular engagement. Historians can do both.

The right way is to become part of a conversation. Without telling people that their presentation of the past is inaccurate or that their narrative is misguided (a problematic contention, at any rate), there is much to be gained by listening and talking. I find that the people with who I spoke already respect the work of professional historians. In addition to being interested in the past and seeing a connection between the past and present, I find many people understand that historians have knowledge, questions, and research tools that they don’t have. If someone wants to ask a professional historian a “tough question”: fair enough. We should be able to answer those questions. If we can’t … that is a problem that really does need to be addressed.

What I am saying is this: historians can approach local historical celebrations in a meaningful way by seeing them as an opportunity to have a conversation about history, its meanings, and its connections to the present. In having that conversation we will, I think, find a ready audience. We cannot and should not approach local celebrations as authority figures who bring truth. My guess is that that will simply alienate our audience. Approached in a different way, however, the audience we will find might surprise us in their interests, willingness to learn more about the past, and willingness to see its legacy in the present.

One thought on “Celebration as History; History as Celebration”