This week ActiveHistory.ca has focused our attention to the legacy of Sir John A. Macdonald. In less than a week’s time, Canada will be in the throes of one big Sir John love-in. On 11 January, this country’s first prime minister will be celebrating the 200th year since his birth in Glasgow, Scotland. Over the course of this week, we’ll bring you essays on Sir John’s legacy regarding Indigenous peoples, immigration and the broader politics of his time. In doing so, we aim to present and assess Sir John in all his complexity. Neither then, nor now, has Canada’s first prime minister been universally celebrated and loved. 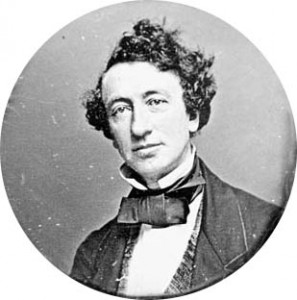 As we move into an election year, with the 150th anniversary of Confederation just around the corner, the time is ripe for a more complex remembering Sir John’s legacy. Current government policies align well with some of Macdonald’s key platforms. Although pipeline development doesn’t have nearly the same overwhelming support as Macdonald’s emphasis on railways, wrapping the country in a ribbon of steel has been a strong emphasis of Stephen Harper’s economic strategy. Similarly, the Conservative’s Economic Action Plan, will likely be situated beside Macdonald’s National Policy as Harper’s most significant legacy (at least among sign-makers). And perhaps most fittingly, Stephen Harper’s resistance to addressing the structural issues leading to the alarming number of missing Indigenous women and men (and elevated rates of incarceration) has significant parallels with Macdonald’s failure to address the root causes of the famine on the Prairies during the late-1870s and 1880s. Both leaders, of course, also faced serious allegations of cronyism at times when their parties stand accused of significant electoral misconduct (see Elections Canada’s depiction of nineteenth-century elections for examples about Macdonald; Accusations against the current Conservative government [and their responses] can be found here, here, and here).

There are, of course, also many differences between Macdonald’s time and today. Stephen Harper’s government has focused on shrinking the role of the federal government and diminishing the importance of the civil service (the Toronto Star recently put together a useful graphic outlining the extent and severity of Conservative cutbacks). Macdonald was a champion of the bureaucracy and sought to bring Canadians together, rather than dismantling the apparatus of the state and moving towards a more decentralized and individualistic governance structure. Another important difference lies in their approach to immigration. Macdonald oversaw a far more racist Indian Affairs Department than exists today, the imposition of the head tax on Chinese immigrants and generally pursued a policy where, as Tim Stanley will demonstrate tomorrow, “the Aryan races [Macdonald’s “Canadians”]” must be encouraged to resist efforts to “wholesomely amalgamate with the Africans or the Asiatics.” Understandably, the Federal Conservatives have been very active maintaining Trudeau’s vision of a multicultural Canada, off-setting some of the rougher edges of racism in Canada.

Why begin this series by comparing Macdonald’s and Harper’s Conservative governments? Framing Macdonald in this way helps us move beyond the polarized debate that surrounds Canada’s first Prime Minister by demonstrating its deep roots in partisan politics. Macdonald was stuck in the political muck in much the same way as Stephen Harper, Elizabeth May, Tom Mulcair and Justin Trudeau. Canadians had strong views about their Prime Minister’s leadership, and not all of them were supportive.

Rather than reflecting on these complex political realities, the tenor of discussion about Sir John today tends to fall into one of two simplistic and polar camps. Macdonald was either responsible for creating “Canada-the-good” or, he was the root of everything that is wrong with this country. This dichotomy was most recently demonstrated in the Walrus by two op-ed pieces. The first, by Stephen Marche, questioned why we would celebrate Macdonald at all. The second, a response by Sir John’s greatest twenty-first century admirer (Toronto Star columnist Richard Gwyn) considered Marche’s essay “an insult to our history.”

There’s some truth to both perspectives and ignoring one or the other does a disservice both to Sir John and his complicated legacy. Put simply: For both good and bad Canada would not look the way it does today without Macdonald; while at the same time, Canada’s specific nature was shaped by many other people (there’s good reason we focus on the collective “Fathers of Confederation” rather than any one man) and Macdonald’s personal outlook on civic life, which undoubtedly shaped some of our current structural problems, was one that most of us would find repugnant today (and many did during his time too). A fair assessment needs to strike a balance between the role Sir John played in building Canada and the compromises he was all too willing to make in order to unite the colonies of British North America.

What rendered this complex picture of Canada’s first Prime Minister clearest to me was the discovery of what has become one of my favourite online resources for visual teaching material: the Begbie Contest Society’s “Canadian Primary Sources in the Classroom.” Its collection of mid-to-late-nineteenth-century political cartoons (among other more recent graphic material) does an excellent job at contextualizing Sir John’s mixed influence. In examining just a few of these drawings, it is quick to see how Canada’s first Prime Minister occupied a somewhat contested space over Canada’s first quarter century. 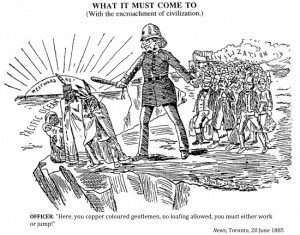 Let’s first look at my personal favourite. In “What It Must Come To,” published in Toronto’s News, police officer Sir John forcefully separates western Indigenous peoples from the arrival of colonial settlers. In an all too accurate depiction of life on the Prairies in the 1880s, the cartoonist has captured the reality of Canada’s westward expansion. Through the imposition of British law, military and police force, Indigenous spaces were to be transformed with or without the agreement of those people already living on the Land. 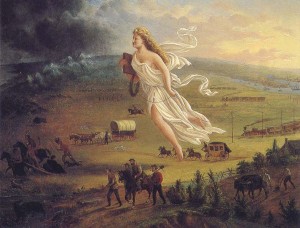 Though I suspect that in 1885 this cartoon would have had positive connotations, what I like about it is that it can also be read as a condemnation of the actions of the Canadian state. When we situate this cartoon beside the well-known painting American Progress we can see a fundamentally different story in how the west was settled. There was no manifest destiny in Macdonald’s Canada according to this cartoon, just the brutal swat of the government’s billy club. 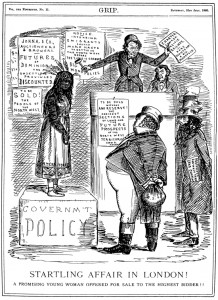 Sticking to Macdonald’s Indian policy for a moment is a visceral political cartoon from a late July 1880 edition of Grip magazine. Founded by Liberal J.W. Bengough Grip had a long track record of critiquing Macdonald and his government. It is no surprise then that here, Macdonald, the auctioneer, is seen selling “the people of the Northwest” to make way for colonial settlement. Much like in “What It Must Come To,” Sir John is positioned not as a great bridge builder, but rather as morally suspect. By way of contrast, “The Great Pow-Wow”, published in Toronto’s Arrow situates Macdonald as a benevolent provider and – to a certain extent – as a bridge builder. 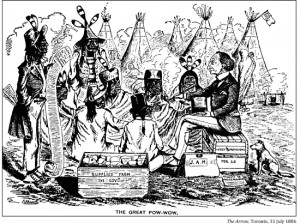 But even in this cartoon, popular perception of Macdonald as a bit of a slick-willy slip through. Canada’s first P.M. sits on a box labeled “votes for provisions.”

Grip made its name in breaking the Pacific Scandal. The magazine was unrelenting in its overall critique of Macdonald’s railway policies. As the scandal broke, Grip published the cartoon “Whither are we Drifting?” with a triumphant Macdonald subduing Canada with his foot on her neck. Grip was not alone, though, in critiquing the government. In “The Lion’s Share” Montreal’s Le Canard reveals Quebec’s concerns with the railway’s development. The cartoon places Macdonald alongside opposition (Liberal) leader Alexander Mackenzie, as the dog Columbia feasts alongside a famished Lower Canada. 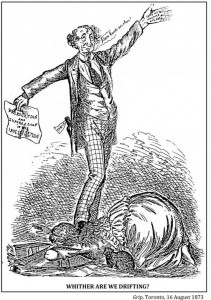 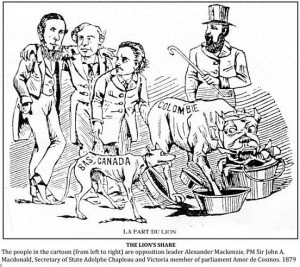 Obviously, not everyone critiqued the project, the Canadian Illustrated News, for example, situates Macdonald beside a grumpy Uncle Sam, emphasizing the way in which Macdonald’s policies separated Canada from the United States. 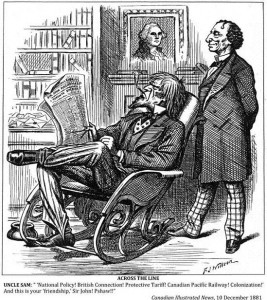 Much like we see with First Nations, editorial cartoons provide a mixture of opinion about Macdonald and the overall benefit of the railroad. At the end of the nineteenth century, Macdonald’s legacy was far from clear.

Even in terms of labour and the economy, reviews of Macdonald’s tenure are mixed. In 1878, Montreal’s Le Canard published the cartoon”Protection.” The overall meaning of the cartoon is rendered somewhat ambiguous by the near bursting look of the country being filled up with golden waters. 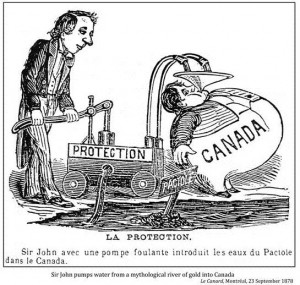 Nonetheless, it is clear that Macdonald’s protectionist policies were favoured. When it comes to labour, however, cartoon reviews of Macdonald’s policies are less glowing. In 1887 the Toronto News published “The Old Attitude of the Labor Giant.” In this cartoon, Macdonald and the political class stands accused of oppressing workers. A year later Grip took a similar approach to Macdonald’s stance on labour and protection, emphasizing Macdonald’s inability to protect workers as well as businesses. 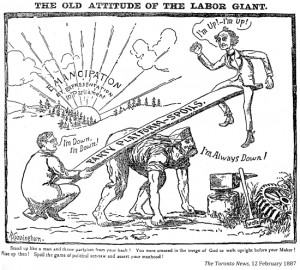 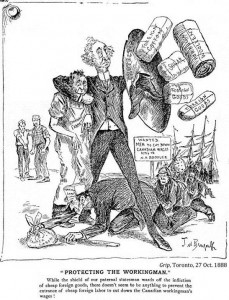 The central point in drawing your attention to these cartoons has been to demonstrate the complexities of Macdonald’s legacy. Much like Stephen Harper and Canada’s other political leaders, Macdonald’s leadership was contested and his policies questioned both then and now. Through the posts that will follow over the coming days, it is our hope that a more complex and nuanced discussion of Canada’s first prime minister will shape the commemoration of his 200th birthday.

Tragically, one of the scholars we asked to contribute, Christa Zeller Thomas, died unexpectedly over the holidays. Christa created the wonderful website Women of Confederation and had intended to post an essay with us on the life and role of Sir John’s second wife Agnes. Though her untimely death prevented her from contributing to our project, readers interested in Macdonald and Confederation would be wise to consult this important online resource.