by Daniel Macfarlane [Originally published on the Otter]

Niagara Falls has frozen. Well, not really. The entire water flow of the famous Horseshoe Falls doesn’t actually freeze, despite ‘polar vortexes’ (more commonly known to most Canadians as ‘winter’). Water keeps flowing underneath the ice. The American Falls does occasionally dry up due to ice jams upstream (and this has happened once in recorded history to the Horseshoe Falls: see note [1]). Tourists are nonetheless flocking to see the gelid cataract – and some people are even climbing it! 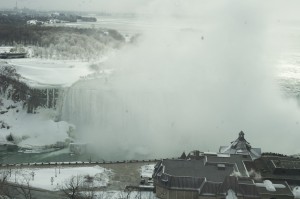 Wind can send large chunks of ice from Lake Erie down the Niagara River. Ice jams at the base of the waterfalls form what are known as “ice bridges.”  In the 19th century these congealed water spans became an occasion for festivities, as the two Niagara Falls communities on either side of the international border would use them for transnational ice parties. Talk about having a drink on the rocks! 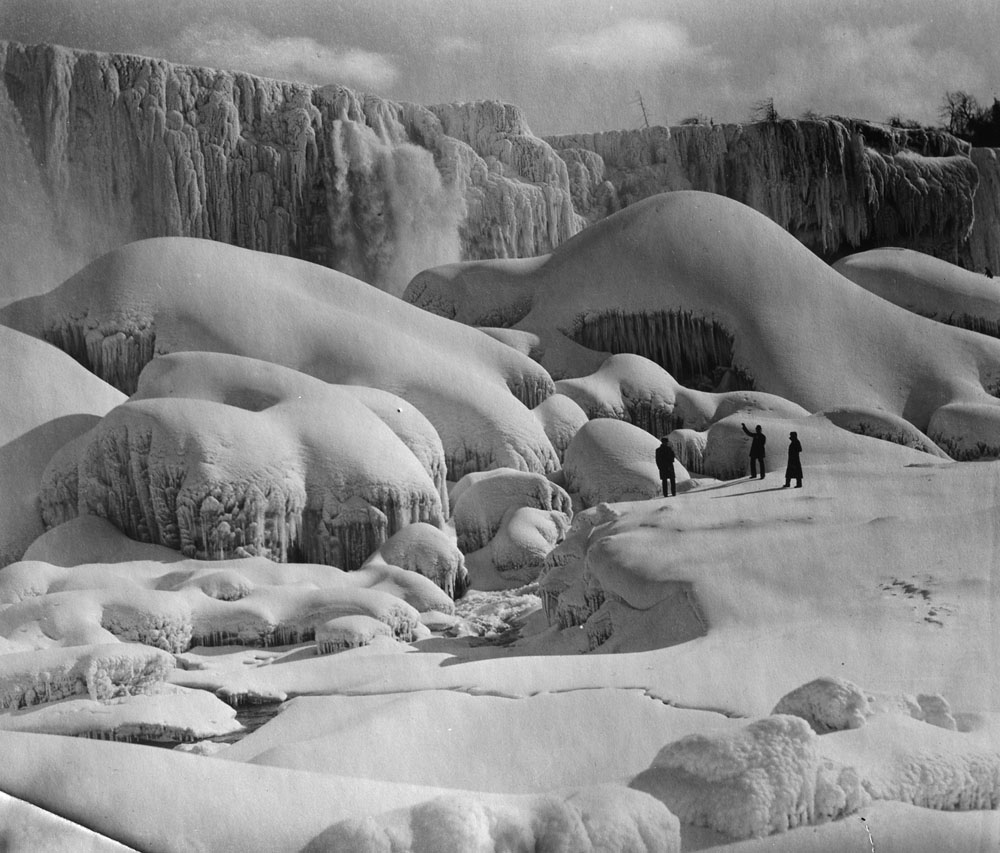 Niagara Falls Ice Bridge around the turn of the century. Wikimedia Commons

That is, they had ice parties until one fateful day. On February 4, 1912, the ice bridge broke away and raced downstream. 3 people perished. From that point on, such festivities on the ice were prohibited.

But that wasn’t the end of disasters related to ice build up. In 1938, another ice bridge broke free and took out the famed Honeymoon Bridge (see a video of the collapse here).

Ice-induced collapse of the Honeymoon Bridge in 1938. Wikimedia Commons

Obviously there was an ice problem, at least from an anthropocentric perspective.

But ice wasn’t the only aspect of the Niagara system that Canadian and American officials wanted to change. Bilateral efforts had already led to the diversion of massive volumes of water around the falls for hydro and industrial production. These efforts reached their apogee with the 1950 Niagara Treaty. This accord authorized the remaking of the actual waterfalls themselves, with up to ¾ of the water diverted around the waterfall to power stations downstream.  I won’t get into all that, however, since I’ve previously done so on the NiCHE website and other places. [2]

Ice jams don’t jive too well with a highly regulated hydraulic engineering system, which is what Niagara now was. Seeing as how Canadian and American engineers had just given this great – and powerful – natural icon a facelift, regulating ice formation might have seemed like small potatoes by comparison. Yet controlling ice formation in the Great Lakes-St. Lawrence basin had long been marked by scientific uncertainty –   a few years earlier, many of the same officials and engineers spent a great deal of time and effort trying to figure out how to control ice formation on the newly-created St. Lawrence Seaway and Power Project. [3] Indeed, I’ve seen the ice problem come up frequently enough in my research on water and hydro developments in the Great Lakes-St. Lawrence basin that I had flagged a few sources and made a mental note to come back to it at some point in the future.

To deal with the Niagara ice issue, in the 1960s the International Joint Commission (IJC), the binational body responsible for border waters, approved the construction of an ice boom to be located where Lake Erie debouches into the Niagara River. 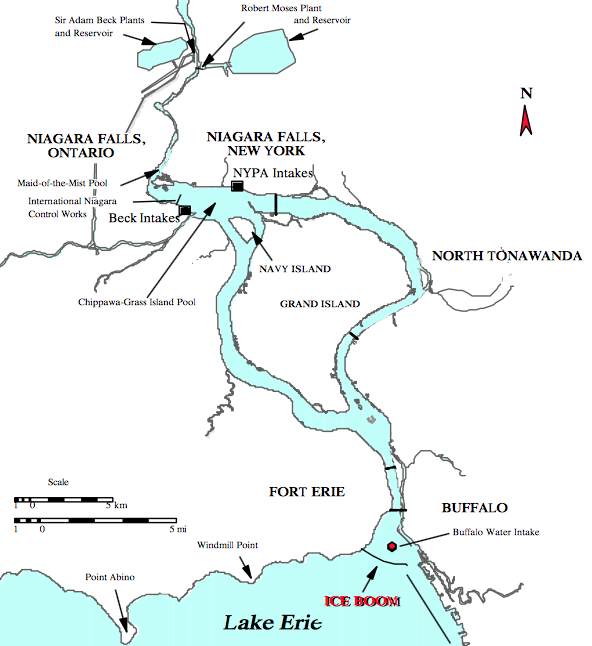 First installed in 1964, the purpose of the Niagara River Ice Boom is to reduce large-scale ice blockages, such as those that result in ice bridges at the foot of the falls. Other benefits of reduced ice formation included the prevention of shoreline flooding and scouring, and ice buildup at the water intakes for the hydro power plants. 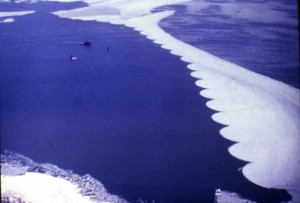 The IJC’s International Niagara Board of Control oversees the ice boom’s installation and removal. The boom was initially made of wooden timbers; now it is several hundred 30-foot pontoons. Ice cutters are also employed immediately above the falls. The boom is usually installed around mid-December, depending on temperatures. The Board of Control also operates video cameras mounted on top of tall buildings, and the feed is available to the public: http://www.iceboom.nypa.gov. Kind of the opposite of watching a pot boil (though time lapse videos can be quite interesting).

Ice bridges at the falls are, as a result, a thing of the past. Interestingly, since the boom causes large ice fields to congeal, there have been public complaints that this affected the local climate, prolonging the cold and ice in the spring.

Whether or not much of Horseshoe Falls freezes is of course dependent upon climactic conditions. But the ice formation process is also highly regulated by humanity. Thus, like the actual waterfalls themselves, the ice regime at of the Niagara River is a sort of borderlands hybrid envirotechnical system.

So should we ruin the illusion of the tourists flocking to see the ‘frozen’ Niagara?  If they had shown up a little more than a century earlier, they could have been dancing and socializing at the base of the waterfall. But they might also have ended up floating downstream toward the whirlpool on a raft of jagged ice. Probably wise to settle for the view from Table Rock or Terrapin Point. And think about the ways we try to manipulate the natural world.

[1] Ice can stop the flow of water over the smaller American Falls. This has happened at least 5 times. And it happened once in recorded history at the Horseshoe Falls: for a little over 24 hours in late March 1848 Horseshoe Falls stopped because of an ice jam at the start of the Niagara River. (David Phillips. “The Day Niagara Falls Ran Dry,” Canadian Geographic 109, no. 2, April/May 1989, 11)

[3] See Chapter 6 of Daniel Macfarlane, Negotiating a River: Canada, the US, and the Creation of the St. Lawrence Seaway (Vancouver: UBC Press, 2014).

One thought on “An (Ice) Bridge to the Past: Niagara Falls has Frozen”